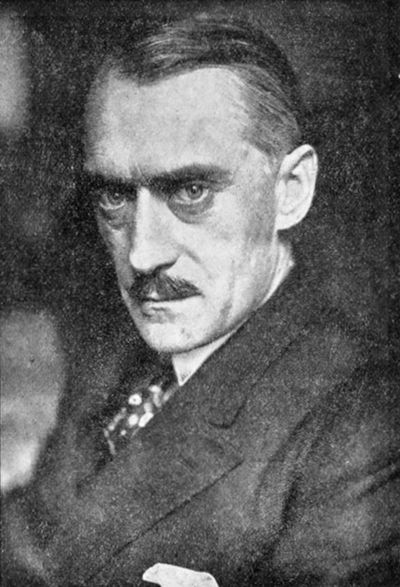 Leonhard Frank (September 4, 1882 in Würzburg - August 18, 1961 in Munich) was a German expressionist writer. He studied painting and graphic art in Munich, and gained acclaim with his first novel, The Robber Band (1914, tr. 1928). When a Berlin journalist celebrated in a famous café about news of the loss of the ship RMS Lusitania, torpedoed by a German submarine, Frank was upset - and slapped the man in his face. That is why he went into exile in Switzerland (1915-18), where he wrote a series of pacifist short-stories published under the title Man is Good. He returned to Germany, but after the Nazis gained power in 1933 Frank had to emigrate a second time. He lived in Switzerland again, moved to London then Paris and finally fled under adventurous conditions to the United States in 1940, and returned to Munich in 1950 following the war. His best-known novels were In the Last Coach (1925, tr. 1935) and Carl and Anna which he dramatized in 1929. In 1947 MGM made a movie titled Desire Me out of this story.