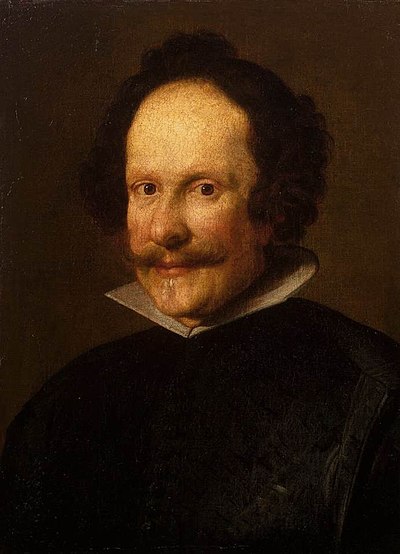 Claudio Coello (2 March 1642 – 20 April 1693) was a Spanish Baroque painter. Influenced by many other artists, including Diego Velázquez who was also of Portuguese descent, Coello is considered the last great Spanish painter of the 17th century.The son of Faustino Coello, a famous Portuguese sculptor, he was a court painter for Charles II. He worked on many churches and public buildings in Madrid, with his most famous work being in the sacristy of El Escorial, which is filled with portraits of priests and courtiers.Claudio Coello was of Portuguese parents, but was born at Madrid in 1642. He was there instructed in the art by Francisco Rizi, and executed while yet in that school an altar-piece for San Placido at Madrid. His acquaintance with the court painter, Juan Careño, procured him the permission to visit the royal collection, where he made his greatest advance by studying the works of Titian, Rubens, and Van Dyck. His friendship with José Donoso, under whom he studied at Rome, was not less advantageous for him. In conjunction with that artist he painted frescoes at Madrid and Toledo, and executed the Triumphal Arch for the entrance of the Queen, Maria Louisa of Orleans. By these paintings he became well known, and was employed by the Archbishop of Saragossa in 1683. He was made painter to Charles II, by whom he was employed in the Escorial. Coello never travelled out of Spain, and his extraordinary talents are only known in that country. He was the last Spanish painter of eminence, as from the time that Luca Giordano was summoned to Spain, the art sank gradually to its decay. Many excellent specimens of his ability are to be seen in the churches and convents at Madrid, Saragossa, and Salamanca. But his principal work is the famous altar-piece in the sacristy of San Lorenzo, in the Escorial, representing the 'Adoration of the Miraculous Host.' It is an immense composition, and occupied the painter seven years. In the crowd of personages that form the procession, are no less than fifty portraits, including those of the king and the principal persons of the court: it is painted with the utmost precision, yet in a bold and masterly style, and there is a majestic solemnity in the arrangement of the whole, which suits well to the grandeur of the subject. It is a very extraordinary performance, and holds its place even by the side of the works of Titian and Rubens. The preference which was given to Luca Giordano, who came to Madrid in 1692, in painting the grand staircase in the Escorial, mortified Coello so much that he died of vexation at Madrid in 1693. Coello etched three plates, viz. : — 'Christ on the Cross, with the Virgin, St. Augustine, and St. Monica,' and the portraits of Charles II and his Mother. He was the instructor of Sebastian Muñoz and Teodoro Ardmans. The following is a list of his best paintings: Budapest Gallery. St. Joseph with the Virgin and Child.Madrid. S. Placido. An altar-piece.Madrid, Palace. Cartoons, representing the Fable of Cupid and Psyche, painted by Ant. Palomino.Madrid, Museum. Assumption of the Virgin (Two), Portrait of Charles II. of Spain, St. Bosa of Lima, and The Apotheosis of St. Augustin.Munich. Gallery. St. Peter of Alcantara.Petersburg. Hermitage. His own Portrait and The Magdalen.Saragossa. Augustinian Church. The frescoes in the cupola.Madrid (province). El Escorial. The Adoration of the Host. (His chef-d'oeuvre.)Saint Catherine of Alexandria Dominating the Emperor Maxentius