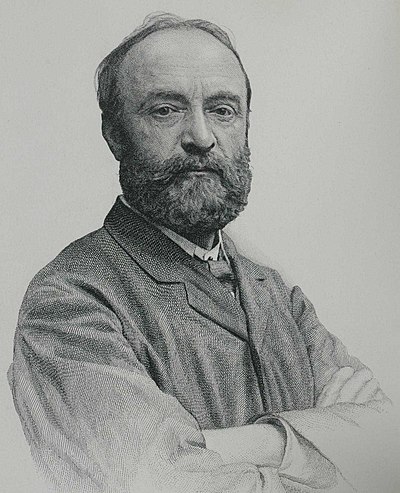 Michel Marie Charles Verlat (25 November 1824 – 23 October 1890) was a Belgian painter from Antwerp. He was a pupil of Nicaise de Keyser, and studied at the Antwerp Academy.In 1842 appeared his first important picture, Pippin the Short Killing a Lion. About 1849 he went to Paris, where he worked under Ary Scheffer. In 1855 he won a gold medal at the Exposition Universelle at Paris with his Tiger Attacking a Herd of Buffaloes, and in 1858 exhibited Le Coup de collier (now in the Royal Museum of Fine Arts at Antwerp) at the Paris Salon.In 1866 he was appointed director of the Academy at Weimar, where he painted some fine portraits, notably those of the grand-duchess of Saxony and of the musician Liszt. Soon after his return to Antwerp in 1875 he visited Palestine, and brought back a large number of interesting pictures, including Vox Populi (Royal Museum of Fine Arts, Antwerp), The Tomb of Jesus, and The Flight into Egypt. In 1885 he was appointed director of the Antwerp Academy.Other important works by Verlat are the panoramas of the battle of Waterloo and the treaty of San Stefano, Christ between the Two Thieves, Defending the Flock (Royal Museum of Fine Arts, Antwerp), Oxen Ploughing in Palestine (Royal Museum of Fine Arts, Antwerp), Godfrey of Bouillon at the Siege of Jerusalem (Brussels Gallery), and Sheep-Dog Defending the Flock (Brussels Gallery). He executed a series of original etchings, and published in 1879 a book on the Antwerp Academy. He died at Antwerp.