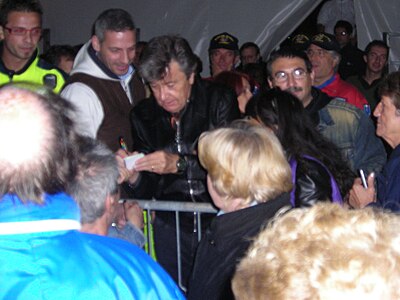 Bobby Solo (born Roberto Satti, 18 March 1945) is an Italian singer and musician.Solo was born in Rome to an Istrian mother and Friulan father.In 1964, he participated in the Sanremo Music Festival with the song "Una lacrima sul viso" ("A Tear on your Face", written by "Lunero"), but he was disqualified for singing with playback which was contrary to the festival regulations. The song, however, became a global hit. It was the first record to sell over one million copies in Italy, and global sales exceeded three million. It was awarded a gold disc. In the following year Solo won in the festival with the song "Se piangi, se ridi". He participated with the same song in the Eurovision Song Contest and finished in fifth place. Again in 1969 Solo participated in the Sanremo Festival, with the song "Zingara", together with Iva Zanicchi. His last participation in the festival was in 2003 (together with Little Tony), singing "Non si cresce mai".