From crimes of passion and criminal gangs, explore these true crime stories about trials and criminals in early 20th century France

Crime fiction is one of the most successful book genres in Europe - people are fascinated by dark stories about murder, crime and detectives. Stories about crime and criminals in early 20th century France can be found in our collections, so prepare to read some true crime stories! 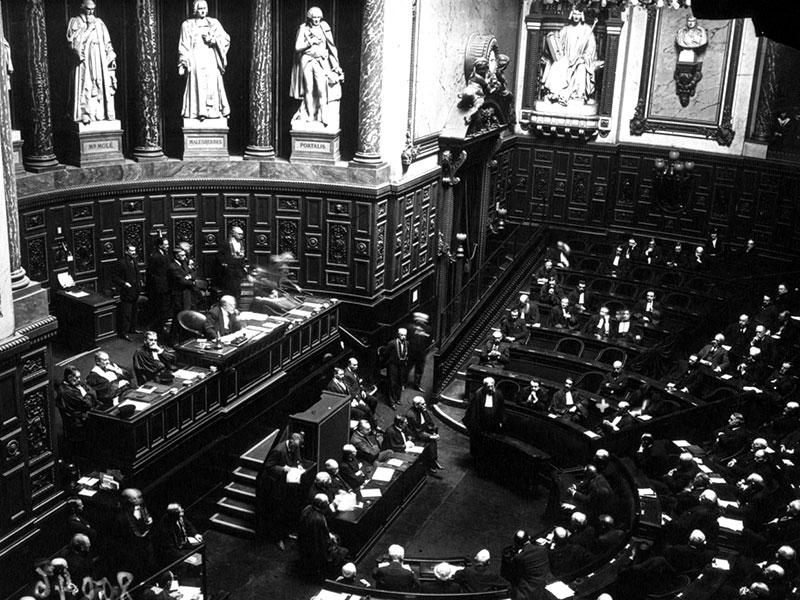 This gang “La bande à Bonnot” terrorised the French middle-classes during the Belle Epoque, in 1912 and 1913.

They were an anarchist group of men and women who used new technology for their robberies and thefts that weren’t available to the police yet, such as repeating rifles and cars. They were the first gang ever to use a get-away car, and became known as ‘the auto bandits’ by the French press.

These advantages lead to them mocking the police, even going as far as sending them their fingerprints - a technique the French police were not using at that time.

EXPLORE MORE: Photographs and paintings about la bande a Bonnot

Their most prominent member was Jules Bonnot, an anarchist from Northern France, who was shot in 1913 trying to escape from the police.

During their trial in 1913, most of the members were sentenced to death.

The man behind the mugshot

That we can actually see photographs of criminals is due to this man: Alphonse Bertillon. He invented the genre of the mug shot only a few years earlier in 1900.

The term mugshot actually dates back to the 18th century, derived from an English slang word for face. Although mug shots were taken earlier in Belgium, US and UK, in 1888 Bertillon standardised the angles and procedure of how criminals were portrayed.

The trial of Henriette Caillaux

Trials are a fundamental right in European democratic law. But some of them attract more public attention than others.

The trial of Henriette Caillaux was one such. Though they were both married, the French Minister of Finance and Henriette had an affair. Having divorced and later married in 1911, they became one of France’s wealthiest couples.

When her husband was put under pressure by journalist Gaston Calmette because of political issues, she feared that he would publish love letters proving they had had an affair while married. The only possible solution that she saw was her husband challenging him in a duel to save his reputation, she decided to act herself.

Waiting for Calmette in his newspaper's offices, she pulled an automatic pistol out of her fur muff and shot him dead. She waited calmly for the police to arrive, refusing to be driven by them to the police station. She preferred to be taken there by her own chauffeur.

During her trial, many of the most powerful members of French society were present. Her lawyer persuaded the jury that her uncontrollable female emotions resulted in this crime, which she didn’t deny.

She was acquitted in 1914 and continued her life, even publishing a book and received a diploma from the École du Louvre.