This is a story about a Serbian writer and traveller who chose to lead a very different life to the one expected of a woman born and raised in the patriarchal Serbian society of the 19th and early 20th century. Brave, educated and self-aware, this remarkable woman was a poetess, a novelist, and a writer of travelogues and she has remained an inspiration to this day. 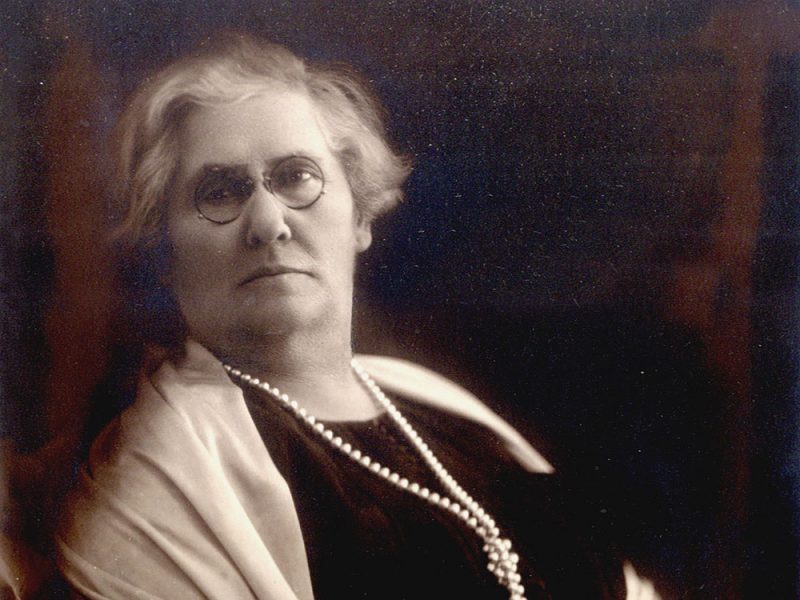 Jelena Dimitrijević (1862-1945) was born in Kruševac, a small town in central Serbia. Born into a wealthy family, Jelena was able to get a good education. However, when she was very young, an eye injury forced her to quit school and the doctors even forbade her from reading or writing. Disregarding the doctors’ advice, Jelena continued her education at home with private tutors. She never stopped educating herself for her entire life.

Jelena and her husband moved to Niš in 1881. Niš had just been liberated from the rule of the Ottoman Empire in 1878 and the town was still filled with Oriental flavours and ways of life. Jelena was fascinated with Niš and its residents, especially with Muslim women. She managed to get a privileged look into the lives of Muslim women, went behind harem walls and discover their well-guarded secrets. In 1897, Jelena published ‘Letters from Niš about Harems’ (‘Pisma iz Niša o haremima’), the very first Serbian prose book written and published by a female author.

While she was still in Niš, Jelena also published her first book of poetry, signing it only with her first name. Immediately, rumours about the identity of the poetess started spreading all over Niš and people claimed she was a runaway Turkish girl.

Wanting to learn more about the life of Muslim women, Jelena later travelled further east and documented her travels and experiences in the travelogue ‘Letters from Thessaloniki’ (‘Pisma iz Soluna’) as well as in the novel ‘The New’ (‘Nove’).

At the beginning of the 20th century, Jelena and her husband moved to Belgrade, the capital of Serbia, where she quickly became a prolific writer and a member of the Serbian Writers’ Society. 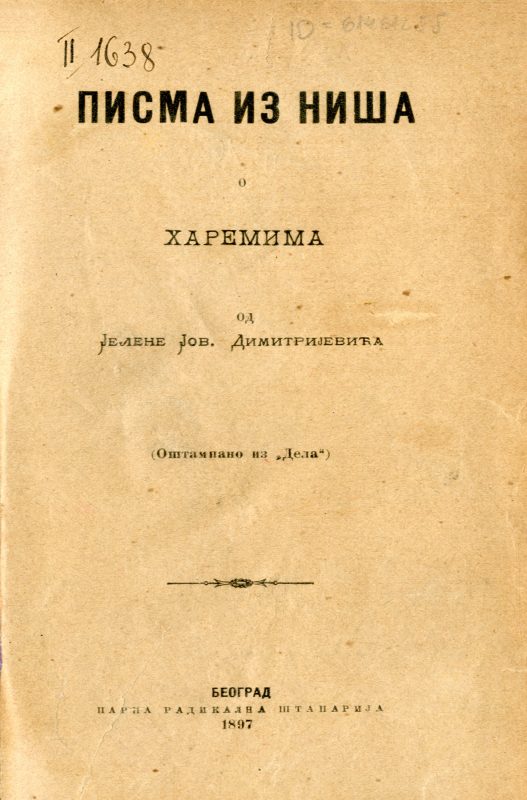 Jelena Dimitrijević was well educated, talented, self-aware and very bold and, in the 19th century patriarchal Serbian society, this made her quite unique and very different from the majority of women. She was a polyglot and spoke German, French, Greek, Russian, English and, due to her fascination with the Orient, Turkish as well.

Jelena travelled extensively - before the First World War, she visited Germany, Switzerland, Italy, Greece, and from 1919 to 1927, France, Spain, England and America. Her continued fascination with the Orient led her to explore not only Egypt, Palestine, Syria and Lebanon but also India, Japan and China. She funded the majority of her many travels herself.

As a feminist, Jelena was proud to have met Mrs Hoda Sha’arawi, the founder of the Egyptian Feminist Union. As a writer, she had an extraordinary opportunity to meet Rabindranath Tagore. Jelena’s travelogues include works such as ‘The Seven Seas and Three Oceans’ (‘Sedam mora i tri okeana’), ‘Letters from India’ (‘Pisma iz Indije’) and ‘Letters from Misir’ (‘Pisma iz Misira’).

An inspiration to others

Jelena Dimitrijević had been forgotten in Serbian history and literature for a long time. However, in the 1980s, the interest in her life and writings was revived and she has since been republished, studied and talked about by Serbian students, scholars, feminists and female writers. In the 21st century, the life story of Jelena Dimitrijević still continues to inspire. Readers can find many publications by and about her at the National Library of Serbia.