The story of Monopoly

How Charles stole Lizzie's idea and made his fortune

'Hepeating' might be a new word, but the concept it represents is tried and tested. Woman comes up with great idea. Man takes it and passes it off as his own. Man receives great acclaim. Woman doesn’t make a fuss. Add in a dinner party ending in a broken friendship, a courtroom revelation, and escaping prisoners of war, and you have the story of one of the world’s most popular board games, Monopoly.

The story begins in 1903 in the United States. Elizabeth Magie came up with a board game called ‘The Landlord’s Game’. She wanted to use it as an educational tool to teach people about the single tax theory of Henry George. He thought that land and natural resources belonged to the people, and they should rent it but never own it. And that governments should only charge tax on land, not on improvements, labour or profits. In the instructions that came with the game, Magie wrote:

‘Let the children once see clearly the gross injustice of our present land system and when they grow up, if they are allowed to develop naturally, the evil will soon be remedied.’ source

The Landlord’s Game had a board around which were various different properties, their purchase price and rental value. There were also utilities, and chance cards. Sound familiar? 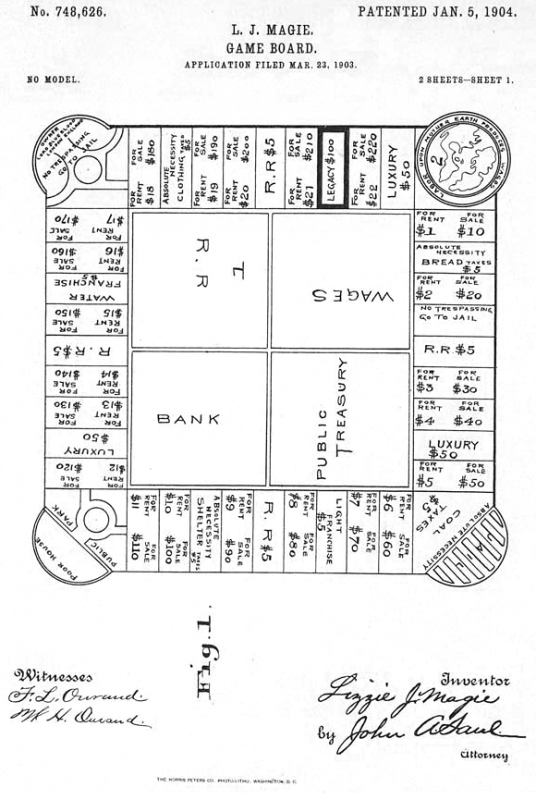 By Drawing for a Game Board, 01/05/1904. This is the printed patent drawing for a game board invented by Lizzie J. Magie. From the U.S. National Archives. Public domain. Source: Brian0918 Wikimedia Commons

She took out a patent in 1904 and self-published it in 1906. In 1909, she approached manufacturer’s Parker Brothers, who rejected the game on the grounds that it was too complicated.

How Charles Darrow came upon it

In 1932, a man called Charles Darrow went to dinner at the home of his friend, Charles Todd. After dinner, they played a few rounds of The Landlord’s Game, in which Darrow took a great deal of interest.

Not long after, Darrow took an idea to Parker Brothers and in 1935, they published the game Monopoly, complete, it is thought, with a spelling mistake copied directly from The Landlord’s Game.

The Todds and the Darrows fell out and never spoke to each other again. Players of after-dinner board games, take note!

Covering up the truth

Parker Brothers bought The Landlord’s Game from Lizzie Magie for the sum of $500 in 1936 in a deal that included zero royalties, ever. She refused to have any changes made to it, but made no demands to promote it, and no objections to the manufacturing of Monopoly. A 1936 newspaper article reported that she said it was ‘all right with her if she never made a dime so long as the Henry George single tax idea was spread to the people of the country.’ In a sworn testimony many years later, Parker Brothers’ president described how he saw the little old grayhaired Quaker woman as ‘a rabid Henry George single tax advocate, a real evangelist’.

That same 1936 newspaper article recognised Magie’s The Landlord’s Game as the source of the game Monopoly. But determined to deny it, Parker Brothers included information in every box of Monopoly crediting Darrow as its creator. It would be 40 years until the truth was widely known.

And uncovering it again

25 years after Magie died, another game designer, Ralph Anspach, was in a legal battle with Parker Brothers over his ‘Anti-Monopoly’ game. Parker Brothers claimed he was violating their copyright. Anspach, during his research to support his own case, turned up Magie’s patents and used them in court.

Today, Monopoly is in the top five most popular board games worldwide - up there with chess, Scrabble, checkers and backgammon. Monopoly is licensed in 103 countries and printed in 37 languages.

There are versions covering 32 European countries, with many having bespoke localised editions. There are almost 100 versions for different towns, cities and regions of the United Kingdom. There’s even one for the fictional setting of TV soap opera, Coronation Street. France is gamified in nearly 50 editions and Germany in 35.

And so did the British Secret Service

Adversity makes people creative. And while some resorted to making their own cardboard versions of Monopoloy in the Second World War, a very special edition was being created in the UK.

In 1941, the British Secret Intelligence Service asked the game’s UK manufacturer - John Waddington Ltd - for help with a bold plan. Fake charities distributed a new version of Monopoly via the Red Cross to prisoners of war held by Nazis. Unlike the usual sets, these boxes included genuine maps, compasses, real money and a file to help the prisoners to escape, apparently with a good deal of success!

So, while Lizzie Magie's The Landlord's Game might not have saved the economy, it did end up, in a round about kind of way, saving lives. Well done, Lizzie!