The Science of Movement: Eadweard Muybridge

British photographer Eadweard Muybridge was born on April 9th 1830 in Kingston upon Thames, later emigrating the United States in the 1850s. 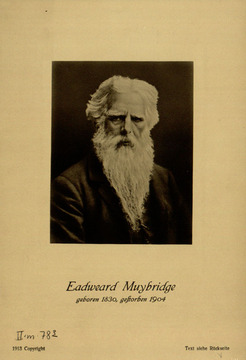 Muybridge is renowned for his ground-breaking work in animal locomotion, proving a horse does in fact fly when galloping. He was one of the first photographers to use multiple cameras to capture motion, then projecting the findings with his creation of the zoopraxiscope - a device for projecting motion pictures that pre-dated the flexible perforated film strip.

Muybridge’s most famous production experiment, which took place on June 19th, 1878. It was this experiment that laid the foundations for the future development of motion pictures, consisting of 24 photographs in a fast-motion series. Muybridge was commissioned by former Governor of California, Leland Stanford, a businessman and race-horse owner, who had taken a position on a popularly-debated question of the day: whether all four of a horse's hooves are off the ground at the same time during the trot, which was successfully proven by Muybridge’s experiment. As a result of the commission, Stanford published a book The Horse in Motion, but gave no credit to Muybridge despite containing his photos and his research, possibly because Muybridge lacked an established reputation in the scientific community.

Between 1883 and 1886 Muybridge took over 100,000 images at the Unversity of Pennsylvania, resulting in over 700 sequences, studying the movement of humans and animals. Many of these works can be found in Europeana, featuring models either entirely nude or with very little clothing, photographed in a variety of undertakings, ranging from boxing, to walking down stairs, to throwing water over one another and carrying buckets of water.

Today his findings and fundamentals are still used, with similar setups of carefully timed multiple cameras are used in modern special effects photography with the opposite goal: capturing changing camera angles with little or no movement of the subject. Muybridges’s work is also a major reference for technical artists and figurative drawing.