Published May 23, 2017 by
Europeana Foundation (opens in new window)

One of the Art Nouveau highlights of the 1900 World’s Fair in Paris were the architectural ceramics of French manufacturer Alexandre Bigot. Housed in a pavilion designed by Jules Lavirotte, and awarded a Grand Prix, the remarkable ensemble was bought at the Fair by the Museum of Applied Arts in Budapest. In the second of two guest posts, Gabriella Balla, Curator of Glass and Ceramics, tells the story of the 1900 World’s Fair pavilion and its subsequent journey to Budapest.

The Bigot Pavilion at the 1900 World’s Fair and its journey to Budapest Photographs of the 1900 Exposition Universelle (World’s Fair) pavilion, designed by architect Jules Lavirotte (1864-1924), show that it was comprised of many types of decorative architectural stoneware: a columned portico surmounted by an elaborate cornice; a life-size window facade for a house, complete with columns supporting a balustrade; lintels, floor and wall tiles, and a staircase railing. 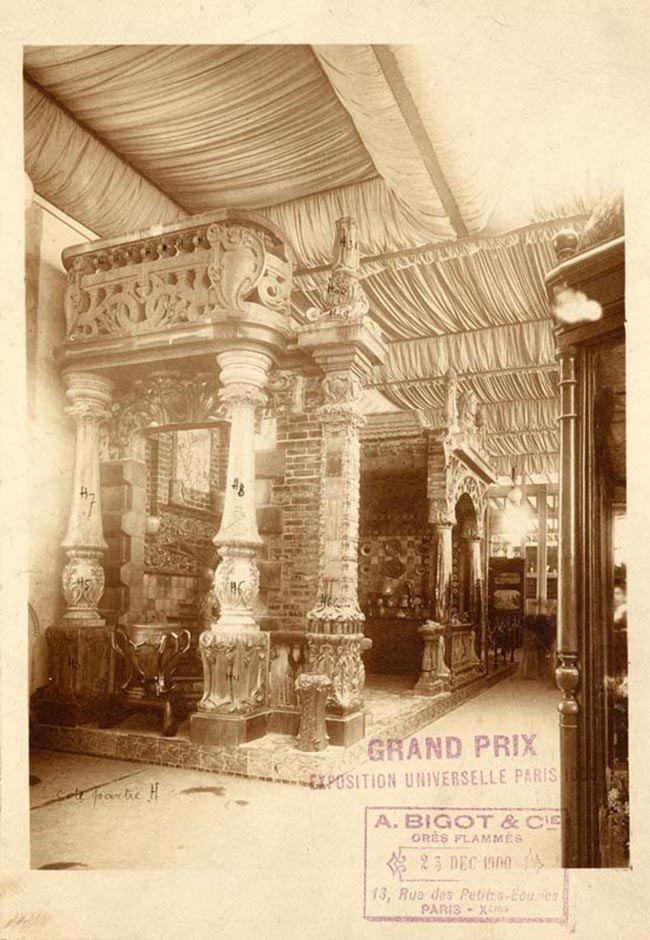 The Bigot Pavilion at the 1900 World’s Fair, Paris. Museum of Applied Arts, Budapest. In copyright. 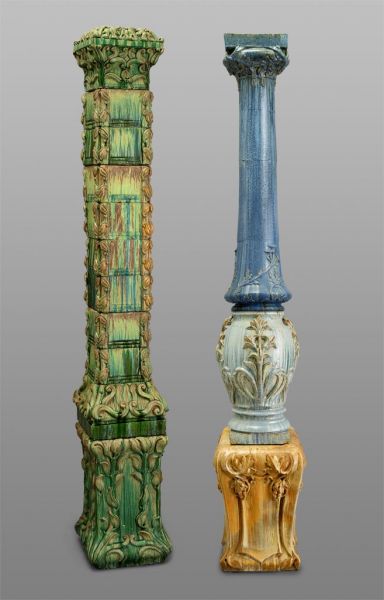 Pillar and column elements from the Bigot Pavilion, 1900. Manufactured by Bigot & Cie, Paris. Museum of Applied Arts, Budapest. In copyright.

Most of the architectural elements used in the pavilion assembled for the Fair were designed for two buildings by Lavirotte (which are still standing in the seventh district of Paris). The entrance gate to the Fair was also decorated with a decorative frieze by Bigot, elements of which were also reproduced for the pavilion.

At the Fair itself, the Museum of Applied Arts acquired an outstanding collection of objects (primarily works of French Art Nouveau) selected by its Director Jenő Radisics. The most expensive purchase was Bigot and Lavirotte’s pavilion. The production cost alone of its elements was estimated to be 20,000 francs. After bargaining, the purchase price was reduced to 5000 francs. The representative of the museum in France, Louis Delamarre-Didot, was instrumental in arranging the purchase.

As the building of the Museum of Applied Arts, completed in 1896, is a prime example for the use of architectural ceramics in Hungary, it is natural that Bigot’s technical innovations drew Radisics’s interest.

The total weight of the Bigot pavilion was 12,680 kilograms, therefore its transportation required considerable organisation. The pavilion elements were dismantled in November 1900 and the ensemble was sent to Budapest by train on 13 December 1901. Two days later, Radisics informed the Bigot company in writing that all the ceramics had arrived intact.

The purchase of the Bigot Pavilion in its entirety was perhaps the greatest feat of Jenő Radisics’s long tenure as Director of the museum.

From the time of its purchase until recently, only discrete elements of the Bigot acquisition had ever been displayed in Budapest. This changed in 2013 when the acquisition was exhibited in its entirety at an exhibition dedicated to Bigot.

Further examples of Bigot’s architectural ceramics can be seen online in the collections database of the Museum of Applied Arts, as well as in Europeana. 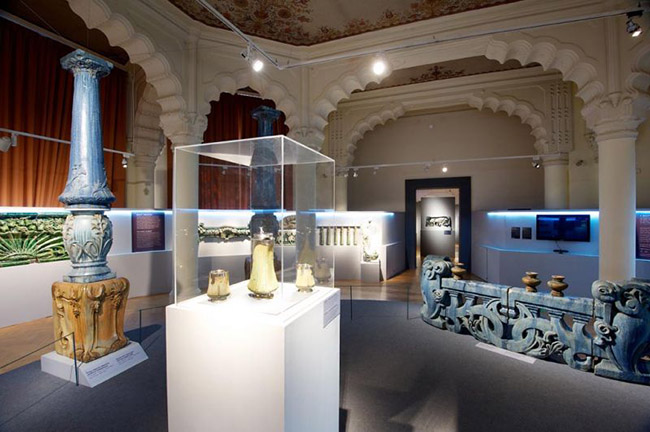 If you enjoyed this post, why not check out our Art Nouveau exhibition?