Production on a grand scale

You might remember the sight of an old steel and wood bench with a sewing machine affixed to it in the house of your parents, grandparents, or somewhere forgotten, collecting dust. Singer sewing machines and their logos and fonts are embedded in the collective mind of many, but how did it end up there in the first place?

The tale of the Singer company and their world-changing sewing machines is one of industrialisation, emancipation, mass production, mass marketing, and a massive impact on the world.

The story of Singer starts around 1850, when Isaac Merritt Singer, an American businessman, came up with an idea for improving the current lockstitch design that sewing machines had. He proposed the design for a sewing machine with a shuttle with a straight needle instead of a curved one, that went straight up and down instead of in a circle like previous sewing machines did.

This made the operation of a sewing machine much more reliable, and Singer filed a patent for this new design in 1851.

Singer's sewing machines really took off when they were awarded the first prize at the Paris World Fair in 1855. Singer became the largest selling brand of sewing machines internationally in that year. Singer put a lot of effort into pushing down the cost of producing their sewing machines. The prices of Singer sewing machines were pushed down to 10 dollars in the 1870s (about the equivalent of 280$ in 2018) so they would be affordable to a large group of people. 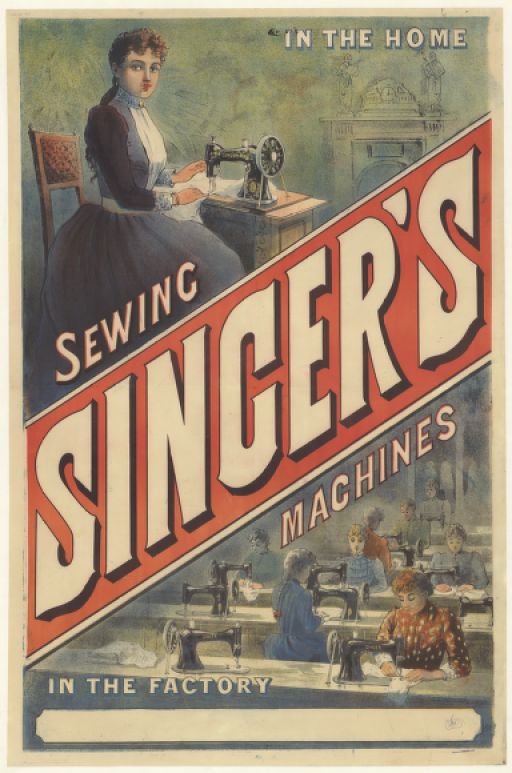 Singer marketed to families by focusing on the image of the virtuous domestic wife repairing and sewing clothes in no time for husband and children alike.

In 1870 they debuted the red "S" logo with a sewing woman in the background, staying in use until at least 1920.

Singer invested heavily in teaching women how to use sewing machines in the home, organising Singer tutorial workshops for women and girls all over the world.

The machines were continuously redesigned to be quicker, easier to use, and lighter. New inventions, like the vibrating shuttle invention of 1885, allowed the Singer Corporation to create their own patents and start mass production.

Lower prices and higher availability of Singer sewing machines meant that the prices of clothing went down drastically, impacting workers relying on sewing for their livelihood.

EXPLORE: Listen to the sound of a Singer sewing machine

At the same time it had emancipating effects, giving women more time for other activities outside the household and enjoy leisure activities or seek employment.

Industrialisation and mass production also brought massive negative consequences, like the proliferation of exploited and oppressed workers in sweatshops, issues that persist to this day.

Singer sewing machines changed the working lives of many in myriad different ways. The stories of seamstresses, sweatshop workers, housewives, and many more are intricately intertwined with the machinery they used in their labour. By looking back at the history of the Singer sewing machine, those stories are surfaced as well.

Did you or your family work with Singer sewing machines or in the clothes production industry? Share your story and help us tell the story of Europe through our working lives in the past and the present.