Scandal in Warsaw: Podkowiński’s Frenzy and the birth of Young Poland

In this guest post for Europeana's Art Nouveau season, Dr. Piotr Kopszak, Curator at the National Museum of Warsaw, tells us about the artist Władysław Podkowiński and the scandal surrounding his painting Szał (Frenzy).

Stylistic change has always fascinated art historians and it is often difficult to pinpoint the precise moment when change occurs.

However, this is not the case with the birth of Art Nouveau in Poland, known as modernizm or Młoda Polska ‘Young Poland’. The eruption of Young Poland took place when a painting entitled Szał (Frenzy) by the Warsaw artist Władysław Podkowiński was exhibited in the city’s Zachęta gallery on 18 March 1894.

_Frenzy_’s monumental composition depicts a naked woman seating on an agitated black horse, clinging onto its neck as the animal bares its teeth and flares its nostrils. Her eyes are shut and her abundant hair blends with the horse's mane.

The painting’s display was met with an atmosphere of scandal and sensation, lending it public notoriety. On the first day of the exhibition, a thousand people saw it; in the first month, twelve thousand. The painting itself was a scandal but the artist himself decided to end its exhibition with one more.

On the morning of 23 April 1894, Podkowiński entered the Zachęta gallery, asked for a ladder and, in front of stunned gallery visitors, slashed the painting with a knife.

Later accounts differ in their portrayal of Podkowiński‘s mood: some say that he was entirely calm, whilst others say he was "possessed by a demon of destruction".

This dramatic event took place less than a year before the artist’s death at the age of just 28. In addition to its lurid subject matter, contemporary gossip whispered that Frenzy that it referred to Podkowiński's romance with one of Warsaw’s aristocratic ladies, despite a firm denial from the parties concerned.

_Frenzy_’s exhibition developed into a media event, particularly after Podkowiński gave interviews to the press describing his emotions when he slashed the the painting. One might speculate that this sequence of events had in fact been set up deliberately. The idea of artistic scandal would surely not have been unfamiliar to Podkowiński, whose earlier work such as Ladies at Billiards and The Dance of Skeletons had flirted with controversial subjects. 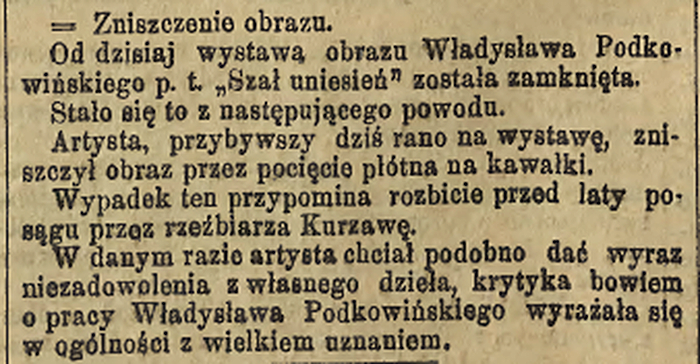 Contemporary coverage in the Warsaw Courier, 1894. University of Warsaw Library.

The scandal surrounding Frenzy obscured important aspects of the painting, such as its link to iconographic tradition going back to the Middle Ages. Unusual as it was, Frenzy was not without parallels elsewhere in the arts. Its proto-expressionist character was very much in tune with contemporary developments in Polish literature and poetry.

A group of Polish writers later called ‘Without Doctrine’, in reference to Henryk Sienkiewicz’s book Without Dogma, began, in tune with rising interest in neurosis in America and Europe, to explore the domain of unbalanced emotional life. A fascination with neurotic states is visible in many other works and themes of decadence were emerging in the work of Polish poets such as Lange, Przesmycki, Kasprowicz and others. A Warsaw art critic, discussing Podkowiński’s earlier Impressionist works, called Impressionism "decadent colourism", thereby making a connection to literature.

It’s no wonder that the exhibition of Frenzy became such a turning point in Polish art.