If someone is asked today, which operas of Antonio Salieri he or she knows, most of them will not come up with an answer, which is not surprising. The operas of Salieri had already started vanishing from stage even before the composer’s death in 1825 and are hardly shown today. Nevertheless, during his lifetime Salieri was a very prolific composer of opera. He wrote around 40 operas and 36 of them were performed during his lifetime. He was known for them all through Europe and they were beside Vienna also quite successful in London, Prague, Warsaw, Lisbon, Milan and Paris.

Although there has been quite a lot of research in the last decades concerning Salieri, most people know him as Mozart’s opponent or even murderer. This cliché was also strengthened by the release of the famous film “Amadeus” in 1984. No doubt - Salieri and Mozart were musical rivals. An occurrence which probably inspired them both unto a certain degree. But whether they really tried to harm each other’s career is simply unknown. 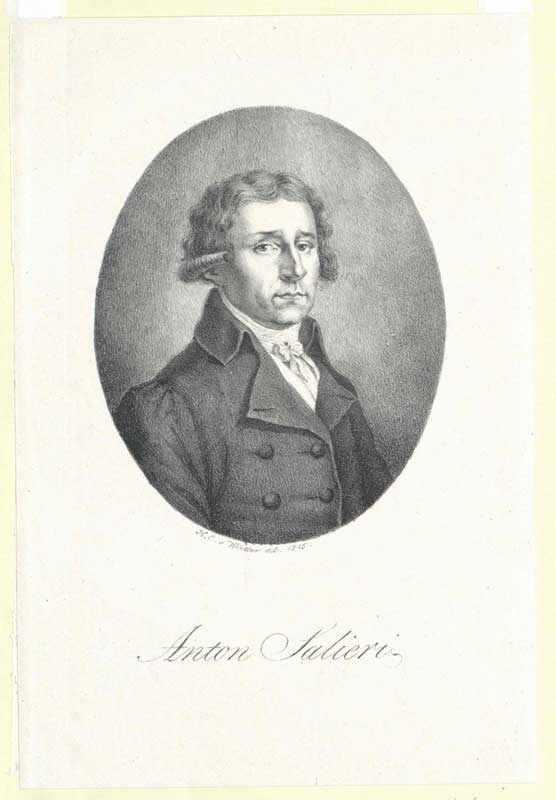 Antonio Salieri was born in Legnago in 1750. He was taken to Vienna as the protégé of Florian Leopold Gassmann, who met him in Venice in 1766 and who immediately recognized his musical talent. In Vienna Salieri received a thorough musical education and made the acquaintance of very important people such as Emperor Joseph II, the librettist Pietro Metastasio, the composer Christoph Willibald Gluck and many more, who positively influenced his career.

Throughout his life Salieri always stayed strongly connected with Vienna, personally and professionally. His wife was Viennese and Salieri was made Hofkapellmeister (director of music for the court) in 1788, a post he held for 36 years until his retirement in 1824. Concerning his operas Salieri preferred to work with new texts, meaning a lot of the librettos he used had never before been set to music. He furthermore had the habit of revising all of his operas even after they had been performed or known for several years. He never considered them finished but more as “_work in progress_”, because time, taste, setting and his own musical development might have changed.

His best known and most played works were the ones he edited the most. The first of Salieri’s operas ever to appear on stage was the opera buffa “Le donne letterate” in 1770, based on a libretto by Boccherini, which was originally intended for Leopold Gassmann. Salieri’s opera represents the style of Viennese Operas during this time, but also already gives a glimpse towards the direction in which Salieri’s operas would develop. He wrote several more opere buffe before turning his attention in 1771 with “Armida” to more serious matters. 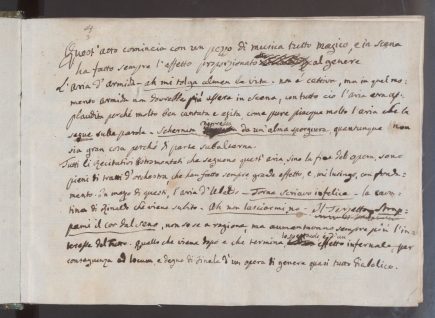 The beginning of the first scene of the first act of Armida by Antonio Salieri (Mus.Hs. 16517/1-2 Mus), Libretto by Marco Coltellini, Österreichische Nationalbibliothek, Public Domain.

A couple of years later in 1774, when he was 24 years old, he was appointed, in succession of Gassmann, to the post of Kammermusikkomponist (composer of chamber music) and was also made music director of the Italian opera. Shortly afterwards the focus in Vienna switched from opera to spoken theatre and from Italian to German. Salieri therefore dedicated his time to writing mostly comical operas for theatres in Italy. The most successful one was “La scuola de’ gelosi”´ 1779, which made him known throughout Europe. 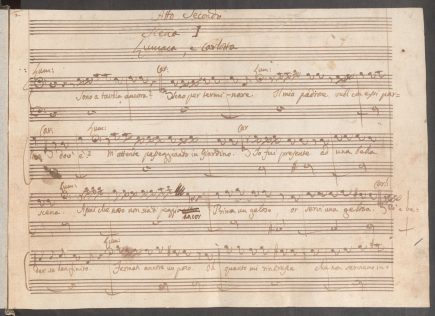 Salieri only wrote two German operas (or “Singspiel”). One of them was “_Der Rauchfangkehrer_” in 1781 on behalf of Joseph II and the other one was his very last opera “_Die Neger_” (sic!), which he wrote 24 years later in 1804. The “German Era” did not last very long though and Italian comic opera was back on stage in 1783. 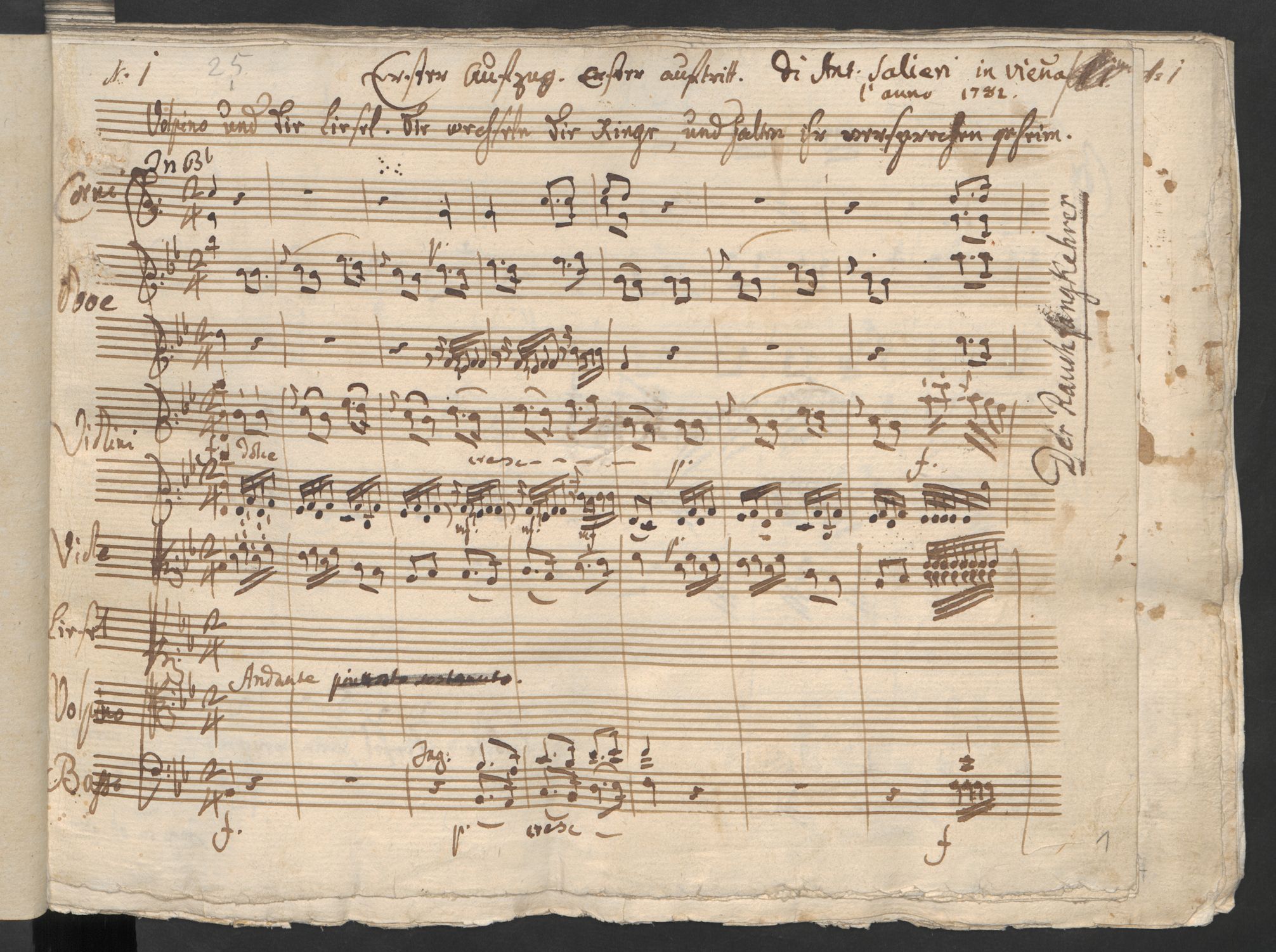 The beginning of the first scene of the first act of "Der Rauchfangkehrer" by Antonio Salieri (Mus.Hs.1611 Mus), Libretto by Leopold Auenbrugger, Österreichische Nationalbibliothek, Public Domain.

From 1782 onwards Salieri wrote several French operas to be performed in Paris, which was only stopped by the French revolution. Nevertheless, for a time being he replaced the late Christoph Willibald Gluck as operatic authority in Paris. His first French opera was “Les Danaides_” in 1884 which was so successful, that he was commissioned immediately to write two more operas. His biggest success was “_Tartare_” in 1786 on a libretto by Pierre Augustin Caron de Beaumarchais, which even appeared in an Italian version in Vienna in 1788. There it was called “_Axur re d’Ormus”. The libretto was written by Lorenzo da Ponte and slightly modified. Between 1788 and 1805 the opera was staged 100 times in the Viennese court theatres.

After his appointment to Hofkapellmeister in 1788, Salieri was more involved in administrative tasks and started also devoting himself more to the composition of church music. Between 1790 and 1804 he wrote 9 more operas which were actually performed during his lifetime. The premiere of his last Opera “_Die Neger_” (sic!) was performed on the 10th of November 1804 and the piece was not well received. Of those last nine operas “_Palmira regina di Persia_” was by far the most successful. 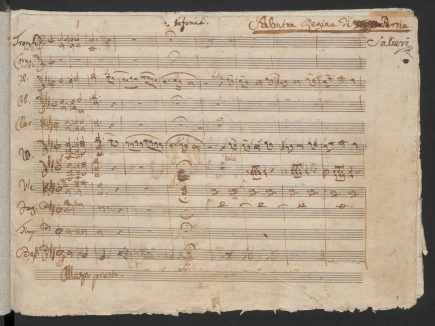 After 1804 Salieri did not write any more operas. As an old man – probably in 1822 – reflecting on his life he made a lot of annotations in his autographs and finished some of his works. John Rice put it in his book like that “_Often written with a shaky hand, these didactic and often superficial remarks show an old-artistic teacher looking back proudly, but also self-critically, at his life’s work_”. (Rice, 1998, 7) Salieri always took great care of his musical scores throughout his life and the Austrian National Library has one of the most extensive collections of operatic autographs from the 18th century. This collection is now also accessible through Europeana and therefore through the Music Collection. 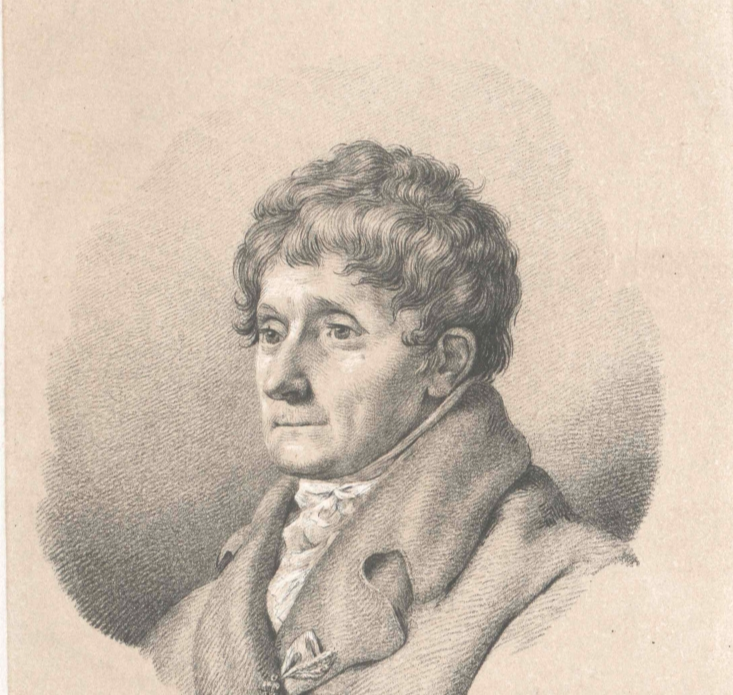 Reference: All the information mentioned in this blog post is derived from: John Rice, Antonio Salieri and Viennese opera, Chicago 1998.