Learn more about the amazing life and work of Florence Nightingale's and where to take part in the bicentenary celebrations of her birthday - #nightingale2020.

Known as 'the lady of the lamp', Florence Nightingale is celebrated for as a founder of modern nursing, using statistics and data visualisation to improve the field of medicine, and being a strong and empathic woman fighting for social reform.

2020 marks the bicentennial celebration of Nightingale's birth with activities, conferences and exhibitions throughout the year. This blog highlights some of the striking objects in Europeana related to Florence Nightingale's life and work, and gives you more information on where to take part in the #Nightingale2020 celebrations.

Nightingale was born into an upper-class Victorian British family. She enjoyed a privileged upbringing, influenced by the extensive social sphere of her family that led to her adopting a liberal-humanitarian and feminist world view. She travelled extensively throughout Europe and North Africa during her youth. 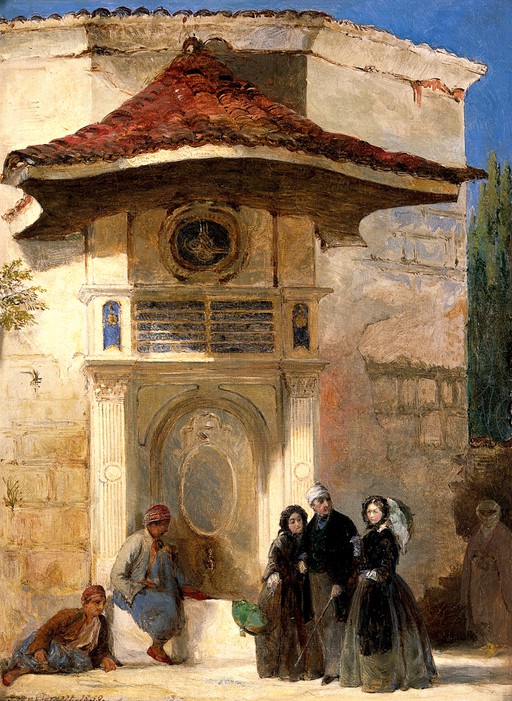 Even though her family was opposed to her drive to educate herself and become a nurse, Nightingale went her own way by continuing her travels, becoming a political advisor and receiving medical training in Germany.

She is perhaps best known for her role in the aid of the wounded and sick in the Crimean War.

In 1854, Nightingale left for Crimea together with other volunteer nurses and medical staff. Florence arrived at a military barracks in Scutari, where she found patients in horrible conditions caused by lack of resources and hygiene. There, she began to implement measures to improve the hygiene in the barracks and reduce mass infections.

Nightingale wrote to The Times in England to ask for financial aid in the improvement of conditions for patients, and called on the Sanitary Commission to provide sewage systems and other improvements to sanitation.

Florence Nightingale's work in the Crimean War received extensive coverage in the British press, which aided her efforts and made her a well-known figure. An article in The Times described her in passing as 'the lady with the lamp', referring to how she made the rounds at night holding an oil lamp to check on the sick and wounded. 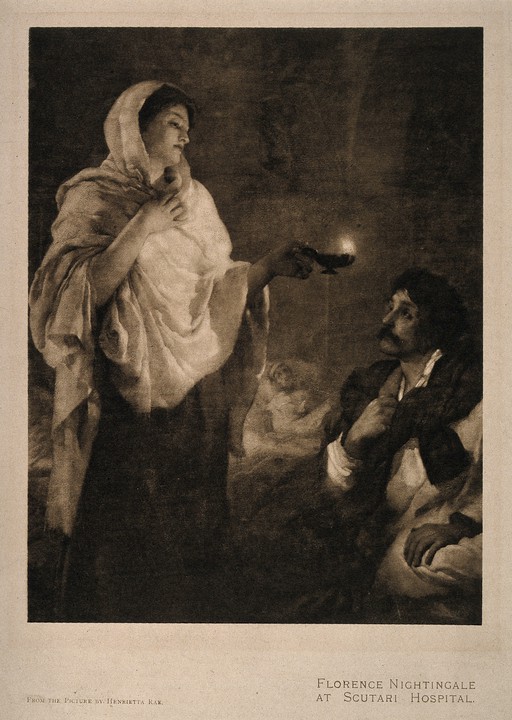 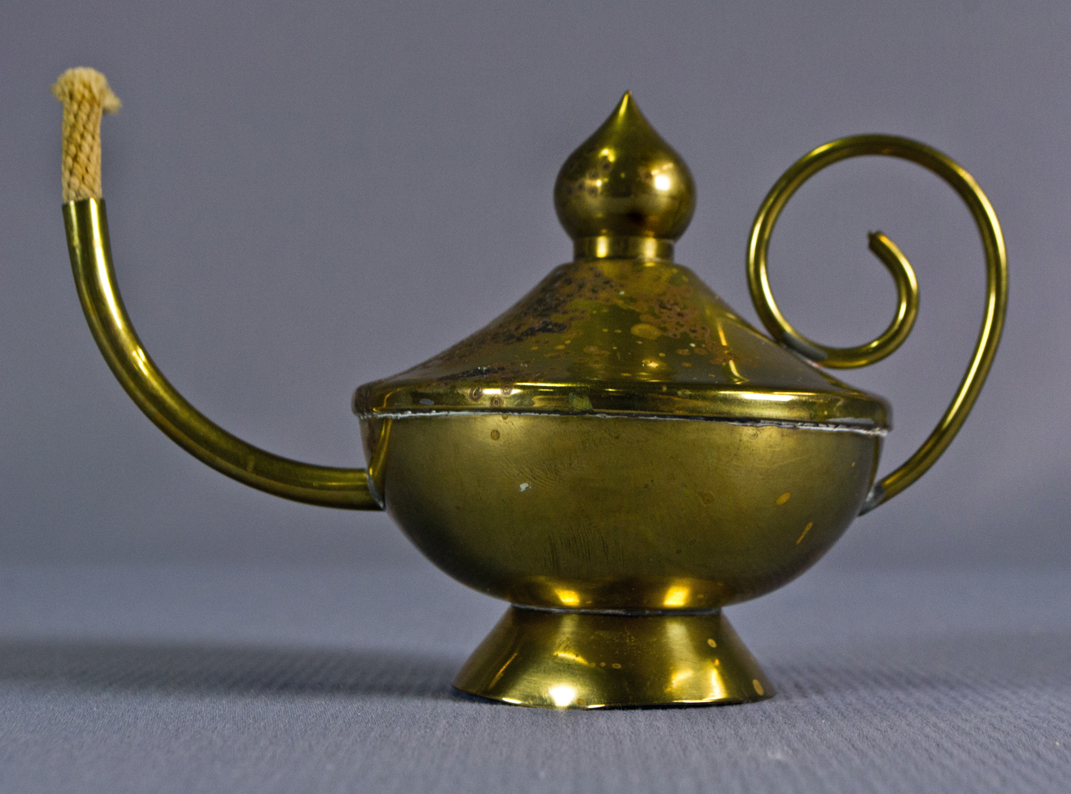 For her work and dedication during the Crimean War, Florence Nightingale received a brooch from Queen Victoria, referred to as the 'Florence Nightingale Jewel'. Nightingale and Queen Victoria maintained written correspondence during the Crimean War, convincing the Queen to reform the military hospital system in 1857. After her work in Scutari, she continued fighting for hospital reform and social justice back in the United Kingdom. 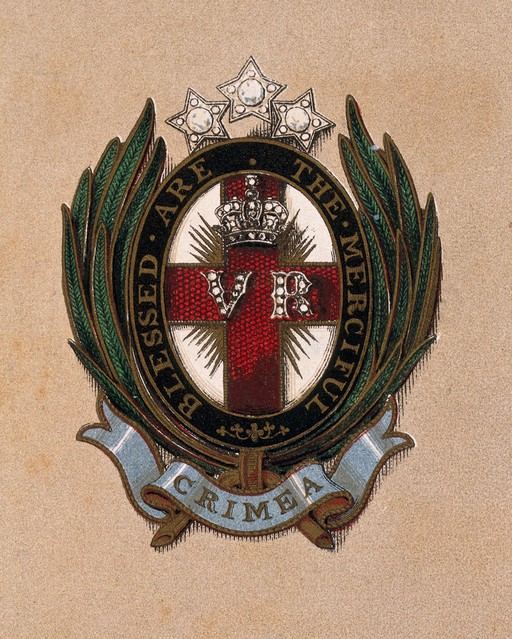 Jewel decorated with a red cross and three stars given by Queen Victoria to Florence Nightingale for her work in Crimea. Lithograph, 14 February 1856. Wellcome Collection, United Kingdom, CC BY.

In 1855, a  fund was established to found the Nightingale Training School at St. Thomas' Hospital in London - the first school for nursing to be founded worldwide. Nurses that trained there went on to start their own schools for nursing around the United Kingdom and Europe. 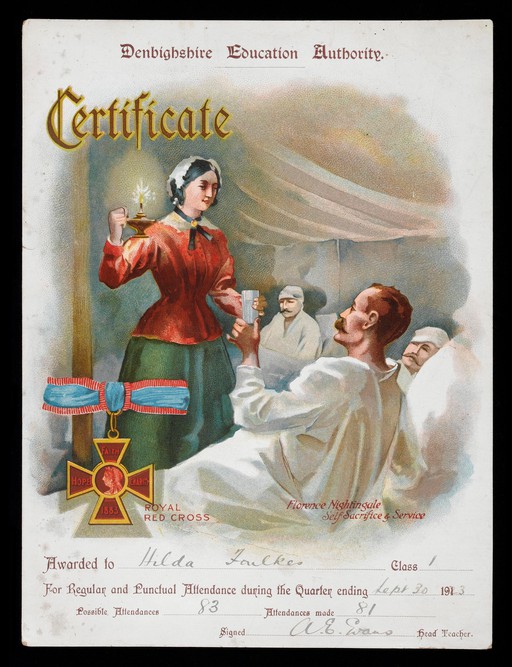 Certificate of attendance given to Hilda Foulkes for attending 81 out of 83 classes during the quarter ending September 30th 1923. Wellcome Collection, United Kingdom, CC BY. 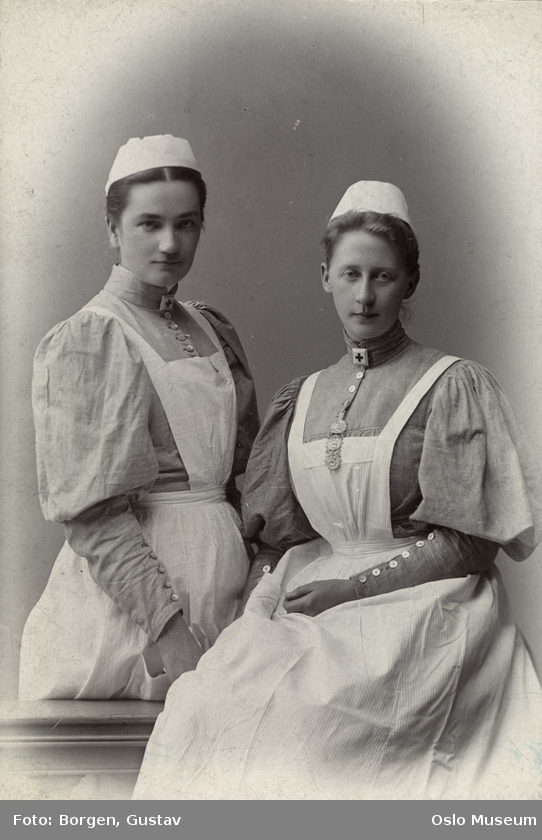 Florence Nightingale wrote several books and treatises on nursing and medical science. Her most influential writing - 'Notes on Nursing' - is a practical guide to ensure hygiene and health and safety standards in hospitals and by nursing staff. It is often seen as the foundation of the modern nursing profession. 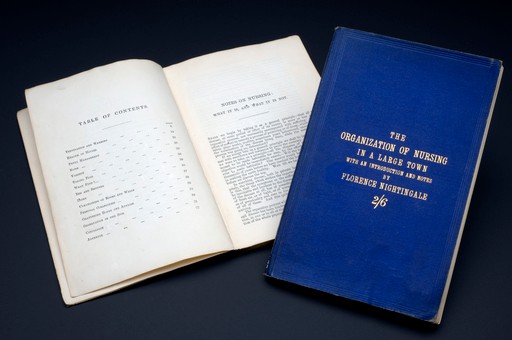 Throughout her life, Nightingale wrote about 200 books, pamphlets and articles. From 1857 onwards, she became increasingly bed-bound, but was still extremely productive in her writing efforts, furthering the fields of medical care and increasingly focusing on social reform and feminism. Most of Nightingale's written work was created in her house in Embley Park. 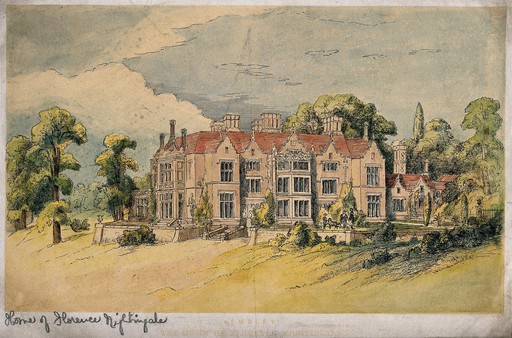 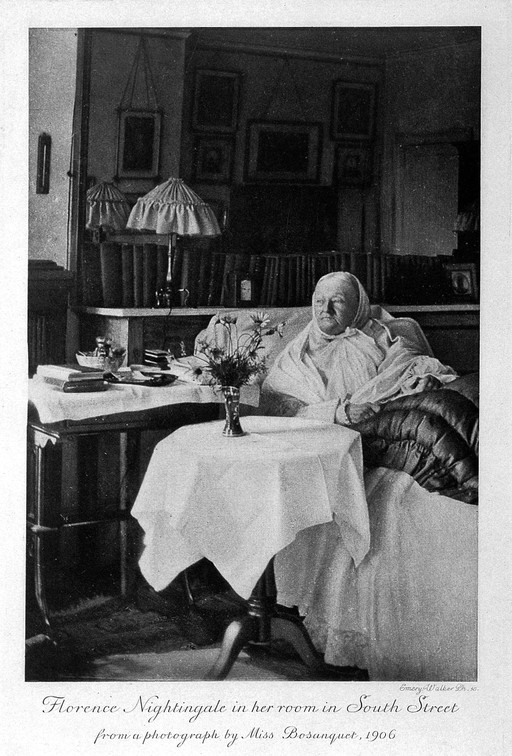 Championed as the founder of modern nursing, at the forefront of the fight for free universal access to healthcare, and an inspiration to the women's right's movement, today several hospitals are named after Nightingale and multiple statues have been erected in her honour. Her likeness and legacy has appeared on coins, banknotes and postage stamps. 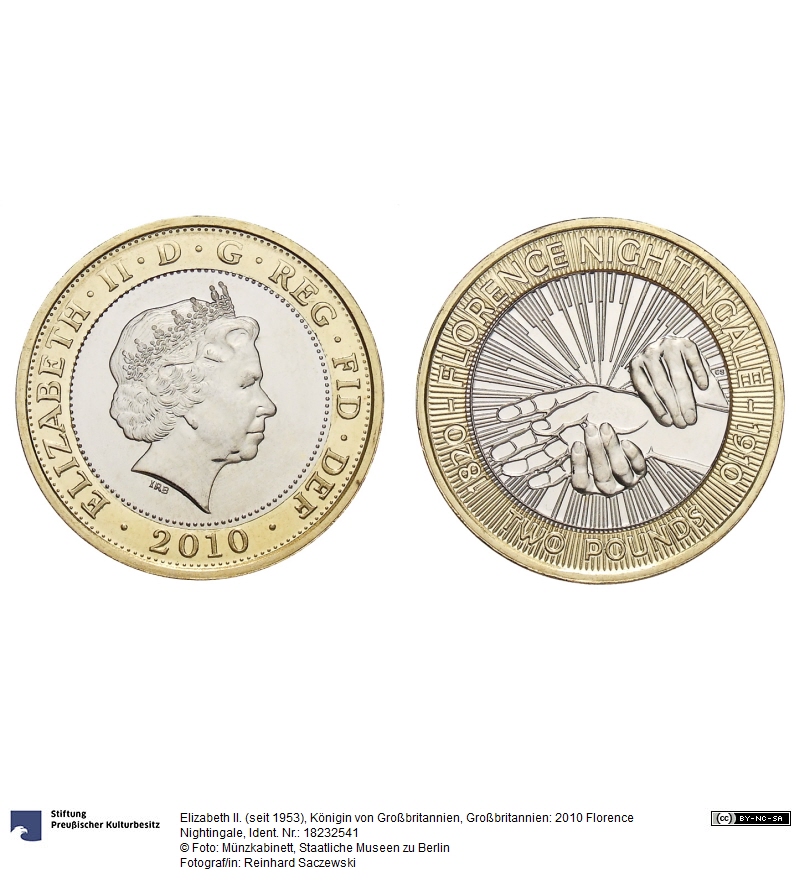 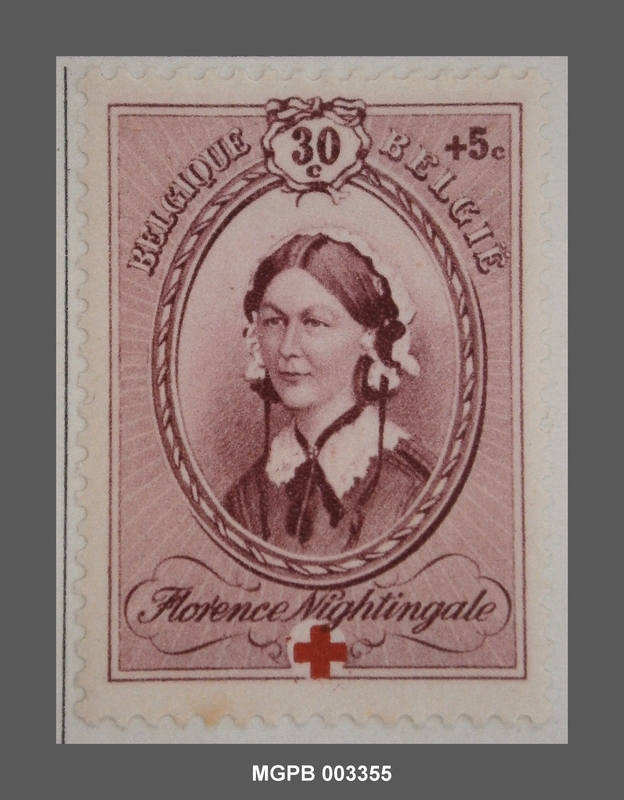 Since 1965, International Nurses day has been celebrated annually on Florence Nightingale's birthday, 12 May. Several theatre plays, books, documentaries, TV series and films have been created about her work and life. 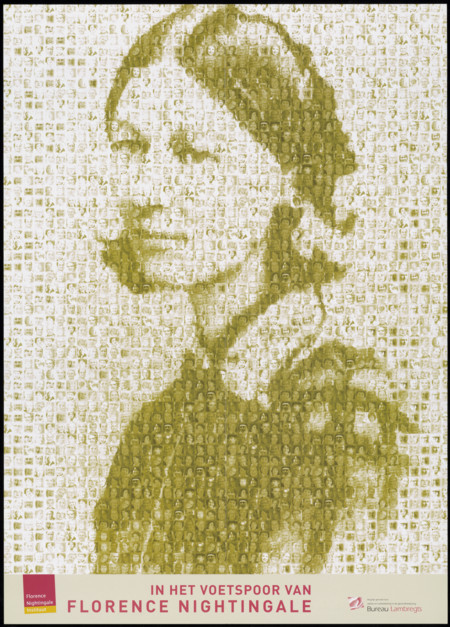 2020 has been declared by the WHO as the year of the Nurse and Midwife, 200 years after Nightingale's birth. Throughout the year you'll be able to visit museum exhibitions, attend conferences, do guided walks and tours, and participate in other remembrance activities surrounding Florence Nightingale's bicentenary celebrations.