From the Enlightenment to the dawn of Romanticism

Writer, republican, literary theoretician and philosopher, Madame de Staël contributed to the diffusion of ideas in Europe through her travels and her Salon, where she received many European intellectuals. 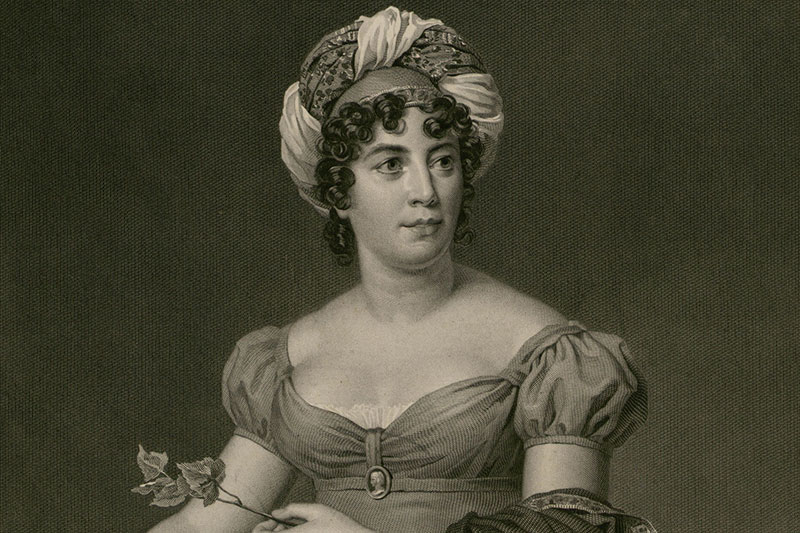 A Woman of Letters and a Philosopher

Anne-Louise Germaine Necker was born into the Swiss bourgeoisie in 1766 and received an education steeped in the spirit of the Enlightenment. From her childhood, she rubbed shoulders with politicians, talked with the Encyclopaedists and developed an enthusiasm for Rousseau's ideas.

After her marriage to Baron Staël von Holstein, Germaine de Staël opened a Salon where new ideas, brought by participants in the American Revolutionary War, could circulate.
She developed a passion for writing at an early age and some of her first compositions survive in 'La Correspondance littéraire'. Published in 1788, Madame de Staël's 'Lettres sur le caractère et les ouvrages de Jean-Jacques Rousseau' marked her first literary success.

Towards an Enlightened Republic

At the start of the French Revolution, Germaine de Staël was in favour of what she felt was progress and a step towards a constitutional monarchy. But after the fall of the monarchy, she left France and took refuge at Coppet in Switzerland and later in England. During this period she wrote many novels, plays and essays.

After her return to Paris in May 1795, Madame de Staël reopened her Salon and spoke in favour of a moderate and rational Republic with roots in the Enlightenment. In 1800, she presented a new view of literature in 'De la littérature considérée dans ses rapports avec les institutions sociales'.

Between 1795 and 1802, Germaine de Staël watched the rise of Napoleon Bonaparte. Once she realised he wouldn’t promote the ideals of the Revolution, she fought him on the ideological level. Napoleon exiled her after she wrote 'Delphine' (1802). Unable to publish, she travelled throughout Europe and received many people who were opposed to Napoleon at Coppet, including:

Coppet was a new sort of gathering place, in transition from the Salons of the Enlightenment to the Cénacle of the Romantic movement. It was a place to exchange opinions and ideas, and drew intellectuals across three generations, of different nationalities, religious views and political opinions. United by the values of liberty, the individual and his rights, respect for others, and equality before the law, they all spread their ideas through their writings and their travels across Europe.

'Corinne, ou l'Italie', written during Germaine de Staël's exile, shows her ideas on aesthetics, the arts and literature. 'De l'Allemagne' was an important essay in developing the Romantic doctrine, and was published clandestinely in London in 1813, after its censure in 1810.

Germaine de Staël returned to France after the fall of Napoleon and was at the pinnacle of her glory during the First Restoration (1814-1815). She died in Paris on 14 July 1817, the anniversary of the storming of the Bastille prison and the beginning of the French Revolution.

Or check out the chapter about Madame de Staël in Europeana's online exhibition Pioneers : Trailblazing women in the arts, sciences and society