Looking for Europe through fashion plates

How fashion has shaped European identities

For the #SalonEuropa blog parade, the curatorial team at European Fashion Heritage Association looks at how fashion plates have created and imagined European national identities. Fashion objects can tell us many stories - the social histories of their origin and use, how we portray our identities through clothing, how we form communities around fashion and how clothes play a role in our relationships with our bodies.

European archives preserve a large number of objects with diverse origins, both from within Europe and beyond. Fashion objects such as these can illustrate how national identities are  formed. This blog will look at fashion plates. Fashion plates are pictures - usually illustrations - typically published in magazines at least from the 18th century onwards, illustrating fashionable styles in clothes and accessories. Very often they were used to describe fashion of a specific place or nation - for example, Paris, London, or more generally French fashion, and were the most common method to disseminate information about new fashions. So, plates travelled and were mainly used as a way of showing fashions across the borders of different nations. Some nations’ fashion was valued over other’s; desire was created for some things over others. Describing national trends, these plates also reflected on the differences between nations through the ‘look' of their populations. 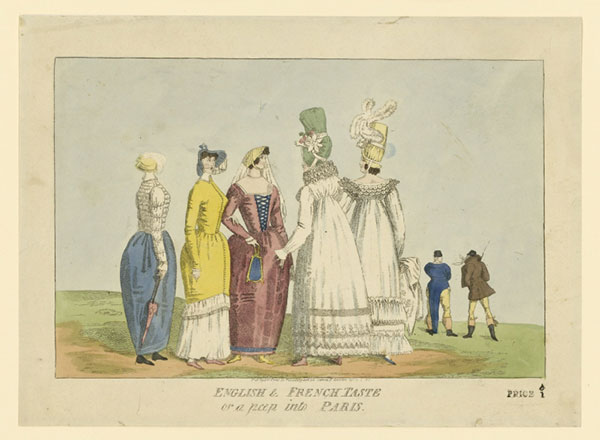 Samuel William Fores, English and French Taste or a peep into Paris, 1818. Courtesy Kunstbibliothek, Staatliche Museen zu Berlin, CC BY NC SA These images tell many stories: they are informative and funny at the same time, and can be used to understand social groups through the ways that national design traditions and clothing practices are described. 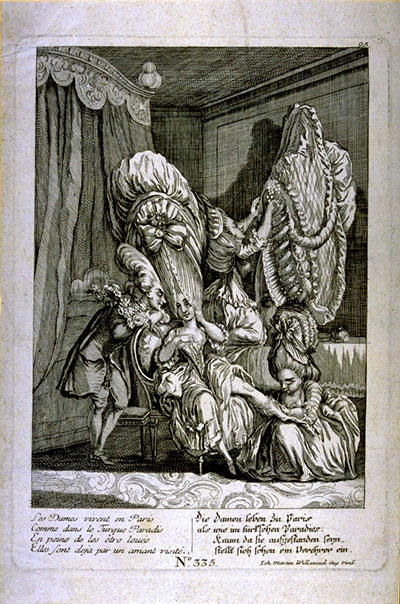 Johann Martin Will, Modethorheit: Les Dames vivent en Paris, 1775-1776. Courtesy Kunstbibliothek, Staatliche Museen zu Berlin, CC BY NC SA The differences in style depicted by fashion plates was also exaggerated in satirical prints and caricatures, which were published in popular magazines and newspapers. These prints used fashion as main indicator of the similarities and dissimilarities between peoples and nations, focusing on what was considered ’strange’ and not immediately understandable to construct national stereotypes. The images selected to illustrate this post show an array of different illustrations, both fashion plates and satirical prints, that show how fashion was indeed considered a clear language to demonstrate the difference in tastes and customs of, say, English and French people: this is particularly clear in the caricatures by Samuel William Fores and William Heath. Other artists looked out from the spaces that were considered the centres of fashion and depicted other peoples, such as François Nicolas Martinet who illustrated Russian Costumes in 1814. 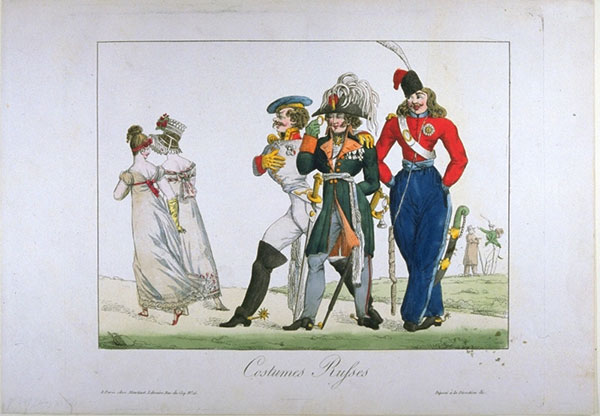 François Nicolas Martinet, Russian Costumes, 1814. Courtesy Kunstbibliothek, Staatliche Museen zu Berlin, CC BY NC SA All in all, apart from the differences in style, these images are able to relate to their historical time and signal alliances and oppositions that are mirrored in the political and social scene of the Europe asset of the time they belong to - and are therefore a fundamental material to look at to better understand our common past. Explore more fashion plates on Europeana Fashion.