The life and work of the Polish filmmaker

‘It is the road that’s really interesting,’ said Krzysztof Kieślowski at his last public event before his death. ‘I think that’s just the way we are. We know where the goal is and reaching it is not really as interesting as the path. That’s very curious. I think it’s the same with films, just like with anything else…’ 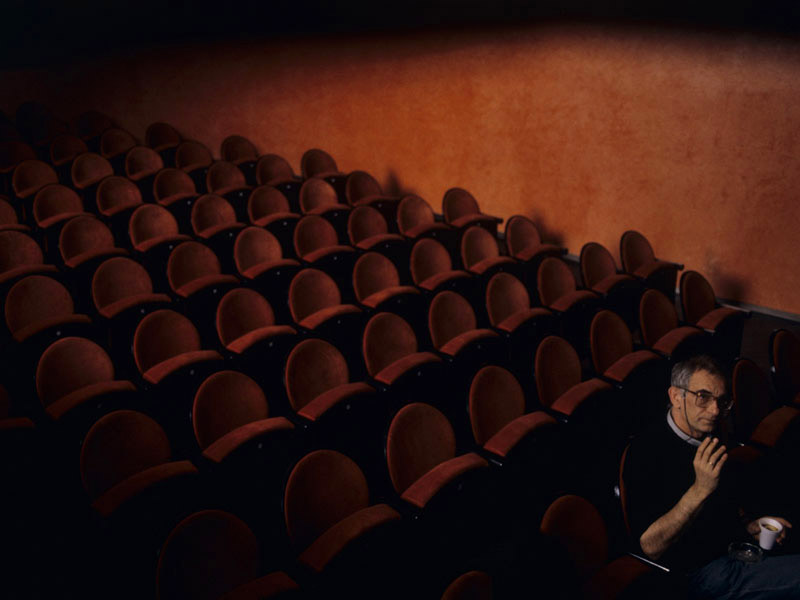 Krzysztof Kieślowski's life began in the turbulent times of World War II. He was born in German-occupied Warsaw on the 27 June in 1941. Soon afterwards, his parents left for what was then the eastern borderlands of Poland (Ukraine today).

The Kieślowski’s migration continued after the war: moving from town to town in southern Poland, as Kieślowski’s father was being treated for tuberculosis.

In 1957, he moved to Warsaw to study in State Technical Theatre Educational High School. In 1964 Krzysztof Kieślowski was accepted by the Leon Schiller National Film, Television and Theatre School in Łódź where he studied at the film directing department.

Like most Poles during the Communist times, Kieślowski was not able to travel abroad for many years, but, as a filmmaker, he was able to travel around Poland researching his documentary films.

Kieślowski and other directors from the Documentary Film Studio in Warsaw made short films - with titles like Fabryka (Factory), Szpital (Hospital) and Dworzec (Station) - about communities and workplaces, depicting the Poland of the 1960s, 1970s and 1980s. Each film was about a particular group of people, but, at the same time, offered a more generalized image of Poland.

Although Kieślowski was restricted in his work by censorship from the Communist state, he aimed at describing the true Poland in his documentaries. His short factual films are like poems that operate with metaphors and allusions to give the true depiction of reality.

In 1981 Kieślowski’s two films: Przypadek (Blind Chance, 1981) and Krótki dzień pracy (Short Working Day, 1981), show the clash between the communist power and underground opposition in a more open manner, and were banned by censorship. Both films present Poland when Solidarity movement is being born, with one showing archival shots of Lech Wałęsa during the famous strikes in Gdańsk shipyard in August 1980.

1985’s film Bez końca (No End) was a turning point of Kieślowski’s film career. The script was written by Kieślowski and Krzysztof Piesiewicz, a lawyer and later politician This was their first writing collaboration, which was to continue for all of Kieślowski's subsequent films.

Similarly, Zbigniew Preisner provided the musical score for this and most of Kieślowski's subsequent films. Cinematographer Piotr Kwiatkowski worked on two of Kieślowski's early documnentaries and returned, years later, on the Three Colours film trilogy.

Referring to the introduction of martial law in Poland in 1981, No End tells of the aftermath of a lawyer dying, whose wife struggles to come to terms with her loss while the lawyer’s last client is imprisoned.

The film was criticized by the authorities, the underground opposition and Catholic church on its release in 1985, but today it is considered one of Kieślowski’s most powerful achievements.

Soon afterwards, Kieślowski made a series of television films inspired by the ten commandments. He made longer versions of two episodes for cinema – Krótki film o zabijaniu (A Short Film About Killing, 1988) and Krótki film o miłości (A Short Film About Love, 1988). These films gained international recognition and transformed Kieślowski’s reputation from a local film director to a world cinema auteur.

This new period in Kieślowski's life was marked by his international career - travelling around the world, from festival to festival. In 1988 and 1989, with his films, he visited events in Europe, North and South America. He became a kind of migratory filmmaker.

His subsequent movies were international productions, in which his focus was observing European society. After the final fall of the Iron Curtain in 1989, Kieślowski made films showing how Europeans from East and West can unite despite various experiences in the post-war history of the countries they come from.

Kieślowski's film output was completed with the trilogy of Three Colours: Blue, White and Red (1993/94). The titles of the films refer to the colours of the French flag and the slogans of the French Revolution liberte, egalite and fraternite. The films ask the question: what is freedom, equality and brotherhood in the late twentieth century?

Each of the films takes place in a different European country: Blue in France, White in Poland (and in France) and Red in Switzerland, with three French actresses appearing in each. In a way, the whole trilogy of apolitical and intimate stories praise the unification of Europe.

The three-colour trilogy was a great international success. Blue won Kieślowski the Golden Lion at the Venice International Film Festival and for White he was awarded with Silver Bear at Berlinale. Red was nominated for the Academy Awards in three categories: for best direction, screenplay and cinematography.

In 1993 Kieślowski announced that he was to retire from directing.

Enjoy this story? Then sign up for our monthly newsletter (opens in new window)
France Poland film migration Krzysztof Kieślowski