Jenny Lind was a hugely talented Swedish opera singer who enjoyed worldwide fame and acclaim in the mid-19th century.

In the 2017 Hollywood film The Greatest Showman, there is a show-stopping moment when the main character P T Barnum watches a musical performance by Swedish singer Jenny Lind.

While the film's story takes dramatic license with the story of Barnum's circus, the real Jenny Lind was a hugely talented Swedish opera singer who took the USA by storm in the 1850s.

Born in Stockholm on 6 October 1820, this year we celebrate her 200th anniversary.

Lind's talent was discovered when she was over-heard singing by the maid of Mademoiselle Lundberg, the principal dancer at the Royal Swedish Opera. The maid retuned the next day with Lundberg who arranged for Lind to have an audition for the Royal Dramatic Theatre.

Aged 10, Jenny Lind started to play in more than 30 spoken roles, with her first starring role coming when she was aged just 17 - playing Agathe in Weber's Der Freischütz. By 20, she was a member of the Royal Swedish Academy of Music and court singer to the King of Sweden and Norway.

Through the 1840s, Lind toured extensively, performing in cities and countries across Europe - Denmark, Berlin, Vienna, London - becoming an international star with the nickname 'the Swedish Nightingale'. 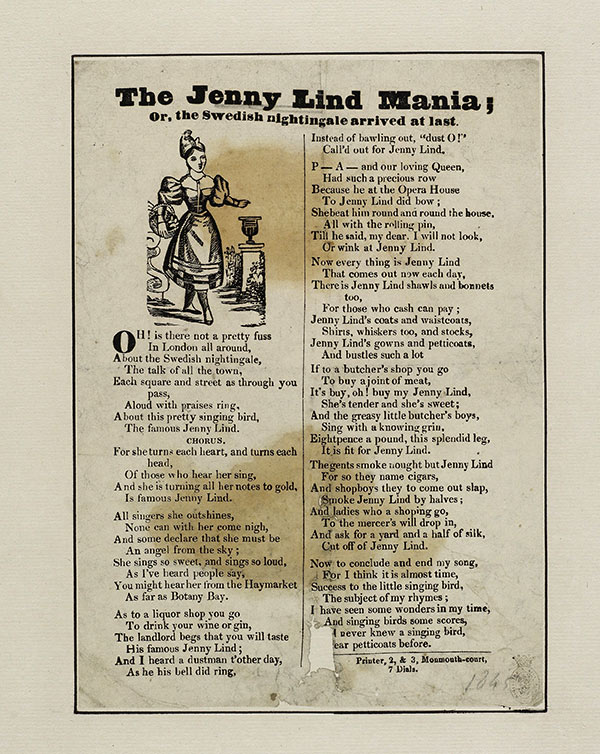 Jenny Lind mania (or, The Swedish nightingale arrived at last), A. Ryle and Co., National Library of Scotland, No Copyright - Non-Commercial Use Only

In 1849, PT Barnum approached her with an offer to tour the USA.

Realising it could benefit her favourite charities in Sweden, Lind agreed. Barnum was a master of publicity, promoting her tour well before she arrived in New York. The tour was a huge success, with Lind performing 93 concerts for Barnum. After a year, she began to tire of Barnum's relentless publicity and parted ways with him, but continued touring under her own management for almost another year.

This is the tour depicted in The Greatest Showman, but there's no historical evidence of a romance between Barnum and Lind (as implied in the film).

Near the end of the tour, in February 1852, Lind married her pianist and conductor Otto Goldschmidt. They returned to Europe, living first in Germany and, from 1858, in England. Between 1853 and 1861, the couple had three children.

From then on, she performed in concert halls rather than grand opera houses. In 1882, she was appointed professor of singing at the newly founded Royal College of Music.

In 1887, Lind died aged 67. The technology of the time means that, despite her long and successful career, no recordings of her voice were made or remain today.

Her talent and fame are remembered today in the name 'The Swedish Nightingale' and commemorated in music and films, placenames and statues and even toys, banknotes and ship figureheads.