Iridescence is a phenomenon where our eyes perceive spectrums of colours, based on how light falls on surfaces. We see iridescence in nature - it can be spotted on some minerals, feathers of some insects, birds, fish, shellfish, and as part of many natural phenomena such as oil films on water and soap bubbles.

Iridescent objects and products made by contemporary manufacturers of glass, ceramics, paint, cosmetics, and even textile might seem as a modern invention - but also reflect some eclectic lustre.

Iridescence can also be seen on specimens of archaeological glass. The phenomenon occurs on them naturally, due to their long time underground, or artificially, due to specific production techniques.

Light is composed of a full continuous array of the colours of the visible spectrum. Each colour surface reflects one part of this electromagnetic spectrum, while the remaining part is absorbed.

We can see this most clearly when white light passes through an optical prism. Each colour leaves the prism following its own wavelength, causing the light to separate into the colours of the spectrum. The colour of an object is determined by absorption, i.e. the reflection of wavelengths of a certain part of the spectrum characteristic of a specific surface.

Iridescence surfaces are usually composed of one or more (semi-) transparent layers.

When white light reaches a thin transparent film (layer or coating), one part of light is reflected from the upper surface of the film while the remaining part from the surface below the layer or layers. When the reflected rays merge (constructive interference), they create the effect of iridescence. What we see depends on our position, the angle at which we are looking at the object and the angle of the ray of light. 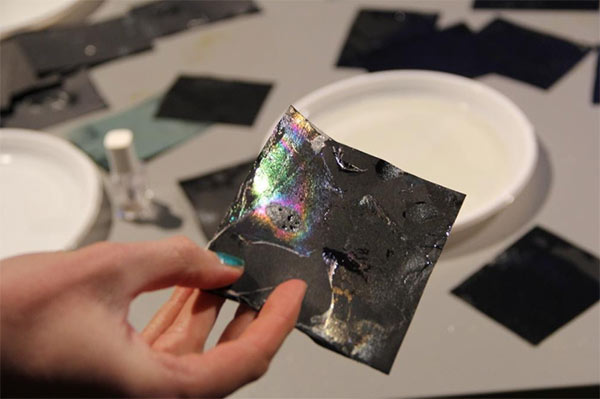 As it causes a sensation in the visual system, it is one of perceptual observations that aroused interest among applied artists. Ancient glass on which the phenomenon naturally occurs as thin flakes form on the surface resulting in an overflow of spectral colours have given a special impetus for the creation of the effect of iridescence.

In making glass and ceramics, iridescence can be ‘artificially’ formed by treating the surface with metal oxides and exposure to acid vapours in a reducing atmosphere.

Louis Comfort Tiffany (1848-1933) was an artist and designer, and son of the founder of the famed jewelry producer. He is credited for patenting the production of iridescent glass - Favrile glass (from fabrile, possibly denoting handcrafted origin).

He was influenced by the glass collection of the Victoria and Albert Museum (former South Kensington) during his visit in 1865.

Objects with iridescent properties from the Museum of Arts and Crafts in Zagreb collection were manufactured by a variety of designers, artists and glassworks from around Europe and beyond.

There are objects from Louis Comfort Tiffany from the USA, the Austrian firm Pallme-König & Habel, French designer René Jules Lalique, and two glassworks from Bohemia - Wilhelm Kralik Sohn and Löetz - as well as Croatian glassworks such as Osredek.

EXPLORE MORE: Iridescent objects from the Museum of Arts and Crafts Zagreb

Lustrous glass objects designed by Croatian painter and sculptress Antonija Krasnik were produced at the Viennese glassworks Bakalowitz und Söhne. Each of these designers and manufacturers, experimenting with their own techniques, developed unique objects and effects.

Iridescence can also be present on ceramics such as the Art Nouveau facade of Kallina House in Zagreb. The iridescent water lilies 'inked' on the building's tiles rise above floral wrought-iron balconies that overlook the street intersection.