Considering the children of the First World War

What Europe’s children went through during the First World War is often overlooked by historians. Understandably, perhaps, if they are focusing on ‘big’ issues like the horrors of trench warfare or the changing role of women on the home front. But what was the First World War like for Europe’s smallest citizens? How many children spent their formative years fearing for their fathers’ lives? Or caring for their little brothers and sisters while their mothers worked in munitions factories?

Since 2014, we have been adding an image to both of these collections every week, as well as to Europeana 1914–1918 [http://www.europeana1914-1918.eu/en\]. There are now over three hundred images available to view, and looking at them both individually and collectively provides viewers with some fascinating insights into national and personal attitudes and experiences during the First World War. They say that a picture is worth a thousand words, and it is hard not to feel a pang of pity when looking at the apprehensive face of the little girl posing with her unsmiling soldier–father and solemn mother in this photograph. 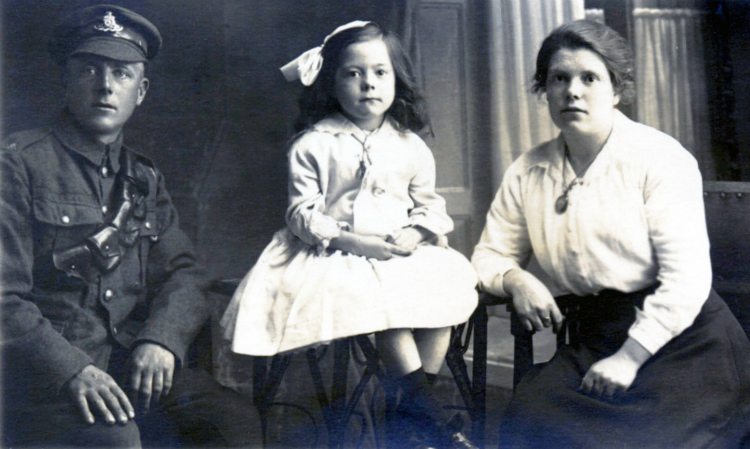 She, like most of the children in our ‘The Army Children of the First World War: Faces and Families’ collection, is nameless, and one of the reasons why we are sharing our photographs online is in the hope that someone will recognise these faces and tell us more about them. In most cases, all that we know for sure about the children in the photographs is that their father was a soldier in the British Army – we know this because he is pictured wearing his uniform. There are other interesting types of photographs in this collection. By combining separate photographs of children and their soldier–fathers, for instance, one type graphically illustrates how the First World War forced families apart. 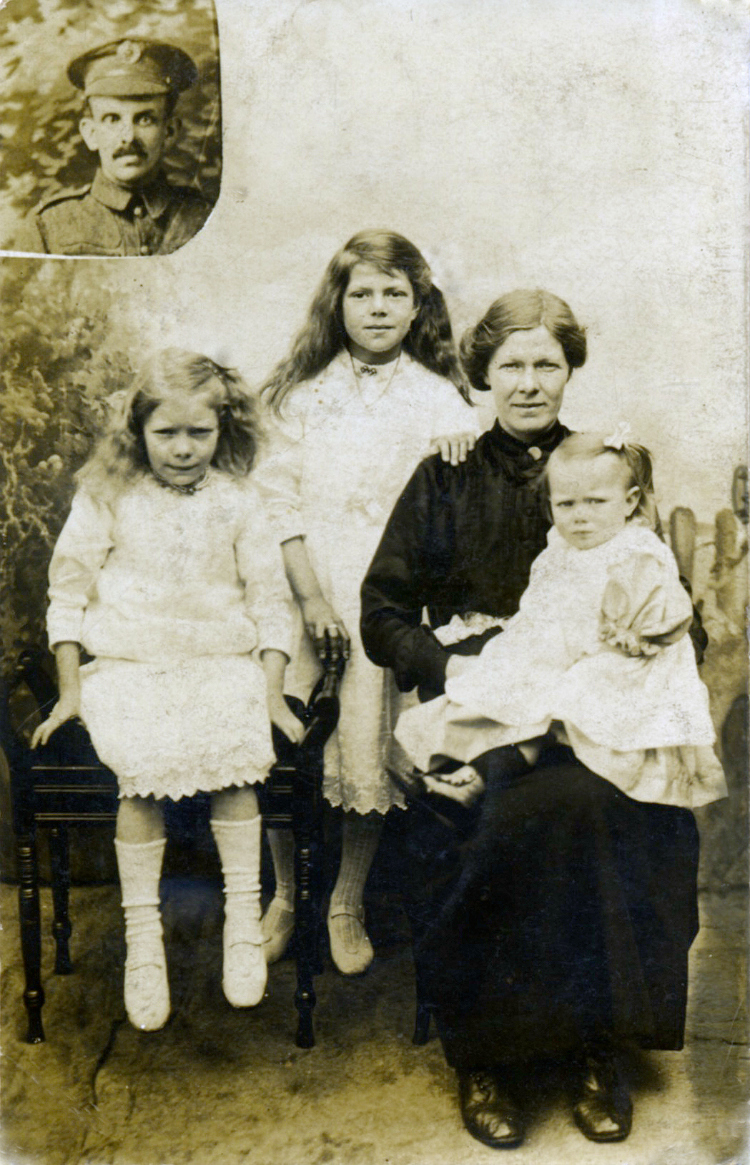 A separated British soldier's family, The Army Children Archive, CC-BY-SA Another shows children dressed up in replicas of soldiers’ uniforms. 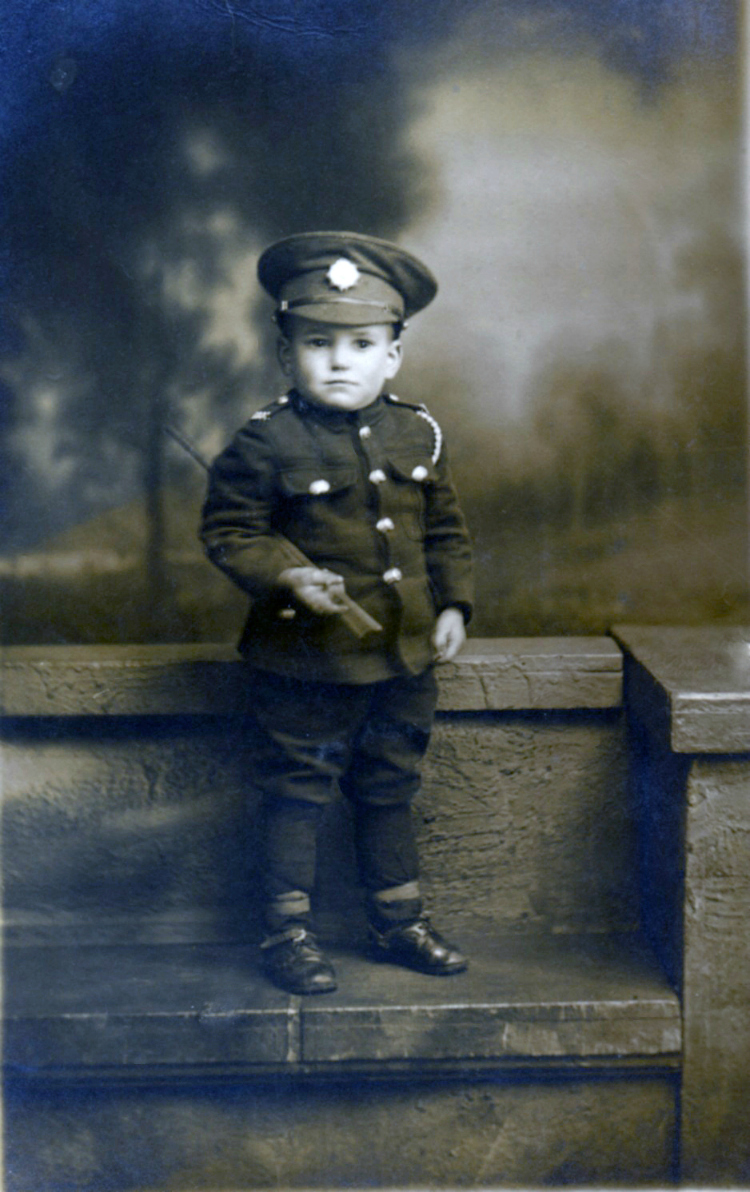 A boy photographed in Newcastle, The Army Children Archive, CC-BY-SA

Was this because they were keen to copy their soldier–fathers, or to display their patriotism – or both? A few show children wearing real items of soldiers’ uniform and kit. 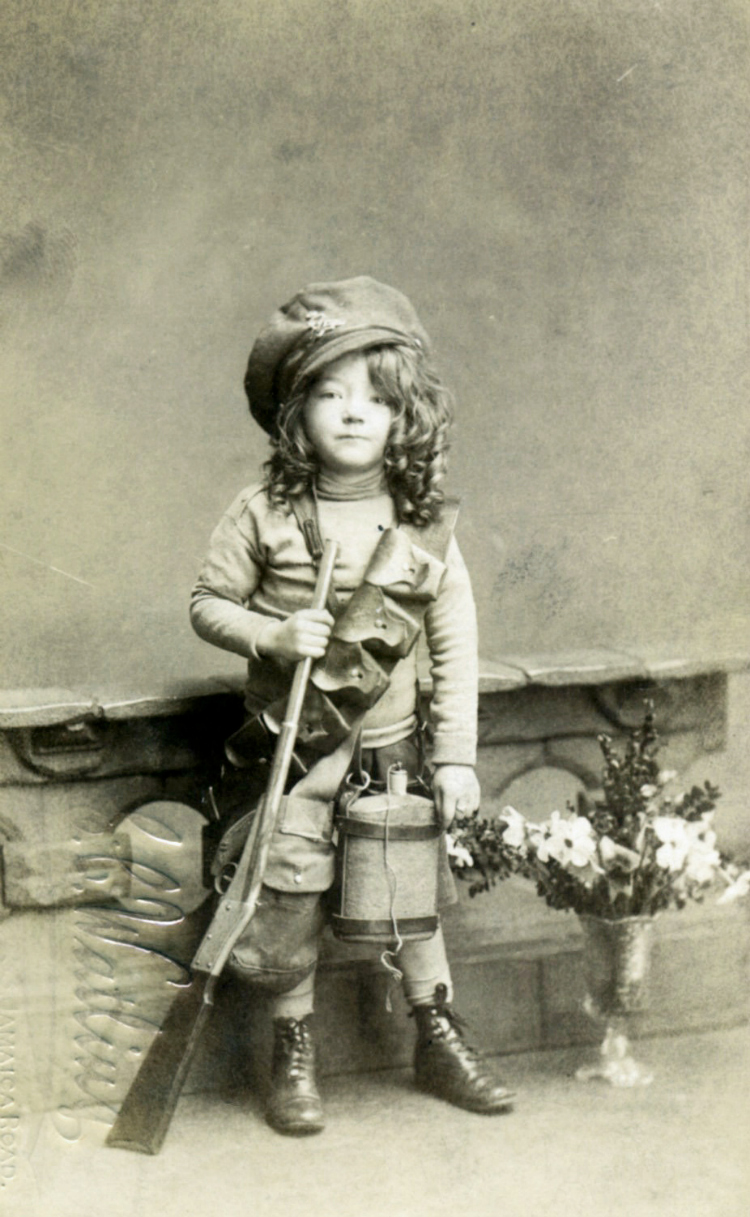 A girl dressed as a British Soldier, The Army Children Archive, CC-BY-SA

Some of the commercial photographic images in ‘The Army Children of the First World War: a Sentimental View’ collection also feature children dressed as soldiers, often with captions stating that they are ‘following in father’s footsteps’. 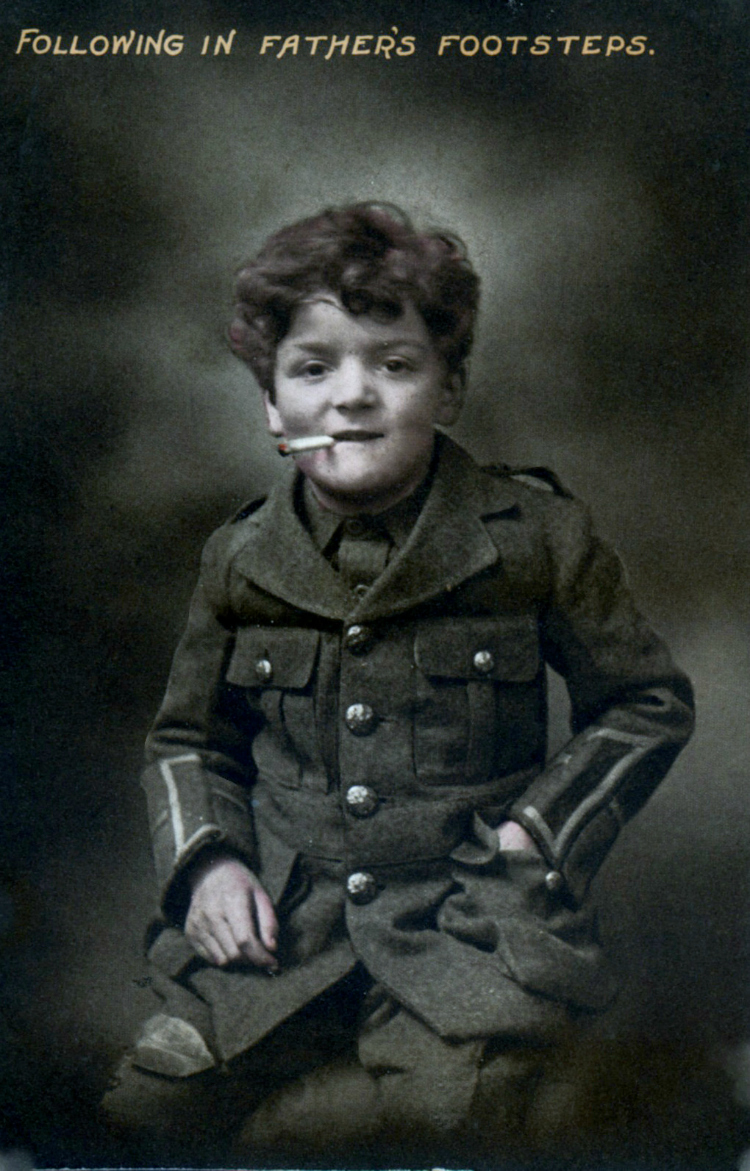 First World War picture postcards are often especially interesting because they illustrate people’s wartime concerns. So we can clearly see that the sadness of being separated from their fathers at the front darkened many British children’s lives. 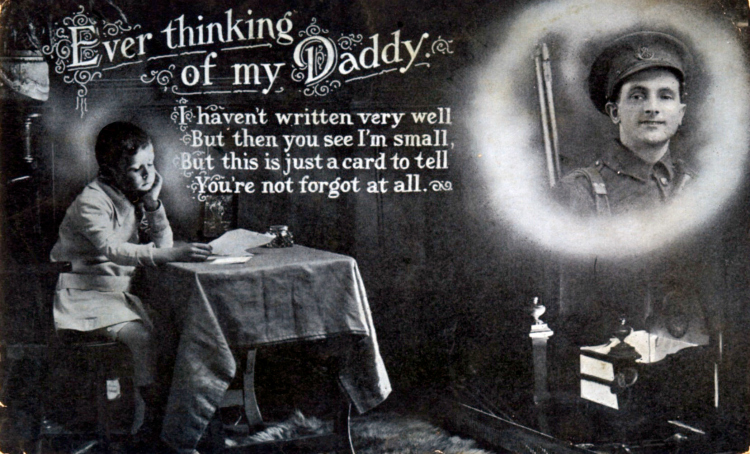 Ever thinking of my Daddy, The Army Children Archive, CC-BY-SA

And how many of them, encouraged by their mothers, must have prayed for their soldier–father’s safety before going to bed at night? 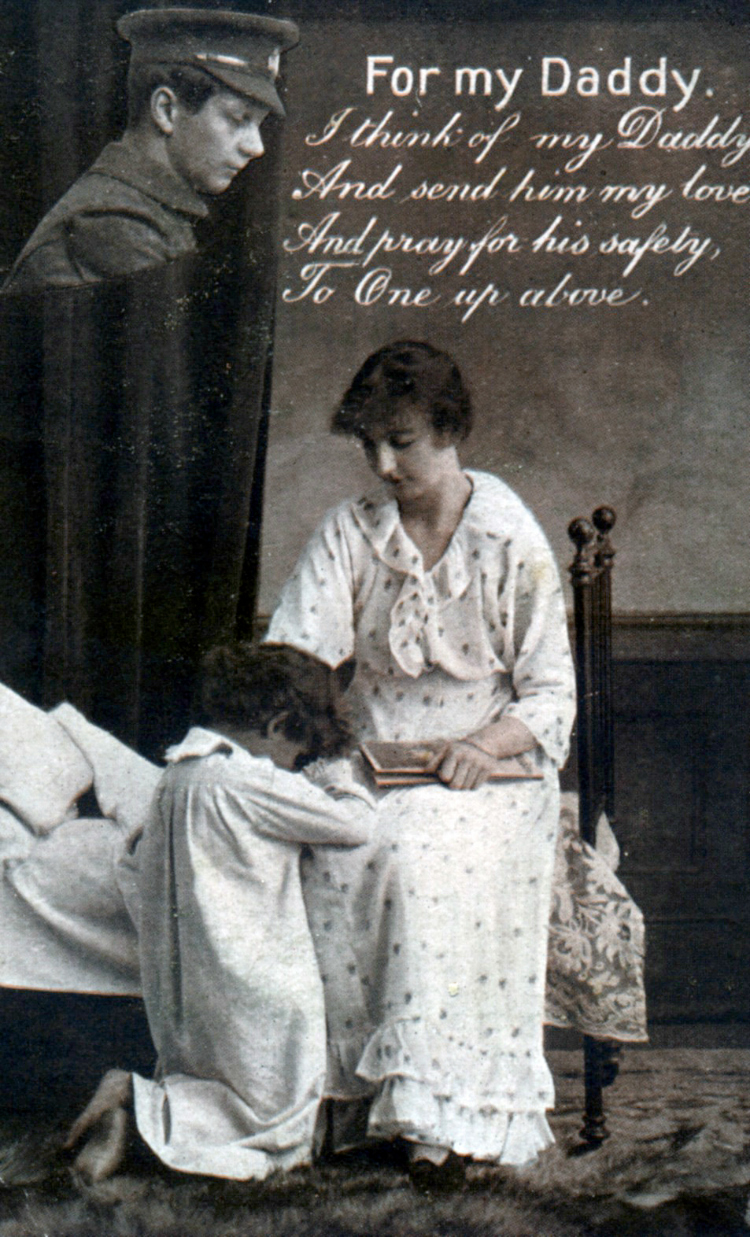 For my Daddy, The Army Children Archive, CC-BY-SA

A significant number of British postcards featuring children were produced for propaganda and patriotic purposes. Some are explicitly anti-German. 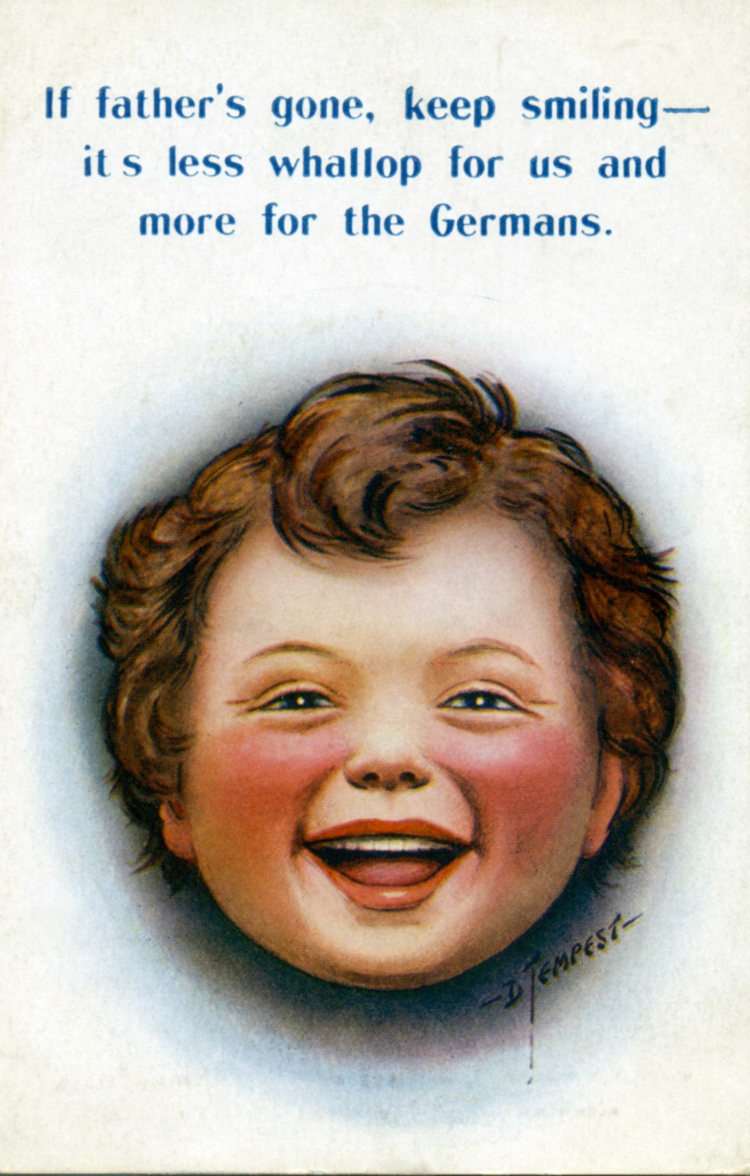 Less whallop for us, The Army Children Archive, CC-BY-SA

The aim of others – often enlisting childish cuteness – was obviously to encourage men to join the army. 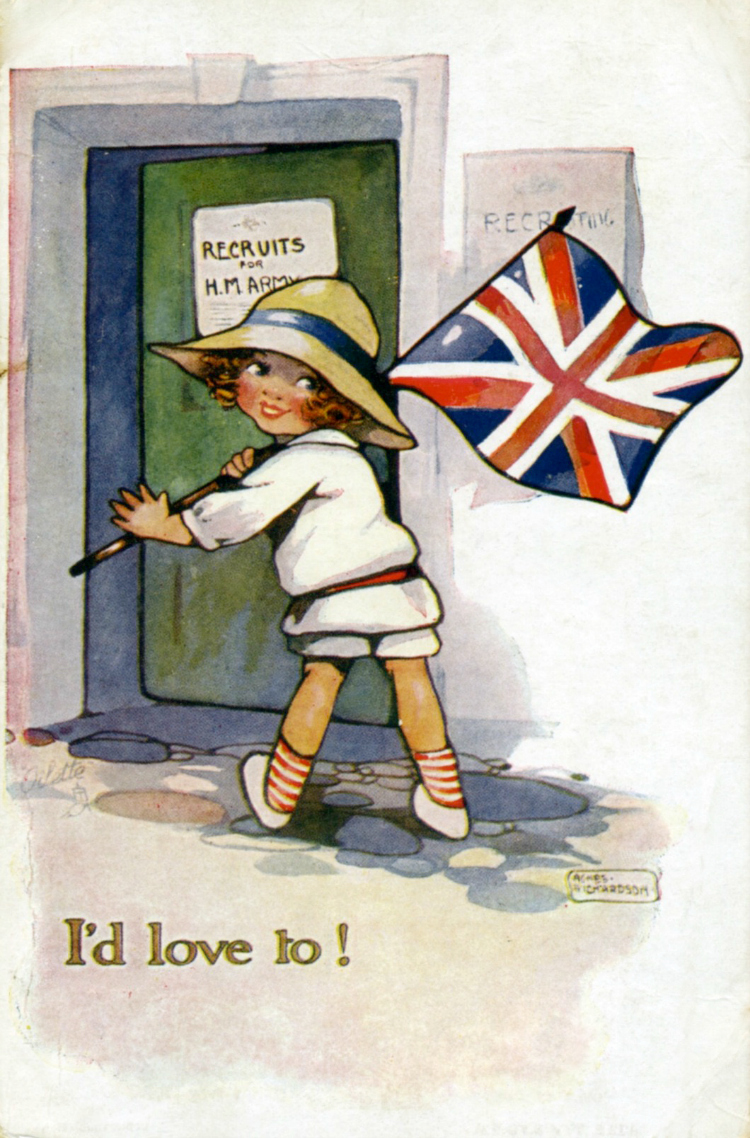 I'd love to!, The Army Children Archive, CC-BY-SA 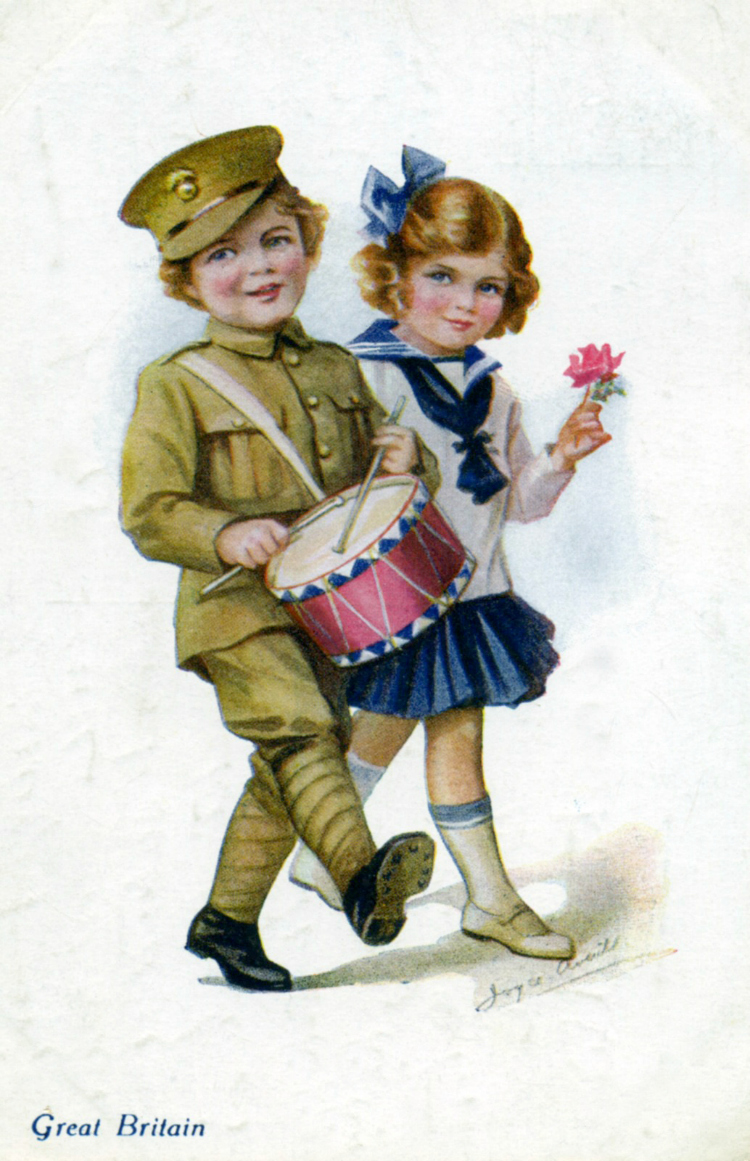 And yet another category aimed to inspire women and girls on the home front to ‘do their bit’ for their country, maybe by knitting socks for soldiers. 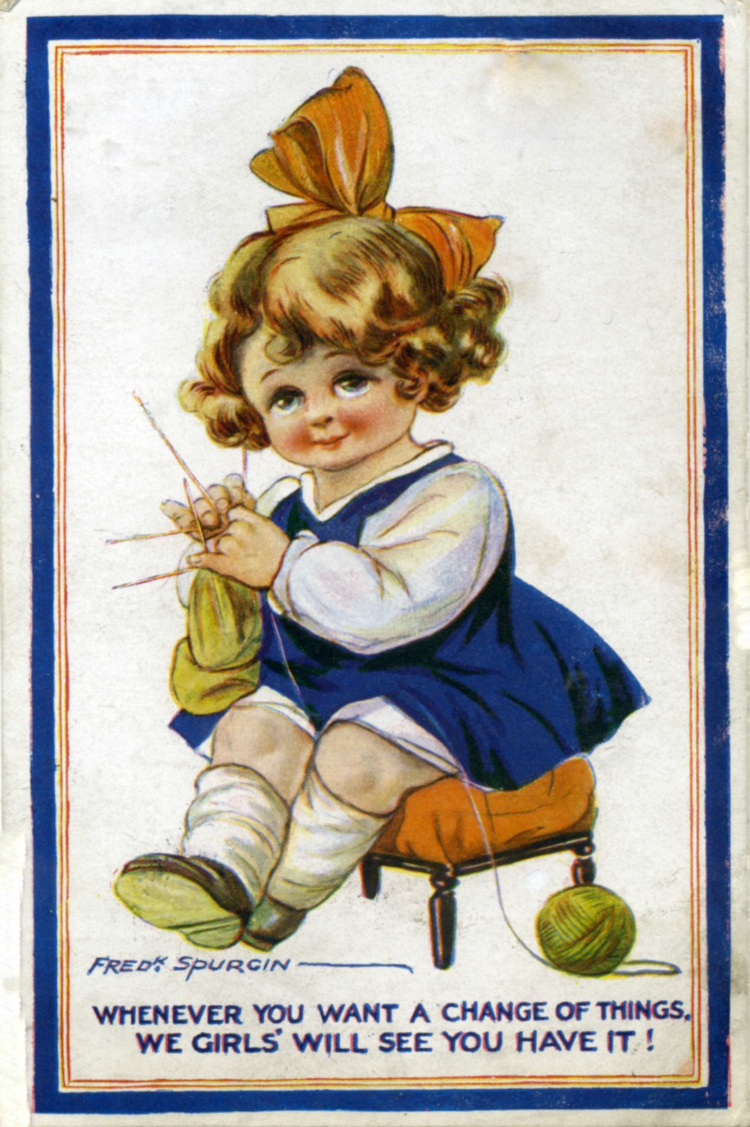 Knitting on the home front for soldiers at the front, The Army Children Archive, CC-BY-SA

The artist and photographers who created these images placed children in many kinds of situations and scenes – humorous, sad and warlike, to name just a few – to send their ‘government-approved’ messages. One of the joys of Europeana 1914–1918 is that organisations and individuals of many nationalities have contributed such a wide variety of items. Both of my grandfathers served as young soldiers in the First World War: one in the British Army, the other in the German Army, making them enemies.

That’s one of the reasons why I find comparing the British and German additions to Europeana 1914–1918 especially interesting. Take, for example, the family photograph from 1915 contributed by Helmut Blank, of German soldier Georg Grether with his wife, Bertha, and their daughter, Martha. 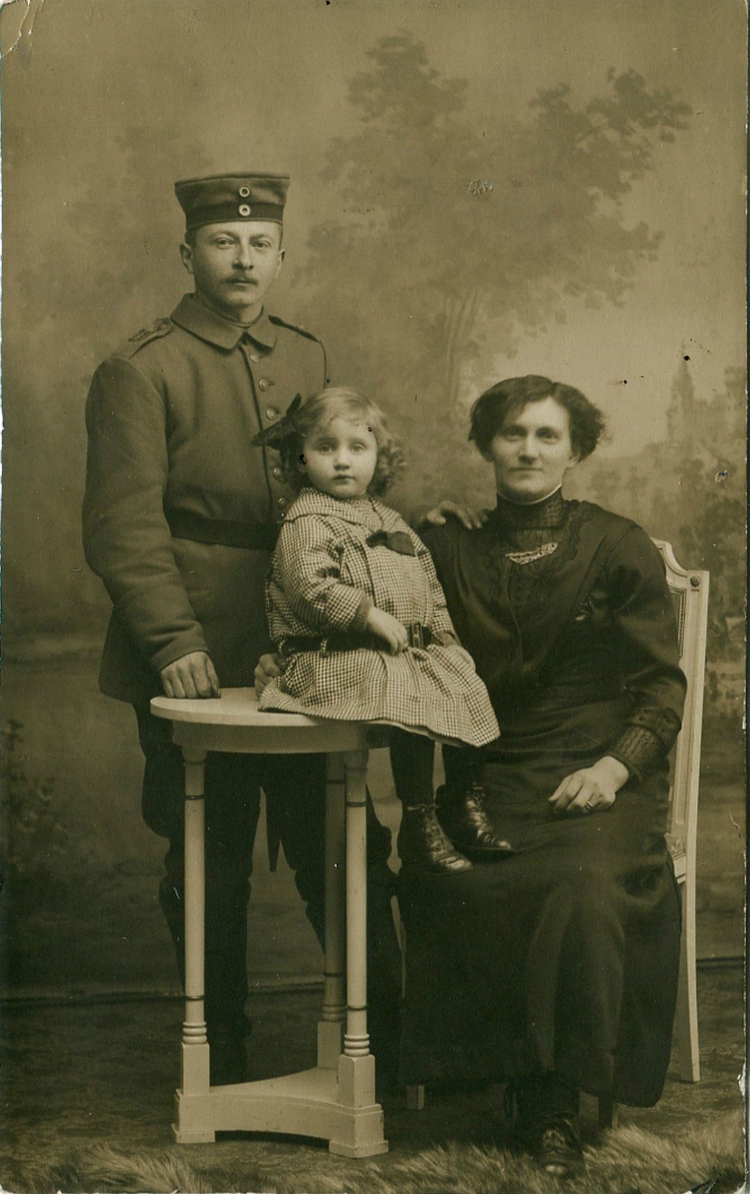 It is strikingly similar to many equivalent British images, underlining how war must have affected European families in the same ways, whatever their nationality. (And I was saddened to read that little Martha’s father was killed in June 1918.) Just as in British postcards, German children, too, are portrayed praying for, or thinking about, their absent soldier–fathers. 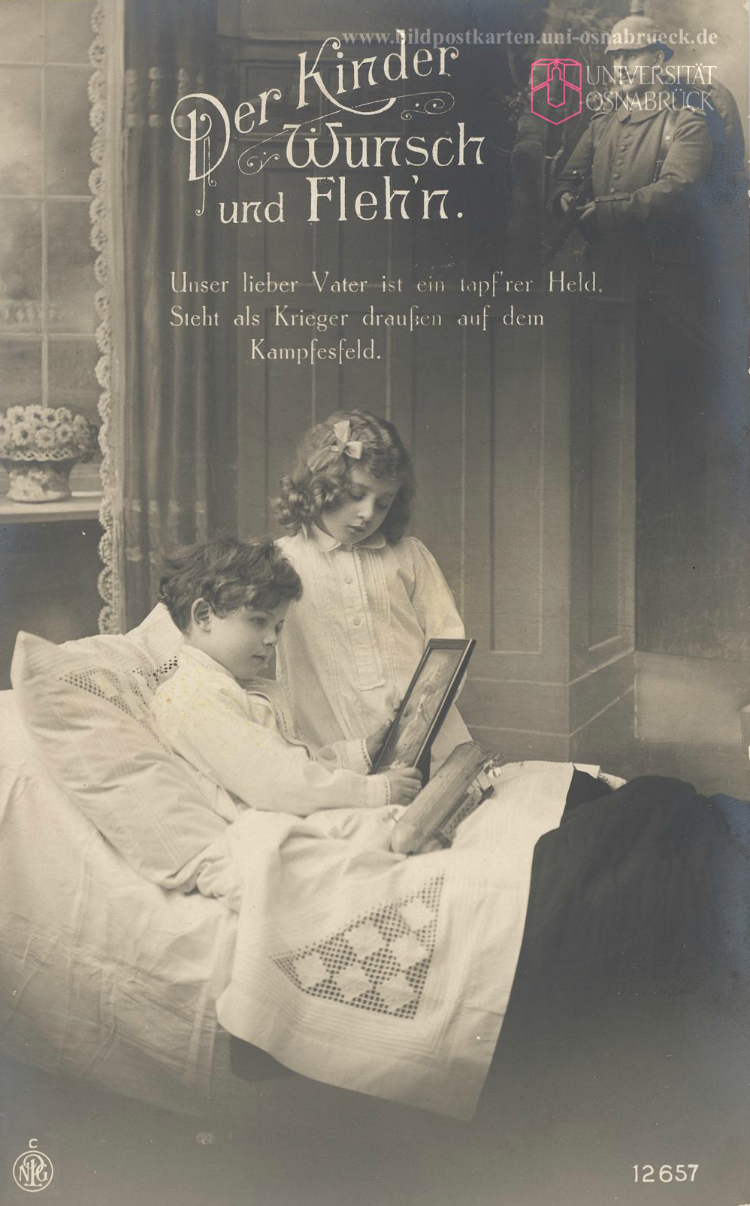 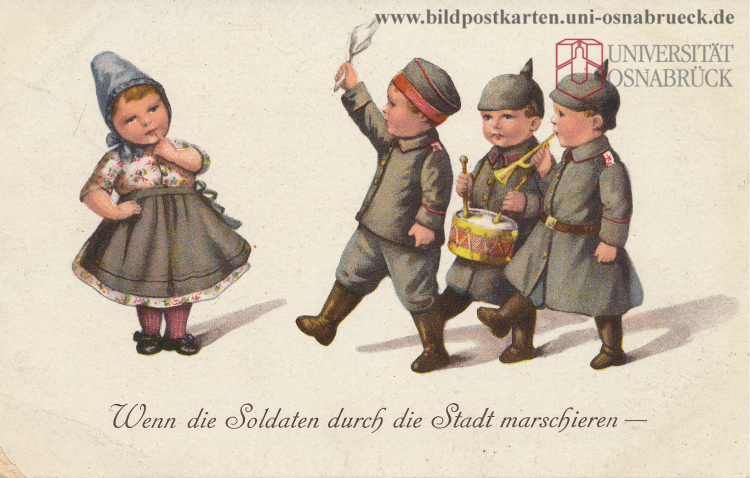 Other postcards show us ways in which the war affected German children: some must often have gone to bed hungry, for instance. 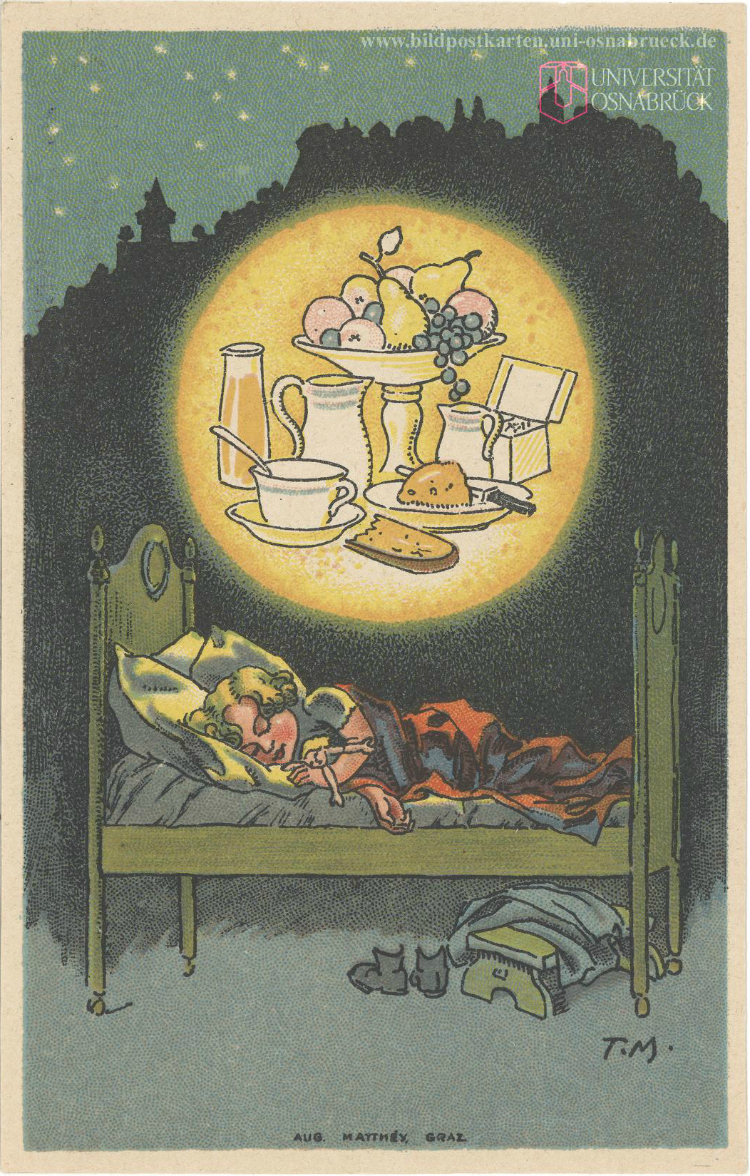 These are just some examples of the images featuring children that you can view on Europeana 1914–1918, and some of the reasons why they can be so informative and thought-provoking. Do take a look at the treasures showcased there, and please spare a thought for the children of the First World War.

The images contributed by The Army Children Archive (TACA) to Europeana 1914–1918 can be viewed by clicking on this link.