Today's Art Nouveau season guest post from one of the world's leading collections of glass, Düsseldorf’s Glasmuseum Hentrich. Dr. Dedo von Kerssenbrock-Krosigk introduces us to the innovative collector Gerda Koepff (1919–2006), whose bequest of Art Nouveau glass is an important part of the museum’s collection today.

Art Nouveau plays a particularly strong role within the collections of the Glasmuseum Hentrich, which forms part of the Museum Kunstpalast in Düsseldorf.

The museum owes this speciality to the donation and bequest of two private collections of outstanding quality: the Helmut Hentrich collection (after which the museum itself is named) and the Gerda Koepff collection. 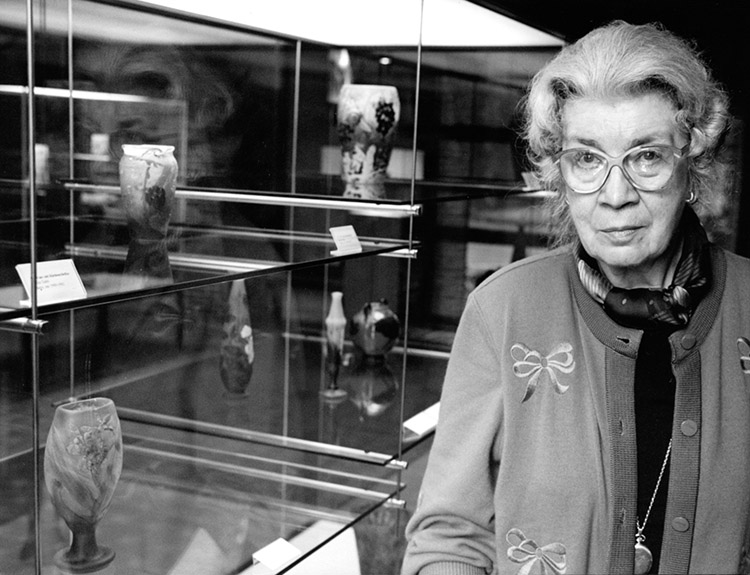 Gerda Koepff at the exhibition opening in the Tonhalle, Dusseldorf, 1998. Photograph by Wilfried Meyer. CC BY-NC-ND.

French art glass of the Art Nouveau period is a fascinating topic for collectors. From the late 1870s, an important change took place in the Paris sale rooms of François Eugène Rousseau (1827–1890), in the glass factories of Emile Gallé (1846–1904) and the Daum brothers in Nancy, and in many glass workshops throughout Lorraine and the Ile de France.

Until then, glass had been used for practical objects, even if at times highly luxurious ones; now, it came to be seen as a splendid medium for artistic expression. While retaining some of its utilitarian function in the shape of vases, bowls and dishes, Art Nouveau glassware gradually became an art form in its own right. 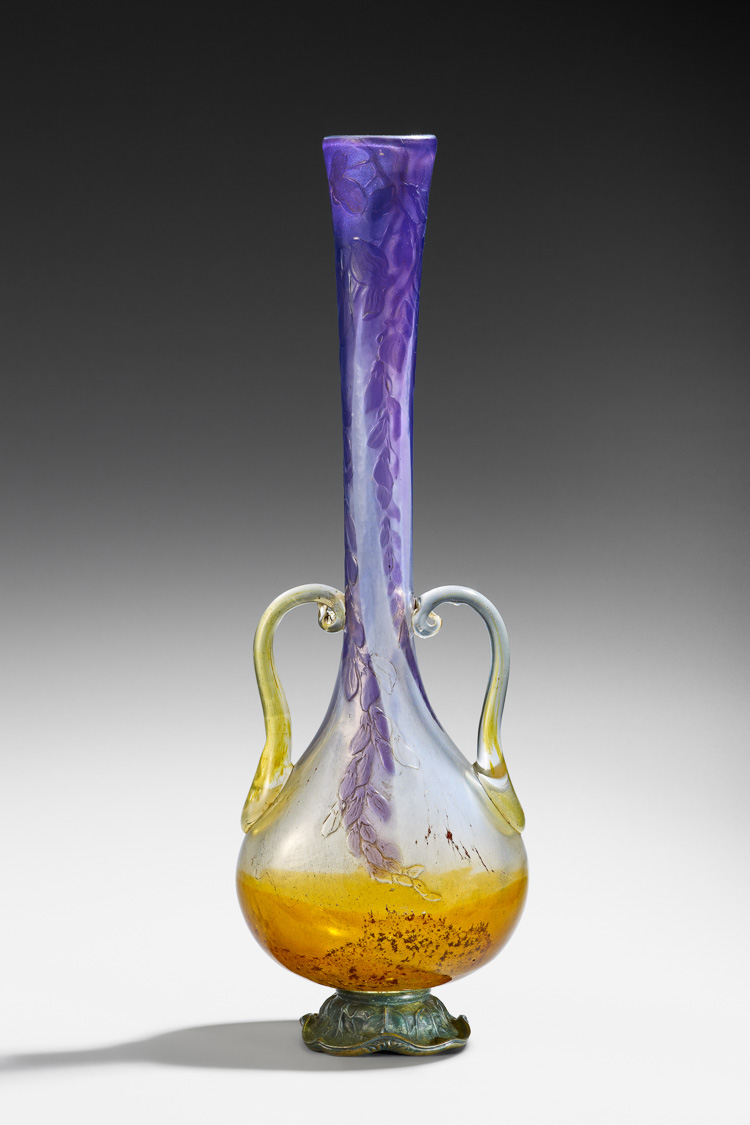 Gerda Koepff, née Stoess (1919–2006), was born into a family of industrialists in Eberbach, near Heidelberg in south-western Germany. Her elder brother Harald Stoess was killed in action in World War II and she took his place in the family company.

She became the company’s executive director from 1960 until 1975, and continued to oversee the firm successfully until her 80th birthday. It seems that Gerda Koepff’s interest in art glass art of the Art Nouveau period was not a family inheritance. Her parents’ generation had grown up during the heyday of Art Nouveau and had witnessed its decline into mass-produced and unimaginative objects.

In the 1960s, when Koepff began acquiring Art Nouveau glassware, progressive German households were typically furnished with modernist objects and decoration. Gerda Koepff thus started to build her collection against the zeitgeist. 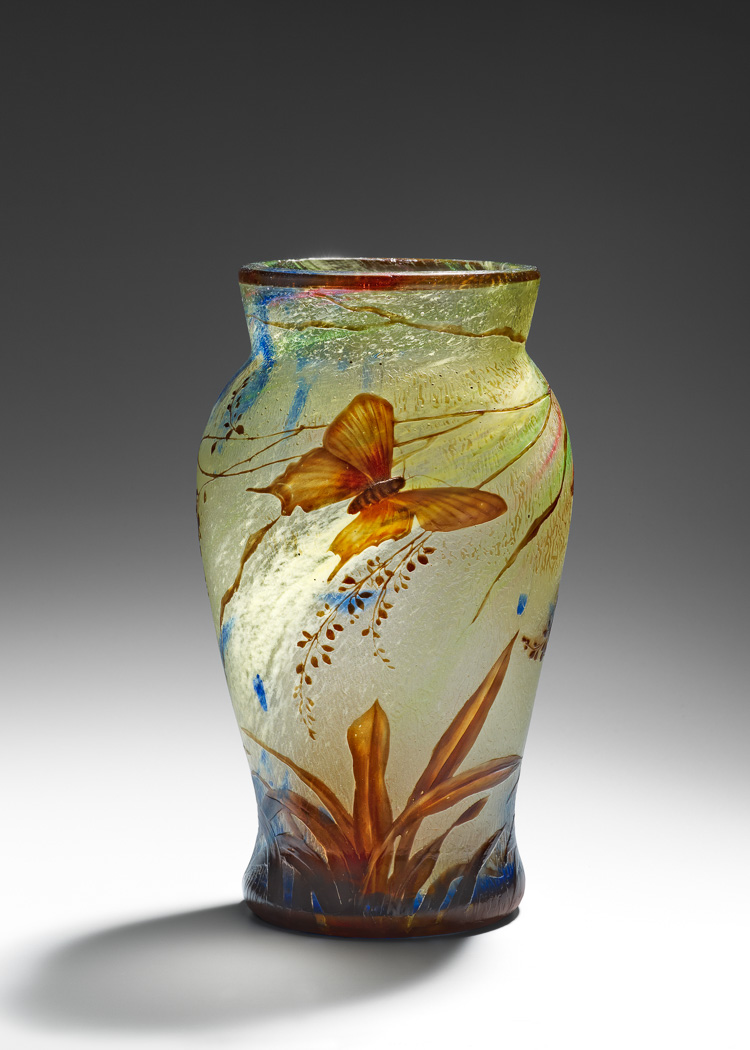 Koepff developed an eye for quality decades before collecting Art Nouveau became popular – and expensive. Initially, she merely intended to decorate the living room of her new home. Soon, however, her interest became deeper and more refined as she began to perceive the differences in quality and execution. Koepff’s discernment is particularly apparent in her interest in Daum glass.

As early as 1968, she found the prevailing contempt for this company’s products entirely unjustified, and she proved her point by purchasing several Daum masterpieces, which form a major part of her collection today. 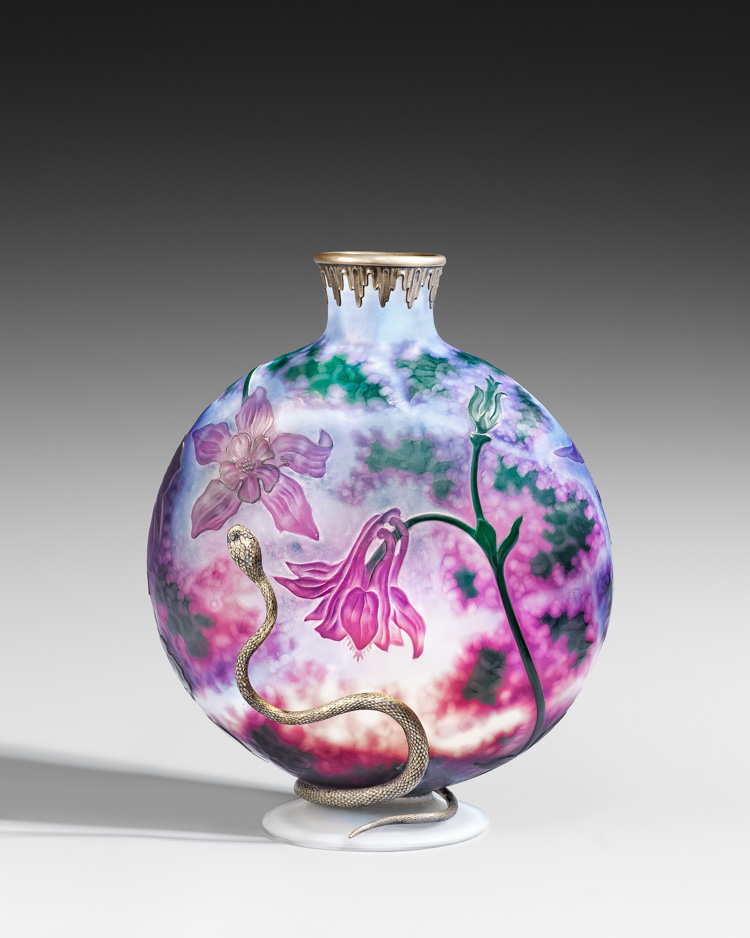 The Koepff collection reflects the collector’s personal taste and eye. It does not have a rigid structure or principle, and while the focus is on French Art Nouveau, Gerda Koepff never aimed for completeness in an academic sense.

It contains a range of artists and manufacturers, but above all, it is a personal selection of individual pieces. The vases, plates and bowls in her collection tell us about poetry, symbolism, a love of nature and the continuous expansion of the limits of glass. “At some point,” she said in an interview, “I had the feeling of having reached the end; the collection had a look. And that was where I wanted to stop.”

Learn more about the collection of the Glasmuseum Hentrich and why not check out our Art Nouveau exhibition too?