History of Karagiozis shadow theatre, a staple summer evening entertainment for many in Greece

Shadow puppet theatre is a staple summer evening entertainment for many in Greece, with what’s known as Karagiozis shadow theatre a childhood favourite. 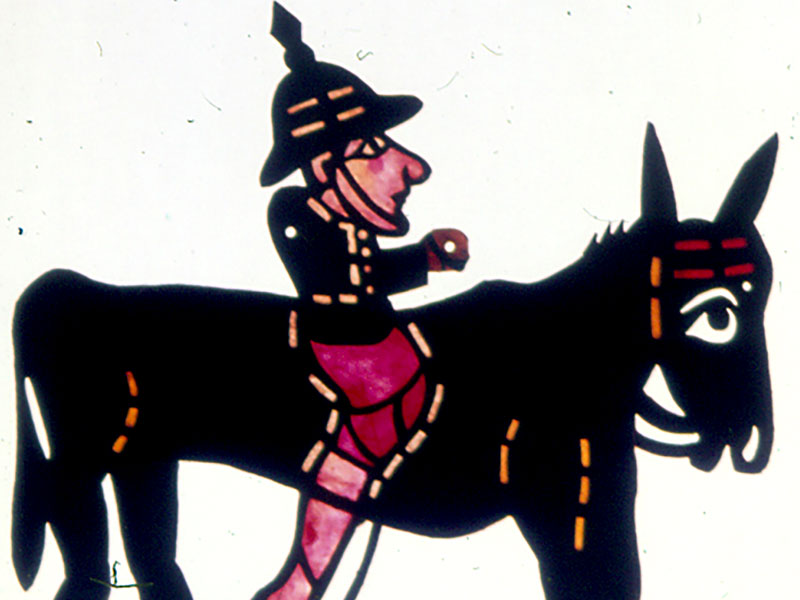 Shadow theatre is popular in many lands - from China, India, Persia, Indochina and Asia Minor.

It seems to have come to mainland Greece, probably from Asia Minor during Ottoman rule. As the Ottoman Empire grew, the shadow puppet theatre tradition spread, evolving and adapting according to local customs, languages and stories, becoming a favorite folklore entertainment of the diverse cultures of the Ottoman Empire, including Greeks, Jews, Albanians, Turks and Arabs.

Within this multicultural society, shadow puppet theatre became multilingual and transnational, and was instrumental in keeping languages, folklore and cultural traditions alive.

The moral tales enacted by the puppeteers feature satirical observations about the social and political issues of the time - a form of social commentary understood by people of all classes.

The central character is Karagiozis, whose name now represents the genre.

Karagiozis is poor and uneducated, relying on his cunning and wit to extricate himself from precarious situations. He is a Greek folk hero for children and adults. Karaghiozis often mocks the various characters and includes them in his desperate adventures.

Although uneducated, Karaghiozis manages to bluff his way into different jobs, allowing the puppeteer to satirise prominent figures, professions and contemporary issues.

The puppet theatre uses figures as archetypes representing the various ‘classes’ or characters of the time.

‘Hammer and sickle people’ represent the craftsmen of the city including Karagiozis himself.

‘Sword people’ are represented by Veligekas, the Albanian brute who often beats Karagiozis up for no reason.

‘People of the pen’ includes members of the Muslim and Christian hierarchies, clerics and diplomats, represented by Hatziyavatis, Karagiozis’ ‘frenemy’.

The puppet show is usually accompanied by a singer with a small group of musicians as well as enough shouting, noise and witty dialogue keep the audience laughing.

While some scenarios and plots are familiar, the puppeteer improvises and adapts storylines according to the audience, enhancing them with impromptu wise cracks and bawdy remarks.

The puppets are traditionally made from translucent camel or donkey skin. Worked until it is semi-transparent, the hide was cut into the desired shape with a special knife and painted with vegetable pigments.

The joints were made by threading strings of gut through perforations made with a needle. Some of the puppets have many joints, and are usually 35-40 centimeters high. The multiple joints allow the puppets to jiggle, dance and make gestures.

The puppeteer moves the puppets using detachable rods. Between the figures and the player (who was invisible), were candles or lamps that shed light to the figures and made their silhouettes visible to the audience through the cloth.

The hilarious movement of the characters - the innocent beatings, the strange and ragged clothing, the cunning word games and numerous linguistic mistakes - are what gave Karagiozis a special place in the hearts of Greek audiences for decades.

It is interesting to compare similar children theatres across Europe. In Germany, for example, in the late 18th century, in Nuremberg, a city that traditionally produced toys and had great lithography artists, Papiertheater was produced as a packed toy for children.

Based on a kids favourite, the travelling peep-show, a series of paper cut images of figures were positioned one after the other like an accordion. The set included a printed ‘stage’ of buildings and settings and simplified scripts for the children to re-enact the story. The stories were classic fairy tales, like Sleeping Beauty or adult plays adapted for children. The key attraction was that the children themselves put the play together, assembled the stage and acted the script.

Probably around the same time that shadow theatre found its way from the far east to the Balkans, 16th-century Italian commedia dell'arte legacy travelled north in Europe and found roots in localised versions. One of those were 'Punch and Judy', which emerged during the Restoration Period in Britain and became popular in France and other countries.

The figure of Punch is derived from the Neapolitan stock character of Pulcinella, a subversive character who acts as 'the voice of the people', something he and Karagiozis have in common, as well as the appearance: they are both hunchback with a huge hooked nose.

In fact, Karagoz, the Turkish version of Karagiozis, is said to be the integration of Pulcinella/Punch character into Ottoman culture, alongside his European 'cousins',such as Kasperle in Southern Germany and Austria, Polichinelle in France and Petrushka in Russia, even though the technique differs: the former is shadow theatre whereas the latter uses puppets.

Punch and Judy shows were traditionally marionette shows when they were brought over from Italy and intended for an adult audience, but were later reinvented in the glove puppet style to accommodate the characters' movements without the obstruction of strings and established primarily as children's entertainment during Victorian times.