Marbling techniques made endpapers beautiful and artistic, as well as a practical bookbinding tool.

Have you ever opened up a book and discovered that the inside of the cover had a beautiful illustration, colour or pattern?

The double sheet of paper partly glued to the inside of the cover of a book is called an endpaper - the first and last sheets of paper in a book, dividing text from cover. 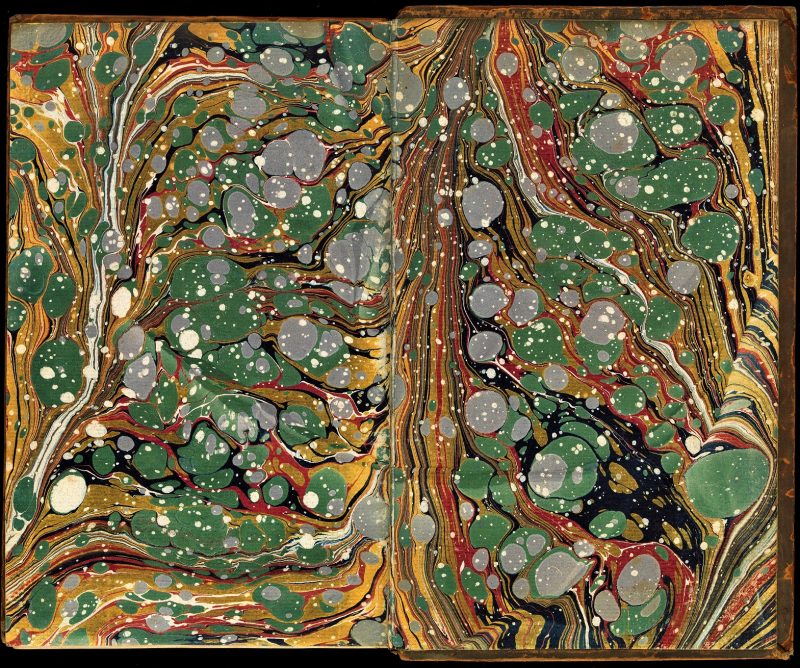 Historically, endpapers were often simply blank pieces of scrap paper, parchment or vellum that were used to keep the text safe from wear and tear. They might contain a bookplate showing ownership, or some scribbles where someone had tested a newly cut pen.

Decorated endpapers became popular from the 18th century, inspired by paper marbling techniques originating in the Middle East and Asia.

Marbling made the endpaper more than just a practical solution in bookbinding, but a place for beauty and art. Paper can be marbled using a variety of different techniques and styles. The result is always completely unique, no two marbled papers will ever be exactly the same.

Paper marbling is achieved by putting paper on top of patterened paint sitting on the surface of water.

Even though every piece of marbled paper is different, some simple patterns were very popular in the 18th and 19th centuries, acting as starting points for more intricate and unique designs.

A nonpareil pattern (nonpareil is French for 'without equal) is one of the basic patterns in paper marbling. It is made by using a comb-like implement to pull streaks across the marbling paint.

The Turkish pattern, or 'stone' pattern, is one of the most used basic patterns in marbling. Bristles or a brush are used to sprinkle different colours of paint down on the surface of the water.

The different colours push each other away, creating a swirled, earthy look.

The 'Italian pattern' was most-likely named as it resembles the patterns found in real Italian marble. 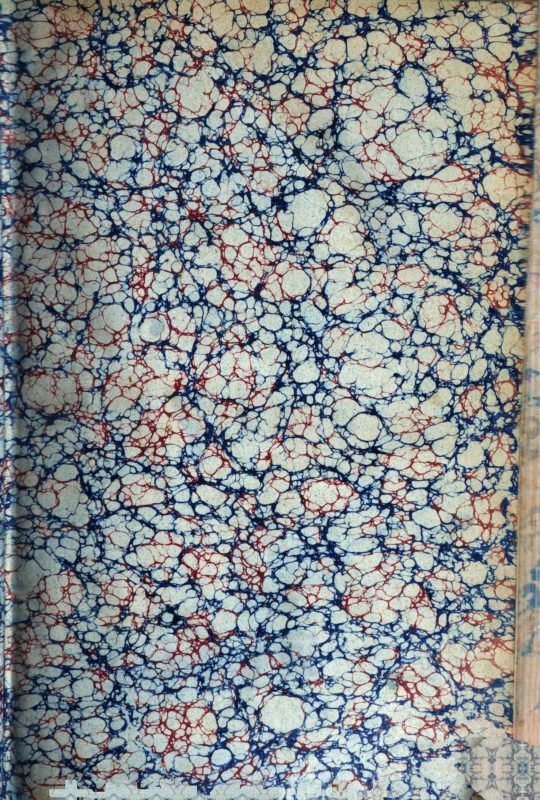 While printing technology advanced throughout the 18th and 19th centuries, endpapers became more lavishly decorated with different kinds of patterns and illustrations.

Marbled paper increasingly became machine-made, with other types of illustrations - such as floral or geometric patterns - began appearing on endpapers.

Endpapers are also a good place to put maps. They can cover two full pages at once, or even folding out to show things on a larger scale.

Marbling paper is an easy and fun activity to do at home, so if you feel creative you can go look up one of the many tutorials online on how to marble paper!

With repetitive patterns, embossing and gilding, marbled paper is just one of the myriad ways to decorate endpapers today. However, generally, Books printed today make less use of endpapers.

Now and then, you'll open up a book and be pleasantly surprised by the decoration of its endpapers.

Feature image: Endpapers with marbling effect. In Volume 3 of 'The naturalists' miscellany…' by George Shaw, 1813, Wellcome Collection, CC BY