Schiaparelli was born on September 10, 1890, in Rome, Italy, in an aristocratic family. While in Rome, she studied philosophy at university, and then moved to London, where she later married Count William de Wendt de Kerlor. The coupled lived in New York for a while, where Elsa encountered the fashion world by working a boutique selling French fashion.

After the break-up of her marriage, she moved to Paris, where she decided to set up her own clothing brand in 1927.

Schiaparelli's debut collection featured a series of sweaters with big bows in trompe-l’oeil motif. An editor from French Vogue saw them and immediately decided to feature the designs on the magazine. After knitwear, she produced bathing suits and ski-wear, also including some avant-garde designs, as the so-called "divided skirt”, a sort of pleated shorts - one of the first time something like this was proposed for women.

Schiaparelli is today most remembered for evening-wear, which she added to her collection in 1931.

In her witty creations, humour and fantasy came together in sophisticated and very conceptual kind of couture. Schiaparelli decided to include in her most precious creations intellectual references that could turn the clothes in something else, applying the artistic methods used by the Surrealists. Schiaparelli was in fact a close friend of artists as Jean Cocteau and Salvador Dalì, with whom she used to collaborate for her creations, having them design textiles and suggesting ideas for the construction of the clothes.

Schiaparelli was pioneering, challenging the limits of traditional couture. She pushed the boundaries of acceptable couture standards, and played with the accepted definitions of 'high' and low' fashion.

For instance, her designs made use of visible zips in couture, something that had previously been confined to underwear or cheaper productions.

Schiaparelli discontinued her couture business in 1951 and closed her design house 1954 due to heavy debts, but continued her work in design producing accessories and wigs.

Her 1954 autobiography Shocking Life was the coronation of the activity that she loved: 'make clothes.’ Here, her life is told like a sort of fairytale, in which the characters seem to be lost at times, and finally find themselves again during the journey and thanks to fashion. 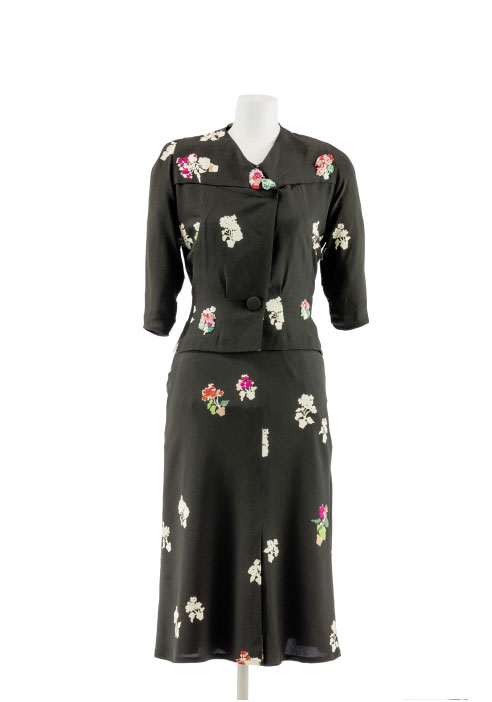 A direct line can be drawn between Schiaparelli’s life, creations and even her writing style. She’s  playful and carefree - from moments in which he speaks of collaborations with great artists to the descriptions of her husband leaving her for the dancer Isadora Duncan.

Elsa Schiaparelli's life was, in itself, a sort of surrealist “ready-made”: something transported in a context different from its own in order to become an artistic creation. A ready-made made by fate, in which Elsa Schiaparelli, a bourgeois Roman destined for a cultured and idle life, decide instead to “make clothes” and become famous for it, following her tenacious soul.