A life devoted to art

Olga Boznańska was a notable Polish painter of the turn of the 20th century. In a special guest post, curator Dr Piotr Kopszak of Muzeum Narodowe w Warszawie explores her life and work. 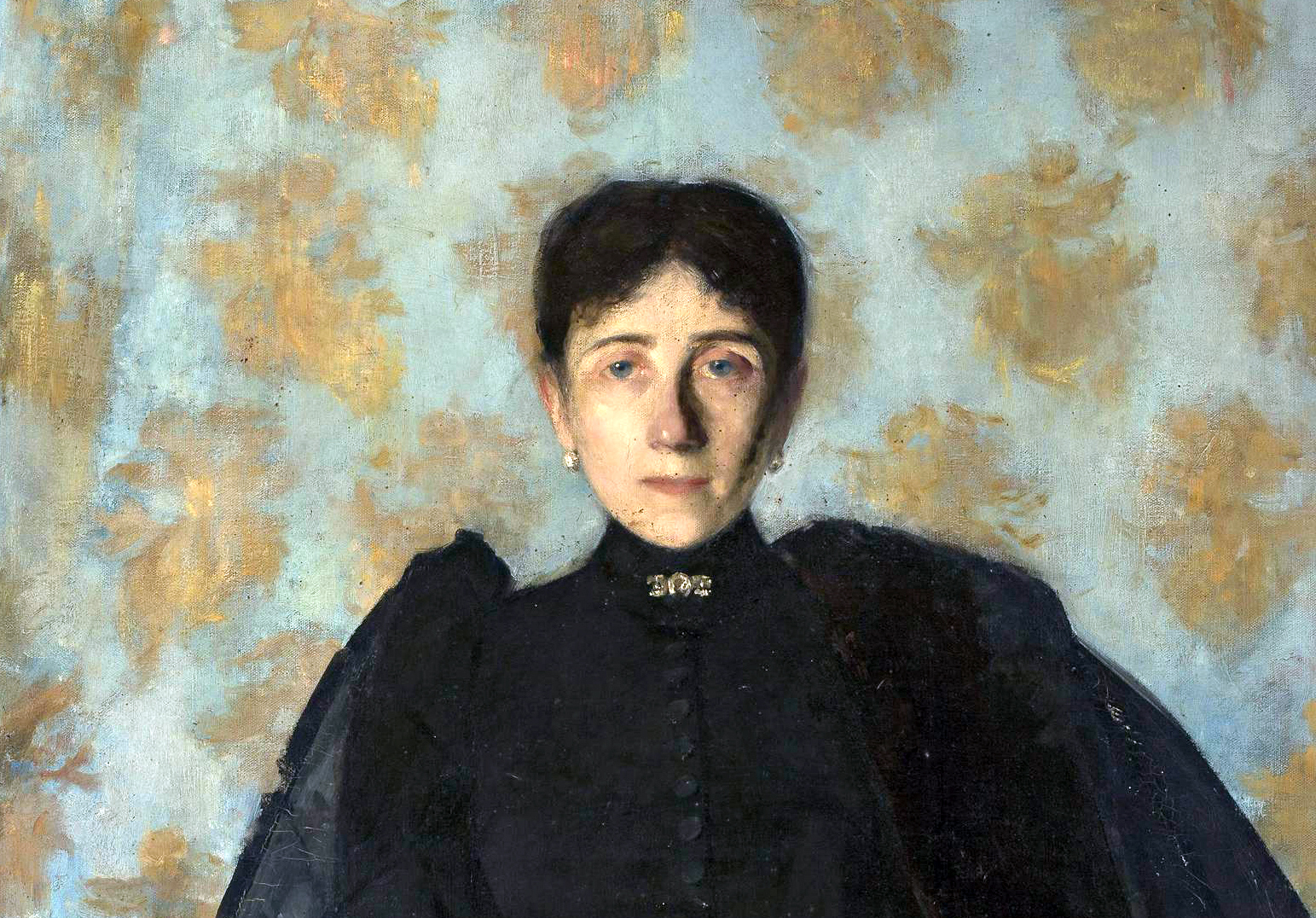 Olga Boznańska (1865-1940) was born in Kraków, Poland and later active in Munich and Paris. Her father, Adam Nowina-Boznański, came from a noble Polish family which cherished traditional values but, in the spirit of 19th-century positivism, he became a train engineer rather than a landowner. Her mother, Eugénie Mondan, came from Valence and was a teacher in the convent school of Premonstratensians in Imbramowice near Kraków.

Olga first received drawing lessons from her mother. Her teachers in Kraków included Kazimierz Pochwalski, an academic portrait painter at the Viennese court, and the more realist-inclined Antoni Piotrowski, draughtsman-correspondent of the Serbo-Bulgarian war.

In 1884-85 Boznańska attended Adrian Baraniecki's Higher Courses for Women at the Technical and Industrial Museum in Kraków, before she travelled to Munich to continue her artistic education, in the studios of Carl Kricheldorf and Wilhelma Dürr (Munich Academy did not admit women at that time). 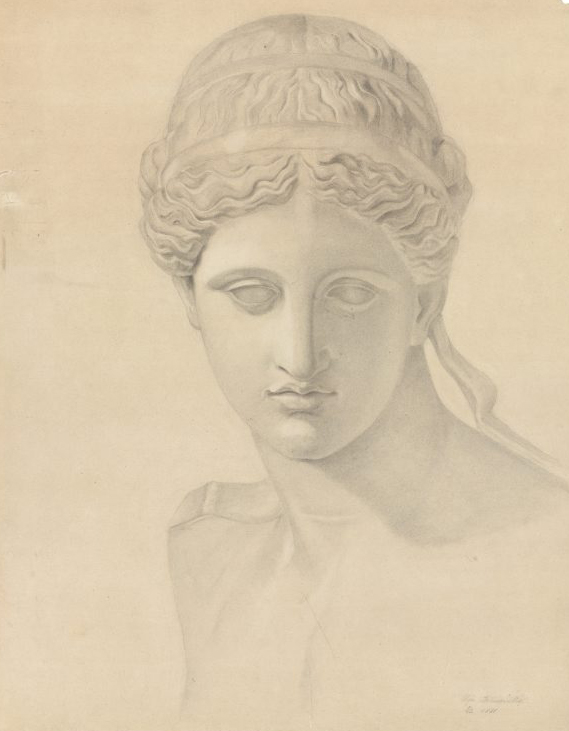 Study of an antique bust, an outline from a graphic pattern, 1881.
Olga Boznańska. Muzeum Narodowe w Warszawie. In copyright.

In Munich, Olga found herself in the middle of a great artistic capital still enjoying the patronage of Ludwig II of Bavaria. She had close contacts both with the established Polish Munich school (especially Józef Brandt and Alfred Wierusz-Kowalski) as well as young Polish and German artists like Wacław Szymanowski, Samuel Hirszenberg, Hedwig Weiss and many others). Brandt was her mentor and he introduced her to the workings of the art world, from which she would soon profit.

Olga quickly realised the importance of appearing in international exhibitions to which she would later send many works. But more importantly, Munich formed her as an artist and made her realise that if she was to succeed, she had to devote herself entirely to art and find her own artistic idiom.

Although she had been exhibiting since 1886, it was not until she painted the portrait of Paul Nauen in 1893 that she received real recognition. The following year, it brought her a gold medal at the International Exhibition in Vienna. Boznańska was under the influence of German realism although her paintings from that period show an interest in Impressionist technique and slightly less obvious symbolism. 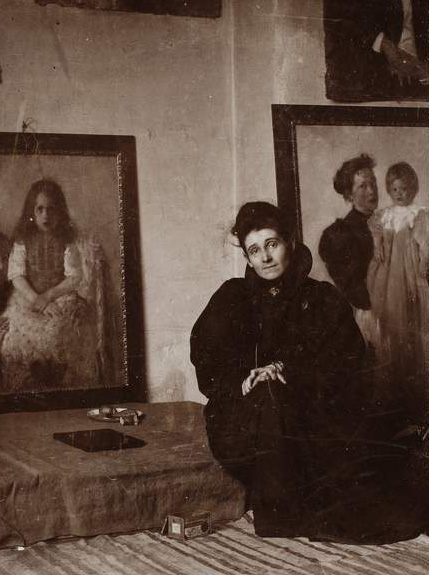 Olga Boznańska in the studio at Georgenstrasse in Munich. On the left is the painting ‘Girl with a nurse’ from around 1896, on the right ‘Mother with child’ from 1893.
Muzeum Narodowe w Warszawie. In copyright.

In the Orangery (In the Greenhouse) is one of the most important works from Boznańska's Munich period when she often portrayed her friends and other young people. The introduction of adolescence as the main subject of her art was closely linked with the rise of the Symbolism movement in poetry. Boznańska's painting refers unequivocally to one of the most talked about collections of poems from that time, Maurice Materlinck's Les serres chaudes .

The Greenhouse can be interpreted as the symbol of a protective and at the same time oppressive system of upbringing. Boznańska was experimenting with merging the academic precepts she received from her teachers with Impressionist effects. 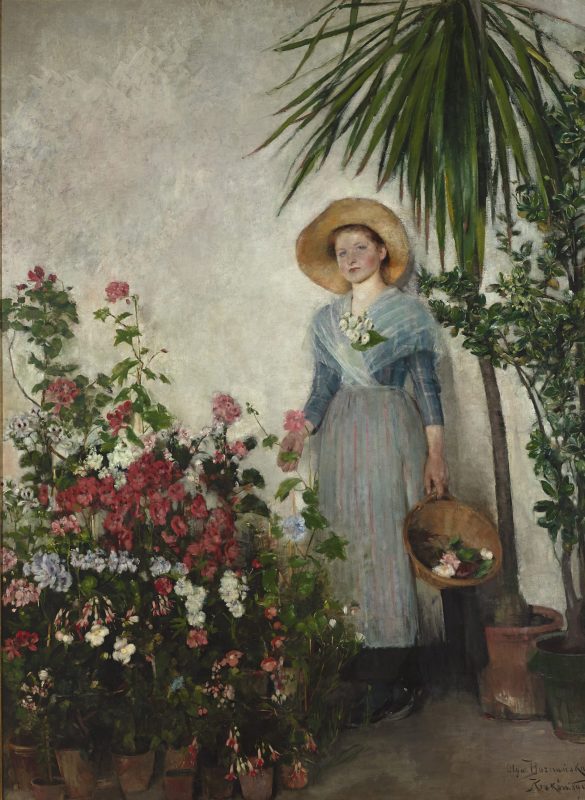 In Munich, she started working as a teacher, and in 1895, she replaced Theodor Hummel in his private school. The next year, she was offered a position of professor at the Art Academy in Kraków which she rejected. She was already a recognised artist and no longer an aspiring art student. The Berlin magazine Bazar nominated her as one of the 12 best European women artists. Having visited Paris and kept in touch with her French family, she decided to settle there permanently in 1898. 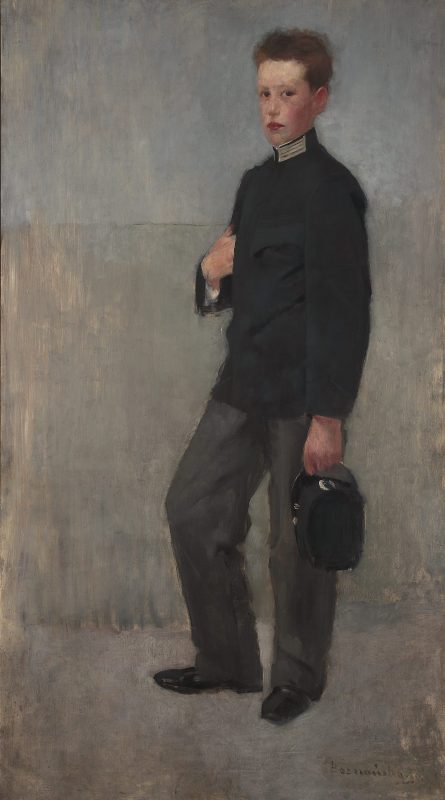 She was also very much interested in the Old Masters. Alte Pinakothek was one of her favourite places in Munich, and Diego Velázquez was her favourite painter, whose technique she tried to absorb. Portrait of a Boy in His Gymnasium Uniform (seen above) shows this influence as well as that of Whistler, who at that time was elected member of Munich Academy.

Boznańska's aesthetic was influenced by artistic ideas current around 1900 and espoused by Whistler in his famous ‘Ten O'Clock’ lecture. Colour and form were the key elements painters could use to create artworks analogous to musical compositions. The influence of Whistler and Japonism can clearly be seen in Olga's Japanese Girl from 1889. 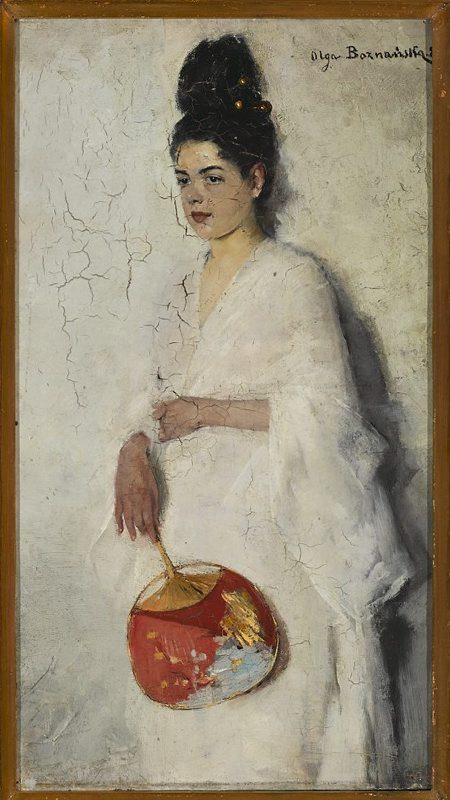 Boznańska was acquiring a following as a gifted portrait painter with a personal and inimitable style. Her portraits were compared to old frescoes or antique tapestries. Her exceptional ability to create psychological likenesses of her models as well as a firm resolve not to flatter the sitter won her recognition in Paris. Two of her portraits were purchased by the French state, which was exceptional.

Art historian Jan Cavanaugh has highlighted Boznańska's subtle colourism and sensitivity to expression, and wrote the following about Portrait of Anna Sariusz-Zaleska:

‘Though the grey of the landscape painter's eyes almost blends with the pale flesh tone of the face, her gaze is intense and penetrating. The concentration of psychic force in her face is emphasized further by the isolation of the head against the dark background…’ 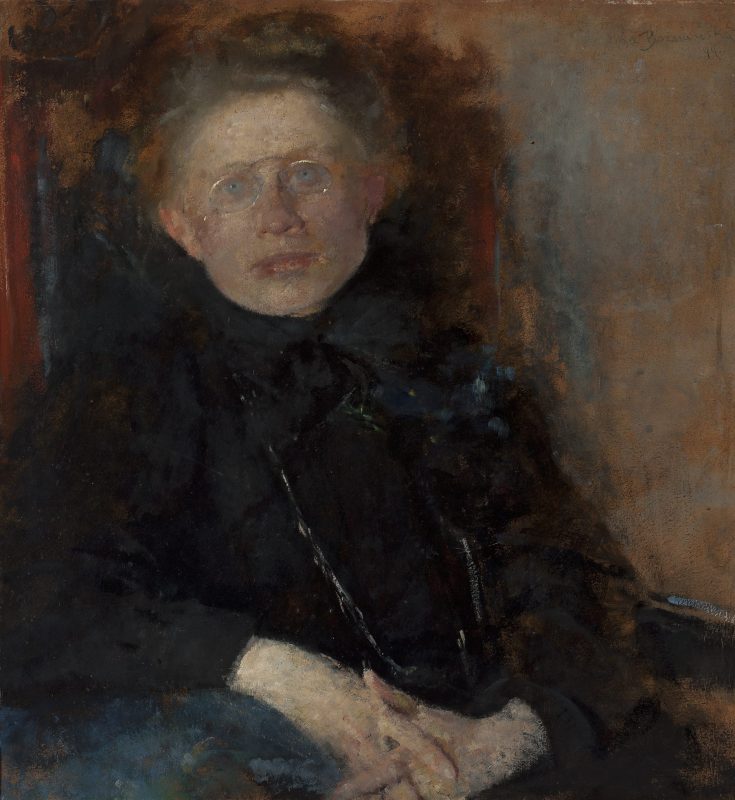 Boznańska's uncompromising attitude towards sitters sometimes put her in trouble with her clients, unhappy about the prolonged sessions (she always took her time when it came to painting), but it also won her the admiration of connoisseurs, intellectuals and other artists. Boznańska painted many insightful portraits of the European intelligentsia from the beginning of the 20th century. Among her models were: Henryk Sienkiewicz, Émile Verhaeren, Artur Rubinstein to name a few.

Indifferent to new trends in art, Olga withdrew more and more into her studio. It became one of the places to visit in Paris for Poles and Americans, who often became her students. Boznańska was one of key figures in Polish artistic circles in Paris during the 1920s and 30s.

Her art found official recognition just before her death – in 1937 Boznańska was awarded the Grand Prix at the Exposition Internationale des Arts et Techniques dans la Vie Moderne and in 1938 she enjoyed success at the Venice Biennale.