The Belgian Exodus of World War One

Over a million Belgian refugees and thousands of British soldiers fled to the neutral Netherlands.

Today, the global refugee crisis is a hot topic, all over the news and debated about in society. What is to be changed about the current situation? Who is supposed to do what and when? It may be considered a problem right now, but in fact, Europe faced the same problem with the advent of the First World War, more than 100 years ago.

July 1914: World War One started and Europe changed rapidly. Many European countries were invaded by the Germans and there was no stopping it. Belgium in particular soon became the main battlefield of this war. The fortress of Liege fell rapidly. Under command of the highest naval officer in rank Winston Churchill, Great Britain sent troops to prevent Antwerp from also falling into German hands. Despite all efforts, Antwerp did not hold up against the enemy. Over a million Belgian refugees and thousands of British soldiers, therefore, fled to the neutral Netherlands. The Belgian Exodus was undeniable. 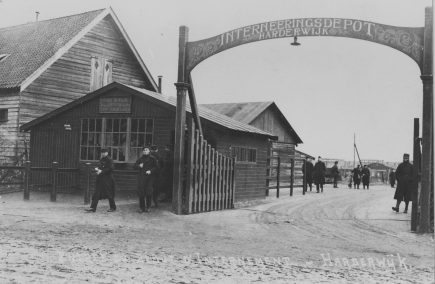 Most of the refugee civilians returned to Belgium after a year. The militaries who fled their country were interned in Dutch camps. They were to be disarmed immediately. Every measure was taken to prevent further fighting on neutral grounds. Amongst other cities, the Dutch town of Harderwijk tripled in its number of citizens. 13.000 Belgians were interned in a designated camp where they would stay for the remainder of the war. In the city of Groningen, the same internment procedure took place for soldiers of Churchill’s Little Army, who came to save Antwerp earlier. Daily life in the camps of Harderwijk and Groningen was at first uncomfortable, lacking sufficient health care and circumstances caused much boredom. Yet slowly, situations for the interned soldiers improved. The camps became proper villages, with different types of facilities popping up. In Harderwijk, a hospital, an English style tea-room and a school to battle illiteracy were built. 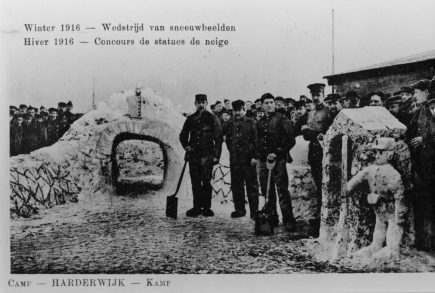 Church, cinema and theatre were actively visited by residents of both camps. A friture providing with French fries was widely enjoyed by the Belgians. Sports events and competitions were held throughout the year, with cycling tournaments and a contest about who could make the best snow sculpture. Even a bear fight, watched by a large audience, took place once, though the exact details remain unknown. 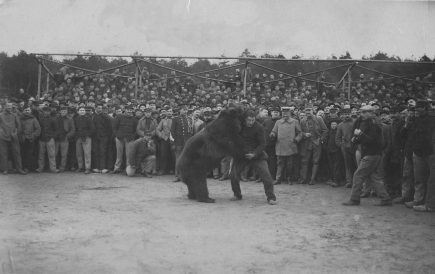 _In the Internment Camp soldiers in uniform and refugees are watching a man who is fighting with a big bear. _ Europeana 1914-1918 / Stadsmuseum Harderwijk, CC BY

Unskilled labour at nearby farms was eventually allowed as well, some of the internees were even sent to the southern province of Limburg to work in the coal mines. The missing of loved ones was hard for many. A cross-European mail system was soon set up, which enabled the interned to send letters and postcards home. A necessity for most, since relationships with the locals were not always as good as one might hope for. 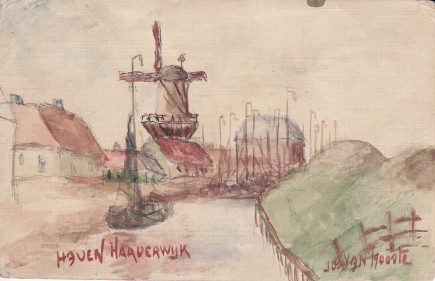 Today, a hundred years after World War One, the well known or rather much-discussed phenomenon of refugees scattered across Europe shows many similarities to the past. Will we continue to set borders on our hospitality and give in to fear? Or are we going to care and help these people out of their misery? In the end, we might have more in common than meets the eye. This story is one of many. Certainly not easily talked about and faced with a risk of becoming a victim to collective amnesia. Nowadays - in hindsight in Belgium, the refugees of Harderwijk are often looked at as deserters, who abandoned their country when situations got tough. In Groningen and Harderwijk, the camps were taken down completely a few years after the war. Other camps remained in place and were used again during the Second World War. Lest we forget, a phrase commonly heard in times of commemorating the First World War. We surely must not forget what happened on the battlefields and in major geopolitical spheres. When this all ended, however, communities were thoroughly devastated. For them, the war would continue for years to come. 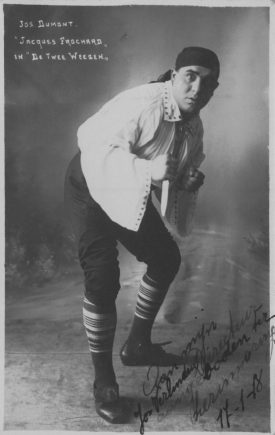 We should continue to tell and remember the personal stories of individuals from these communities. Emphasizing their thoughts, emotions, day to day activities and heartache into the bigger picture. These people influence greatly our perceptions of long gone times and enable us to see the context. They guide us in our approach to refugees now, because they were in a similar situation then. They shape us in our understanding and help us set sail for the future. Knowing where we are going, because we know where we come from. In addition to this blog, explore a gallery with those and other photos of Belgian World War I refugees in the Netherlands in Europeana Collections.