Do we know what it was?

How do we know what Europe’s first printed book was? Until the 18th century this question was open to speculation.15th-century printed books usually have no title page and do not always give the printer’s name.

A reliable historical source from 1499, the Cologne ‘Cronica’, had told of the Gutenberg Bibles, however, their locations were either unknown or they were undated and therefore not credible. Around 25 copies of the first Bible printed in two columns with 42 lines per page were identified during the course of the 18th century. The name of the printer, Johannes Gutenberg, does not appear in any of them. Today we know of 49 of the 180 originally printed 42-line Bibles. Of these 21 are complete.

(Re)discovery of the Gutenberg Bible in Berlin

What happened? Christoph Hendreich (1630-1702), head librarian of Berlin’s Electoral Library, discovered a two-volume Latin Bible in folio format in the library’s collections. It was printed on vellum in a gothic font known as black letter. Hendreich linked his find to the 1499 Cologne ‘Cronica’. 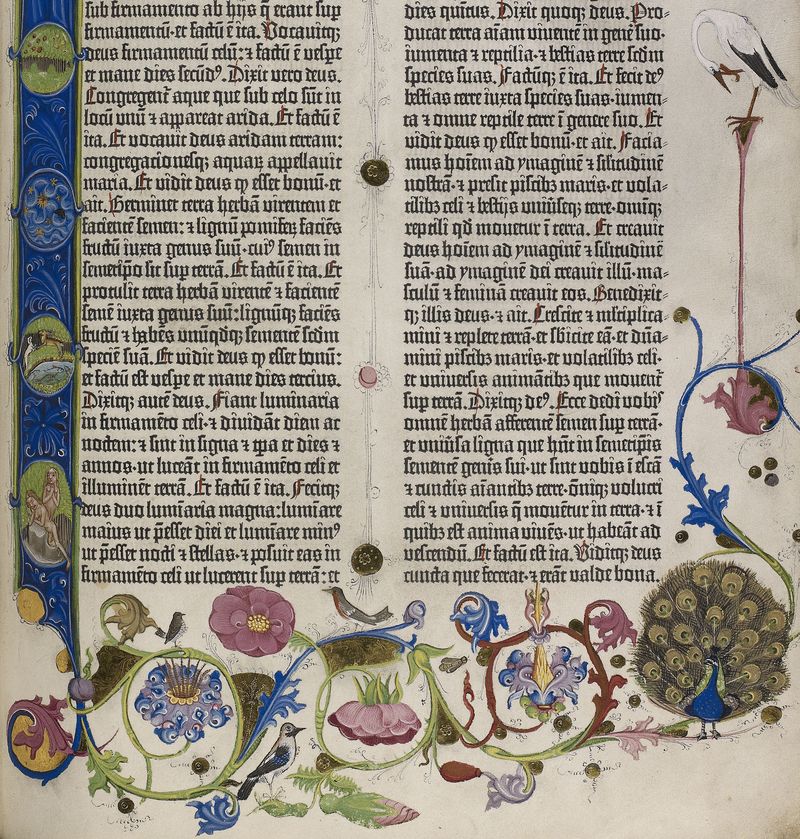 However, his discovery remained a hidden gem until 1760 when the scholar Karl Conrad Oelrich published a facsimile of an extract from the Bible. This dramatically changed the situation: scholars used Oelrich’s facsimile to identify other copies of the Gutenberg Bible from the same edition. This copy is still preserved in the Berlin State Library.

The Gutenberg Bible was produced in Mainz in 1455. It is the first book in Europe to be printed using moveable type: a system of printing that uses individual units of letters and punctuation marks. A mixture of lamp soot, varnish and egg white was used for ink. The text was printed either on vellum, i.e. parchment, or on paper. Vellum was more durable and thicker but also more expensive.

Following the manuscript tradition, copies of the Gutenberg Bible were normally decorated at the instruction of their purchasers, mostly monastic houses. 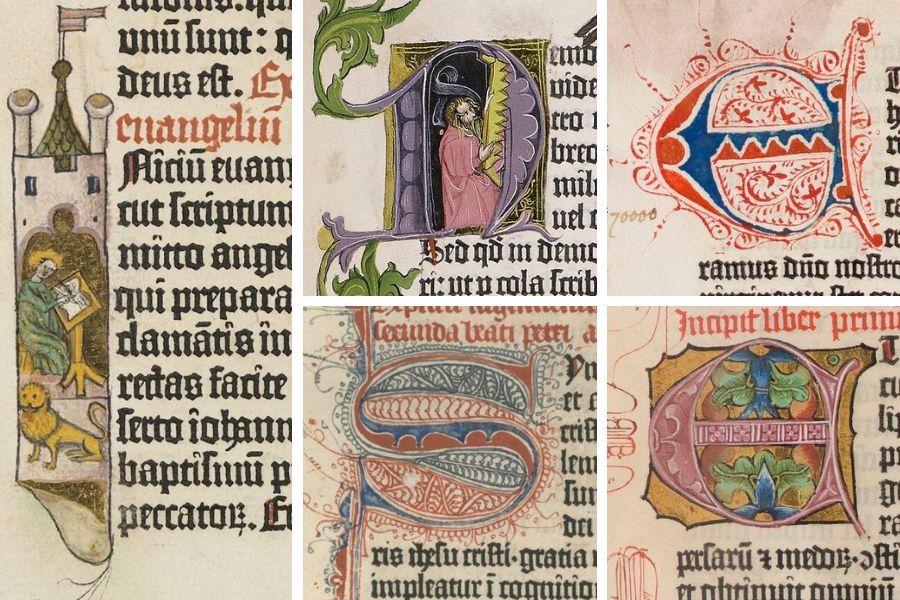 The vellum copy at the Bibliothèque nationale de France has particularly impressive illuminations: spectacular marginal decorations on two pages and a huge variety of illuminated first letters or initials.The illuminations correlate with those in a model book (Musterbuch) for illuminators that was in use at the time. The borders resemble others that were in circulation in the same region and around the same time as the Gutenberg Bible. 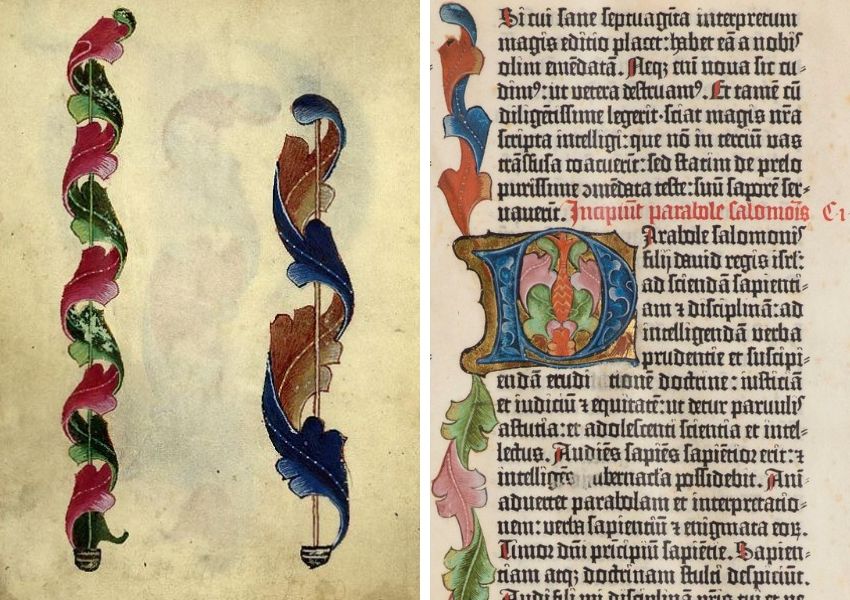 The Göttingen Model Book (Staats- und Universitätsbibliothek Göttingen, f. 11v) on the left shows examples of acanthus leaf borders in different colour combinations that are very similar in style to the marginal decoration in the BnF vellum copy of the Gutenberg Bible (vol. 3 f. 1, right). Other motifs found in the Musterbuch are also repeated in various illuminated initials throughout this copy. Bibliothèque nationale de France, No Copyright – Other Known Legal Restrictions

The paper copy at the National Library of Scotland has fewer illuminations; they are in gold and colour and originate in Germany, possibly at Erfurt. The Bible has marginal notes in a continental hand. It probably remained on the Continent until it came into the possession of David Steuart (1747-1824), the former Lord Provost of Edinburgh, in 1796. He sold it to the Advocates Library, the National Library’s predecessor, for 150 guineas. 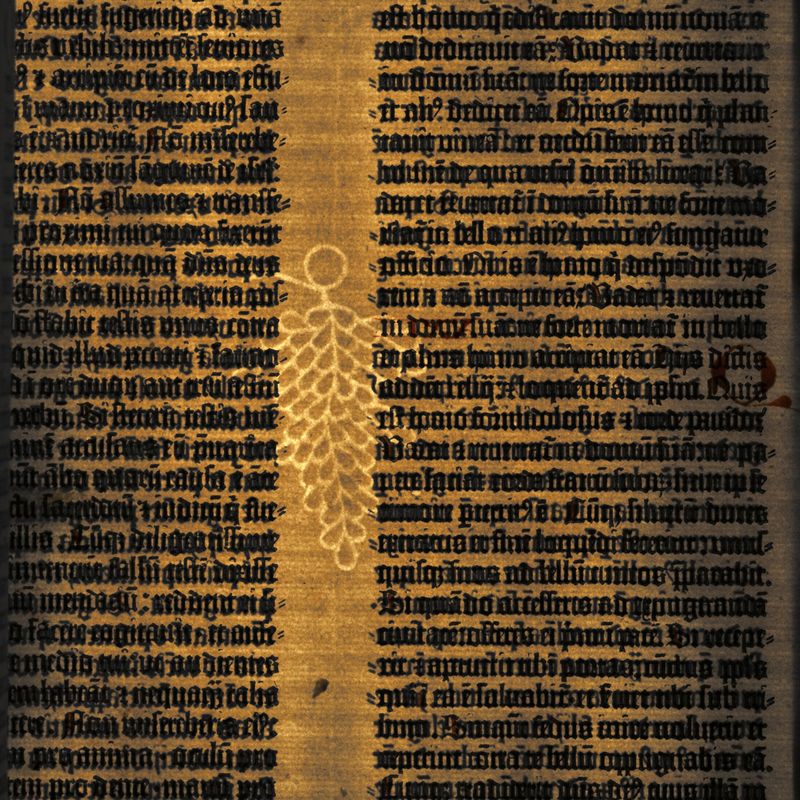 This image shows the watermark on the page (volume 1 folio 94): this is the bunch of grapes watermark, one of three used by Gutenberg. National Library of Scotland, vol. 1 f. 94, CC BY

The only other book Johannes Gutenberg seems to have printed was a schoolbook: the Latin grammar by Donatus. The printing process with movable type pioneered by him was soon taken up by others. By the end of the 15th century, printing presses had been established in more than 250 towns and cities across Europe.

*The blog post is a part of the Rise of Literacy project, where we take you on an exploration of literacy in Europe thanks to the digital preservation of precious textual works from collections across the continent. * Further reading: Learn more about the National Library of France’s two Gutenberg Bibles (in French) and about the global spread of printing.