Boy Scouts of Romania on the Eastern Front

At the Europeana 1914-1918 family history roadshow in Bucharest, Romania, we met one family historian, Alin Dimancescu, who has been building up an online archive of his family's story. We are delighted to say that he decided to share some of that story with Europeana. 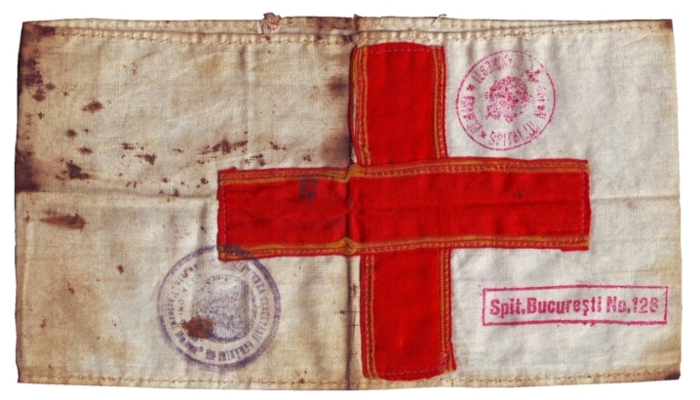 This image shows a red cross banderol imprinted with stamps from a Bucharest Hospital and the Romanian Scouts Association, dating from 1916.

Alin Dimancescu's grandfather, Ioan Dimancescu, is one of the unknown heroes who made modern Romania. Aged 15, together with his elder brother Dimitrie, he set up the first scout patrol in Romania (August 1913). Romania entered the First World War in August 1916. Ioan participated in various scout missions, including transporting and treating wounded soldiers.

When the Royal Court, government and all the troops retreated to Moldavia, Ioan left his home and volunteered as a student at the infantry officer’s school. After a very intense training course he graduated in March 1917 and quickly became a second lieutenant.

In August 1917, rejoining his brother Dimitrie, Ioan took part in a very bloody and violent series of battles.  Of the 135 soldiers in his company, 121 were seriously injured or died, the remaining 14 were slightly wounded. On 24 March 1919, Ioan was awarded with the British War Medal by King Ferdinand I of Romania. 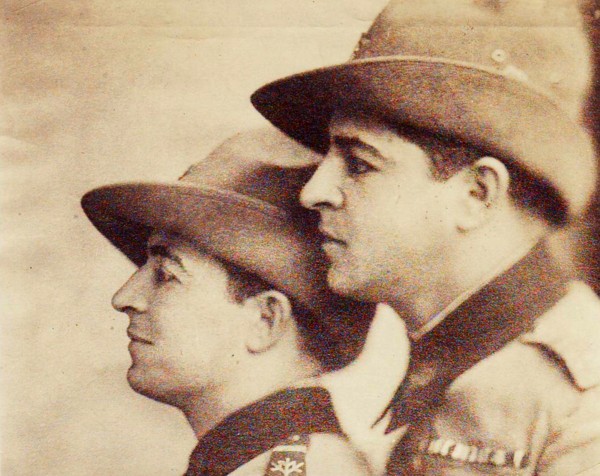 Ioan Dimancescu and his brother - Dimitrie, 1919

Because he has never met his grandfather (who died in 1951), Alin has always been intrigued by his father's stories of him and continued to study the family archive, consulting various sources.  Gradually, he started to feel responsible not only for his family stories, but also for other First World War episodes and lesser known heroes.

And now Alin continues to engage with that period from the position of a Romanian Scouting enthusiast and biographer. The items that Alin has shared with us relate to medical boy scouts in the First World War and include an audio recording of Constantin Sapatino, talking in 1993 about his time as a Romanian scout in 1916-1918.

Alin describes Sapatino as a war hero. At just 13 years old, he was a volunteer ambulance driver, having replaced the driver who died from typhus.

In the recording, Sapatino says, 'My first contact with the horrors of the war was when a zeppelin dropped a bomb on Covaci Street, leaving many dead and wounded. As a boy scout, I helped carry the wounded and we stayed at their disposal the whole time they were hospitalised.' The war was difficult for Romania as its armies were engaged on two fronts - the Germans attacked from Transylvania in the north, whilst the south was under attach from both German and Bulgarian  forces. The Sapatino family fled to Moldavia. Constantin was assigned to Harlau hospital (in Iasi county) which was full of Romanian soldiers. Constantin assisted where he could but it was horrible, he says. He assisted in amputations and, to counter lice infestations, he covered his arms, legs and wrists in cotton wool soaked in camphor oil. When the ambulance driver died, Constantin volunteered to take over and was given the chance, despite his young age. He was grateful to be away from the hospital and had different problems to deal with, such as sharing the same roads with horse carts - farm horses weren't used to see ambulances, or 'iron monsters' as Constantin called them. Explore all of Alin's contributions to Europeana 1914-1918

Congratulations to Alin who is, we hope, an inspiration to budding family historians all across Europe. He has just signed a publishing contract for some of the stories of his 84-year-old father's memories of the '30s and '40s. You can read more of his family history on the following blogs: The Story of a Boy Scout (the biography of Alin’s grandfather – Ioan Dimancescu): http://povesteaunuicercetas.blogspot.com/ (1916-1919 war episodes) The Journal of a Boy Scout (1915-1916): http://jurnaldecercetas.blogspot.com/ Memories from Radu Dimancescu (Alin's father) from the '30s-'40s: http://bonaparte-si-domeniilor.blogspot.com and http://balcic-si-bran.blogspot.com/ and http://viaradalicella.blogspot.com/