A path to literacy

The role of the Catechism in learning to read

For Protestant and Catholic communities of the past, learning the basics of faith and the basics of reading went quite naturally hand in hand. But were all early catechisms necessarily intended as reading primers?

Children's Education: a Point of Contention between Catholics and Protestants

For Europeans at the start of the Early Modern Period, knowledge of Christian doctrines was essential. When the time came to learn to read, it was only natural to begin with prayers or basic religious instruction. With the development of the printing press, small booklets mixing alphabets, syllabaries and prayers became popular throughout Europe. In 1529, the publication of Martin Luther's ‘Small Catechism’ marked the official birth of a format that would have a bright future: a text organised as a series of questions and answers. After a period of hesitation, Catholics took up the practice of using a catechism as well.

The goal was to teach all Christians, even the most humble, whenever possible in their native languages. This explains why some of the earliest texts in many European languages are catechisms. For example, the first book printed in Lithuanian was a catechism published in 1547 in Königsberg (modern-day Kaliningrad, Russia). Nineteenth-century scholars sought out these modest-looking books with great enthusiasm.

An Instructor's Book or a Primer?

Alphabet books containing prayers were quite clearly meant to be placed in a child's hands, but the role of catechisms themselves in learning to read is open to discussion. In Catholic countries, bishops had made a point of publishing their own catechisms since the 17th century, sometimes drawing on earlier versions that had proven effective and adapting them to local circumstances. These were instructor's books first and foremost, and they reflect the oral nature of teaching. They also contain many practical tips on how to teach. 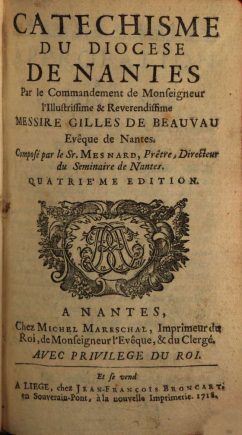 Catéchisme du diocèse de Nantes', 1718. Jean De La Noë-Mesnard, author of this catechism that was first printed in 1689, recommends using a long rod “to admonish the children seated farthest away but not to strike them” with it! Bayerische Staatsbibliothek, No Copyright - Non-Commercial Use Only The picture is different for Protestants, among whom religious education more often took place in a family setting. There are many examples of catechisms that include alphabets and syllabaries, a sign of greater familiarity with books, such as this syllabary in Icelandic that was printed together with Luther's ‘Small Catechism' in 1695. They show the concern with personally appropriating the doctrines of the faith usually associated with the Reformation.

An Apparent Increase in Production

From the beginning of the 19th century until the time when religion became less prominent in primary education, a wide variety of booklets were produced that included a mix of alphabets, syllabaries, prayers and catechisms.

Should this be seen as a consequence of progress in education? It's best to be cautious in drawing conclusions. In reality, this impression of increasing production is partly an illusion. Many booklets published in the early centuries of the printing press were fragile and neglected, and have since been lost. This is not the case with more scholarly books, such as the Roman Catechism (1566) or, to give a Protestant example, the Heidelberg Catechism (1563), of which many copies can still be found in European libraries today.