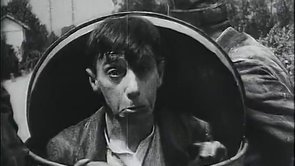 The Fear of Zeppelins

Cretinetti is about to get married and he could not be any happier and more in love with his Junoesque consort. But just on the day of his wedding, he reads a notice on the wall explaining how to behave in the case of an enemy air raid. The fear that grips him makes him even too literal in implementing safety indications, causing trouble and accidents that will not only stop him from enjoying his first marital night, but will even cause the collapse of the whole house. In the end, the gendarmes go to him with a conscription notice and take him away under coercion, under the appalled gaze of his new bride.
André Deed, who played Cretinetti, was one of the most representative comic actors within the lavish Italian genre production. His speciality was creating continually different situations in which to vent his anarchic and destructive energy. In The Fear of Zeppeling a finale with an unusually bitter back-flavour is included, in which the newly-wed are separated by war the day after their wedding. The video is a copy from the film print restored in 2005 in collaboration with the Cineteca di Bologna and the National Cinema Museum in Turin: 35mm, positive, polyester, 336 m., black and white, Italian intertitles, silent. The restoration was carried out at L’Immagine Ritrovata laboratory.