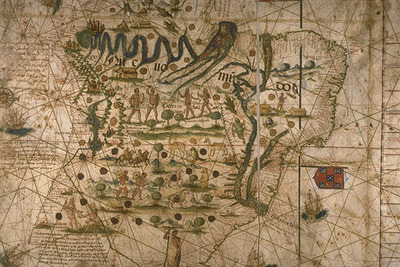 The large hand-drawn map of the world by Sancho Gutiérrez (1516-1580) is a copy of a formerly top secret and constantly updated document from the Casa de la Contradación (Spanish colonial administrative office). It was designed in the style of late medieval nautical charts (portulan charts), although the interior of the continents and isles are full of numerous toponyms and geographical details such as towns, rivers and mountains. The map also shows botanical, zoological and anthropological depictions as well as phantastic creatures. Textual inserts contain detailed information and source references such as reports of explorations and older geographical literature.<BR><BR>The section on display shows the most interesting area of the map, a part of South America. Traditional knowledge from the Casa de la Contradación overlaps equal to more up to date information: the course of the Amazon and the South American west coast are drawn in two versions. This map of the world was drawn for the Emperor Charles V and well illustrates the comprehensive importance and role of old maps: firstly, the collection and reproduction in text and pictures of geographical facts and traditions - including mythological conceptions - , secondly, the map as a valuable document with which to demonstrate the claim for power and dominion.