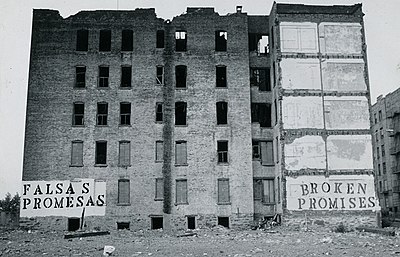 John Fekner (born in 1950 New York City) is an innovative multidisciplinary artist who created hundreds of environmental and conceptual outdoor works consisting of stenciled words, symbols, dates and icons spray painted in New York, Sweden, Canada, England and Germany in the 1970s and 1980s. A seminal figure in the Street Art movement, Fekner participated in recent urban art exhibitions such as Wooster Collective's 11 Spring Street Project in 2006 and in "Art in the Streets" at The Museum of Contemporary Art, Los Angeles in 2011. Working with Don Leicht, their project entitled "The Stanley Cup is missing" was part of the annual BLK River street art festival in Vienna, Austria. Art writer Lucy R. Lippard writes, "Fekner does in public what a lot of art world artists don’t even do in galleries: he dispels ambiguity by naming his visions, his viewpoint."In 1968, Fekner painted the words Itchycoo Park in large white letters on an empty building in Gorman Park, New York. In 1978 he curated the Detective Show at the same outdoor location in Queens which included the words street museum on the invitational card. Fekner developed a philosophy of ‘reducing the value of an art object to that of a shared visual experience for the public’ through stencil graffiti that interacted, involved and connected with the urban populace across the five boroughs of New York.In reaction to the desolation of the abandoned burnt-out buildings of the South Bronx, Fekner stenciled Last Hope in large letters above one crumbling structure so that every time you passed it you couldn’t block it out of your vision. Now you know you can’t change the world, but you can’t sit back and watch it implode either, so you’ll do your part, have your own little victory, and so will the next guy and the next, and maybe things will start to change.Fekner's output includes paintings, cast paper reliefs, video, audio and performance works, sculpture, photography and computer-generated work. Fekner creates multiple versions of work in entirely different media and will use whatever means are necessary to communicate a vision or message, and whose work changes as that vision expands. Throughout his entire career in the arts, Fekner has made a commitment within his work by consistently addressing issues that demonstrate an interest involving concepts of perception and transformation, as well as specific environmental and sociological concerns such as urban decay, greed, chemical pollutants, mass media and Native American Indians. Fekner's stencil Wheels Over Indian Trails greeted motorists and international travelers arriving in New York City at the Pulaski Bridge Queens Midtown Tunnel from 1979 to 1990. The message remained untouched for eleven years, until Earth Day 1990, when Mr. Fekner, feeling the piece had run its course, painted over it.