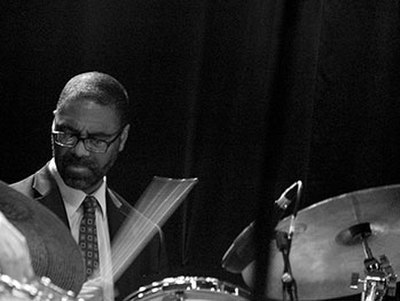 Dennis Mackrel (born April 3, 1962, in Omaha, Nebraska) is an American jazz drummer, composer, and arranger. He is also known for his work as a bandleader and music educator. He is most notable for his associations with the Vanguard Jazz Orchestra and the Count Basie Orchestra.The son of two jazz enthusiasts, Mackrel started playing the drums at age two and began his professional career playing at a community theater at age ten. He attended the University of Nevada, Las Vegas, studying jazz under Frank Gagliardi, during which time he performed in venues such as the Imperial Palace and the Tropicana. In 1981, Mackrel moved to New York City and became a drummer with a Broadway theatre orchestra. Two years later on the personal recommendation of singer Joe Williams, Mackrel joined the Count Basie Orchestra where he would remain until December 1987. He was the last drummer of that orchestra to be personally hired by Count Basie himself.After leaving the Basie Orchestra, Mackrel frequently performed as a substitute drummer in the Mel Lewis Jazz Orchestra. Shortly before Lewis died in February 1990, he announced that he wanted Mackrel to take his place as the regular drummer for the band, which soon changed its name to the Vanguard Jazz Orchestra.Mackrel later became the drummer for many other big bands and small groups including the Hank Jones Trio, the American Jazz Orchestra, the Carla Bley Big Band, Buck Clayton's Swing Band, the George Shearing Quintet and the Dizzy Gillespie All Star Big Band. In September 2010, he returned to the Count Basie Orchestra after the retirement of trombonist Bill Hughes. and served as the orchestra's leader and chief conductor until 2013. As a composer and arranger, Mackrel has received a Grant for Composition from the National Endowment for the Arts (1983). He has written pieces for McCoy Tyner (on the Grammy-winning The Turning Point and Journey), the WDR Radio Big Band of Cologne, the Klüvers Big Band of Denmark, the RIAS Big Band of Berlin. the United States Military Academy at West Point's Jazz Knights Big Band, the Columbus Jazz Orchestra and the Temple University Jazz Ensemble.As an experienced jazz educator who conducts master classes, seminars and workshops throughout Europe, Asia, Canada and the United States, Mackrel has performed with the jazz ensembles of numerous colleges and high schools including the Eastman School of Music, Slippery Rock University, the University of Wisconsin, Oshkosh, Northern Illinois University, Cincinnati Conservatory of Music, the University of Minnesota, Morris, New Trier High School, Sun Prairie High School, Western Illinois University, Southern Utah University, the Royal Conservatory of Music in Aarhus, Denmark, the University of Florida, Miami, the University of Nevada, Las Vegas, Elmhurst College, Michigan State University and many others.