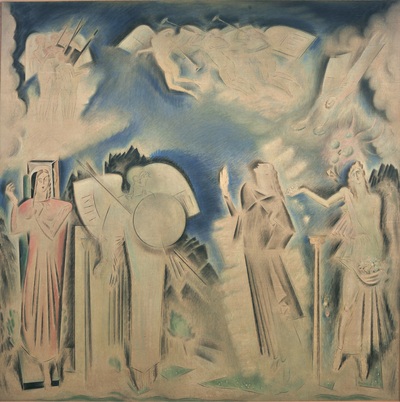 The Apotheosis of Athanasios Diakos

We have already met Konstantinos Parthenis in his first creative period, that of outdoor painting. After 1920, he turned towards anthropocentric, symbolist and allegorical subjects. With its powerful stylisation and light tonal palette, which makes his nimble, tall and thin figures seem like dreamlike projections on the canvas screen, Parthenis' mature style had fully developed by this period. His works painted in this style seem like poetic reverie.
In the Thirties, certainly under conscious or unconscious influence by the predilections of that generation, Parthenis' style changed. The curvilinear forms noted earlier now gave their place to a linear, angular writing, which often seemed to be supported by drawing instruments, such as the ruler and compass. Another notable change, probably related to Kontoglou's return to the values of Byzantine art, was that the fresh, jubilant spring colours of the previous period were now replaced by the Byzantine palette and its earthy colours – brown, grey, dark blue. A common element with the previous period is the light hand, almost not human, which allows the canvas to show through and transforms the figures into dream-like fantasies projected on the painted surface.
Let us now ""read"" this monumental painting, an apotheosis, according to its title, of the great Greek revolutionary hero, Athanassios Diakos, who died a martyr's death, near the Alamana Bridge on April 24, 1821.
The following lines are attributed to him by folk tradition:
Oh, that Death chose to take me now,
when the twigs are in full blossom and the soil is covered with fresh grass.
The artist seems to have had these lines in mind while making this monumental work, one of the crowning masterpieces of modern Greek art. He identified the hero's resurrection and ascension with Christ's Resurrection, both events occurring in the spring, around the month of April. On the left, a haloed figure, an Angel or one of the Myrrhophores, is startled upon discovering the empty tomb of the resurrected hero. In the middle, another angel, wearing a helmet and carrying a spear and shield, reminding us of a Christian goddess Athena, witnesses the miracle. Athanassios Diakos, in a classical chiton, rises in heaven, where he is received by angel musicians, similar to those in Greco's paintings, while others are bringing laurel wreaths in order to crown him. A girl, as if out of Botticelli's ""Spring"", is sprinkling the hero with flowers from her lap. Incense is burning in a tall classical incense burner. The painting elevates the Greek Revolution into the sphere of the ideal world. The idealisation of history is also achieved through the symbols and the iconographical spirituality of the work.
In "The Apotheosis of Athanassios Diakos", various influences, both iconographic and stylistic ones, join and blend: The drawing echoes classical pottery. The hero's resurrection and ascension comes from the related Byzantine iconography. Flora, the personification of Spring in Botticelli's work of the same title, is the iconographical source of the girl on the right.
Greco's tall and slender mannerist figures, as well as his bipartite arrangement of his works in an earthly and heavenly section have inspired the morphology and composition of the Apotheosis. The geometric shapes and broken outlines, where space and form mingle with each other, reveal the Cubist* influence on Parthenis. Moreover, his cerebral, anti-naturalistic colours also originated in Cubism*. This influence was reinforced by the shift towards the Byzantine tradition by the generation of the Thirties.