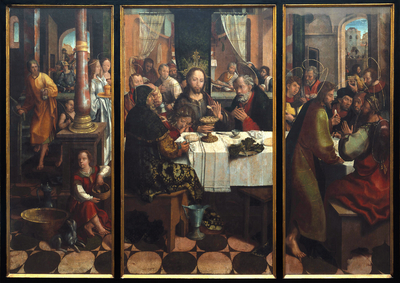 The triptych is from the chapel of Santa Marta of the Episcopal Palace of Fontelo, Viseu. The pictorial techniques of Vasco Fernandes are identifiable: the decentralisation of the formal nuclei and their ordering in successive planes unified by the distribution of light; the accuracy of the volumetric expression and the shapes; the facial expressions, the meticulousness of the details. This work is important due to the iconographic complexity and the relation between the narrative, which is developed continually, and its tripartite aspect. The Last Supper is represented in the central section: Jesus Christ, who holds the Eucharistic cup, is flanked by St Peter, St John and another apostle. In the left painting, seven apostles gathered around the table in an L-shape, an extension of the central painting, are raising up the Eucharistic host. Judas, in the painting on the right, with the iconographic elements depicting the betrayal (the bag of coins and the yellow clothing), is still in the group. The depictions in this right-hand painting on the right, in addition to Judas and the dog (a symbol of fidelity as the opposite to treason), are unusual. The episode of the washing of the feet is evoked by the presence of a boy with a bowl of water in the foreground, and the two female figures that approach Christ, one of whom holds a little box of perfume, an attribute of Mary Magdalene, alluding to the dichotomy between Profane Love and Sacred Love. The visual identity is created by a continuous wall that separates the background from the foreground. In the central painting, some characters are peeking through from an adjoining section, one of whom is carrying the lamb to the Eucharistic table, just as in the Jewish celebration of Passover. The elements arranged on the table, the bitter herbs and the unleavened bread, allude to the Exodus from Egypt. In the remaining two backgrounds, subsequent scenes of the Passion are evoked (text by Maria João Vilhena).