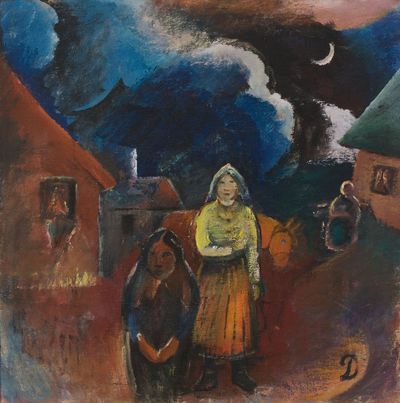 Pranas Domšaitis (Franz Domscheit) is one of the most famous painters of Lithuanian diaspora and arguably the most prominent Lithuanian expressionist. He was born in Lithuania Minor region in Prussia and graduated from the Royal Academy of Fine Arts in Königsberg. As an artist, he was brought up by the cultures of two nations living next to each other - the Germans and the Lithuanians He was well known in Germany after the World War I and in South Africa after the World War II. P. Domšaitis was influenced by modern art trends of the early 20th century, while participating in various exhibitions and having contacts with many famous painters in the important Western European art centres. But in 1937, after having been included, along with Munch, van Gogh, Nolde, Kirchner, Mueller, Dix, and many others, in the notorious exhibition “Entartete 'Kunst'” (“Degenerate 'Art'”, organized by Hitler for the specific purpose of ridiculing Expressionist and other "decadent" art styles), P. Domšaitis' works were removed from all German museums in 1938. In 1949 he emigrated to South Africa. Entering a period of intense creativity, P. Domšaitis became one of the dominant figures in South African art, with exhibitions there and in Rhodesia, the United States, Canada, and Brazil. P. Domšaitis, from childhood maturing in the blend of neighbouring cultures, is a classic artist of the borderlands. He absorbed international influences, yet he maintained a strong national identity. As he noted in one of his letters, “Lithuanian blood does not deceive, just as my paintings are truly Lithuanian.” Picture “Scenery of Lithuanian Village” represents the mature artistic period of P. Domšaitis, which started after the World War I. Desire to express his inner feelings and emotions, inspired by Expressionism, became evident in his artworks. Dramatic mood of the painting brings-up reflections of war, originating from the dreadful fate of homeless refugees. Cold moonlight highlights ominous clouds, as female figures froze in uncertainty. Rich colours and generalised shapes complete the scene of mysterious night.