Mural paintings at the Chapel of Saint Casimir of Vilnius Cathedral 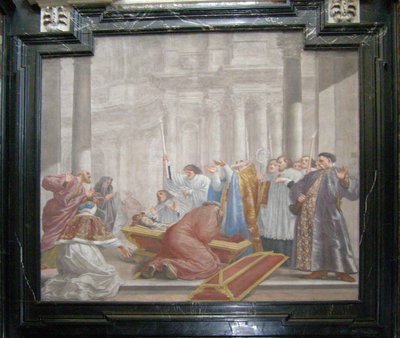 Mural paintings at the Chapel of Saint Casimir of Vilnius Cathedral

The Royal Chapel of St Casimir in Vilnius Cathedral is the masterpiece of Lithuanian Baroque. Beside expressive paintings there are two huge frescoes decorating its eastern and western walls. The mural paintings were created by Michelangelo Palloni, Italian painter who worked in the Polish-Lithuanian Commonwealth from 1674 onward. Building of the Chapel started immediately after prince Casimir was canonized by Pope Clement VIII in 1602. It was built on the initiative of Sigismund III Vasa (1566-1632), King of Poland and Grand Duke of Lithuania, and decorated by famous Italian architects and sculptors. Unfortunately, during the mid-17th century wars with Russia Chapel was badly damaged. In 1692, at the time of restoration funded by Jan Kazimierz Sapieha (1637-1720), Grand Hetman of Lithuania and Voivode of Vilnius, walls of the Chapel were decorated in mural paintings, created by Florentine painter M. Palloni. His artworks are considered among the most valuable examples of Baroque style painting in Lithuania. Frescoes of M. Palloni not only have artistic quality but also attract attention because of their expressive iconography. Fresco “The Opening of the Coffin of St Casimir“ painted on Chapel’s eastern wall depicts story Benedykt Woyna, the Bishop of Vilnius, sent to Rome in 1604. On August 16, 1604, the coffin of St Casimir has been opened. It is told that wonderful smell spread after lid of the coffin was lifted. The body of St Casimir was found miraculously preserved through the period of 120 years. Fresco shows the Saint in long, red robe, decorated with stoat fur, lying in a coffin, with Duke’s crown on the head. It also portrays Benedykt Woyna, the Bishop of Vilnius, participating in the opening of the coffin and praising the God. The Bishop is wearing decorated cope and is looking toward heaven with his hands raised up. Other clergymen stand around, with candles, pastoral and missal in their hands. Kneeling at the head of the Saint is Gregorius Swiecicki, the canon at Vilnius Cathedral chapter, who was entrusted with Casimir’s canonisation process. He is dressed in white surplice and his hands are spread in surprise. On the right side of the image, near the clergy, with the left arm lifted up, stands Jan Kazimierz Sapieha, the Grand Hetman of Lithuania and Voivode of Vilnius. He has not been born yet during the time when the coffin was opened, but is still painted there to honour him as patron of the fresco, noting his piety and respect for St Casimir. Virgin Mary and St Peter, patrons of the Catholic Church, stands on the left side of the coffin dressed in clothes of depicted times. Even further two blurry figures can be seen having conversation. Most likely those two are workers who had opened the coffin. Fresco “Resurrection of Ursula” is painted on the western wall of the Chapel. It depicts the first known miracle of St Casimir. After the death of young girl named Ursula, her father rushed to the coffin of prince Casimir in order to devote her to his mercy and care. Near the remains of prince Casimir the girl was miraculously resurrected. She recovered and stretched her hands to sarcophagus. Clergy, nobles and relatives of the girl, depicted on the right side of the image, were astonished. This reaction is skilfully portrayed in fresco. This artwork helped to promote the cult of St Casimir to pilgrims.