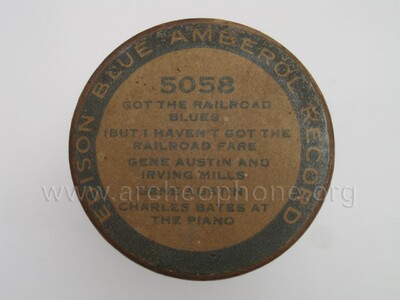 À propos de cet enregistrement, voici le texte lu sur http://www.machine-whisperer.com/music/railroad.html : This record is unusual for Edison and also unusual for Gene Austin, since neither are known for their blues records. Gene Austin's name became synonymous with gentle ballads (such as "Ramona" and "My Blue Heaven") only a couple of years later. But, before "hitting it big" as a crooner, Gene Austin experimented with different styles - for Edison, he recorded Country songs as half of the "Blue Ridge Duo" and this, waxed on September 15 of 1924. It was issued on both cylinder and disc - this is the disc version. Gene claims partial credit for writing this song, shared with music publisher Irving Mills, but it's probable that the song was in fact "borrowed" from an anonymous black performer. The piano player on this record is Charles Bates, who co-wrote the hit song "Hard Hearted Hannah" that same year, but the real highlight of this record is the anonymous harmonica player (possibly George Reneau who also played with Gene on the "Blue Ridge Duo" sides) mimicing a train pulling out of the station and fading into the distance. The recording balance favors the vocal over everything else, putting the sound of the piano just above the surface noise, and this made making noise removal trickier than it would otherwise be. This disc had not been mistreated, however, so the groove noise was quiet - some could be left in without detracting from the music. (Please Note: a CD has been issued on Document Records with this recording on it, but I am uncertain which "take" was used for the reissue. If mine is a different "take," then I will keep it here, but otherwise I will be taking this page off of my site soon.)