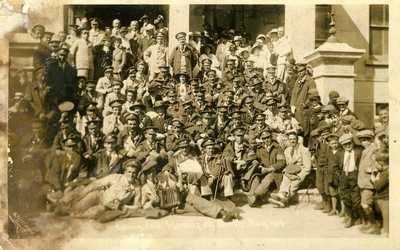 Brother of Caroline Austin, brother-in-law of Thomas Richard Austin. He served with the Leicestershire Regiment, and was awarded Military Medal. Killed July 5th 1917, he is buried at Metz-en Couture Communal Cemetery, Pas de Calais. My grandmother's brother, to whom she sent a card of her and her two children, which was returned with his effects. He is so handsome, cocky, full of life! In the group photo I think it is he, near the back on the left of the column, in a light suit. Editor's Comment: Three single shots and one group photograph of men in Hospital 'Blues' Uniform. Private 15249 Albert George Reed, M.M., 2nd/5th Bn. Leicestershire Regiment, was killed in action 5th July 1917, aged 25. The son of Joseph and Mary Ann Reed, of 61, Rodney St., Swansea, he is buried in Metz-en-Couture Communal Cemetery British Extension.