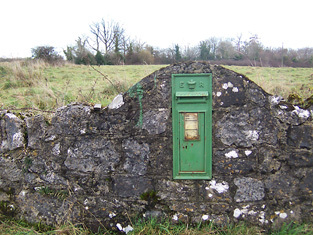 Wall-mounted cast-iron post box, erected between 1901-10, with raised "ER VII" royal cipher. Set into specially constructed section of limestone walling adjacent to Glencarra Crossroads.APPRAISAL:An attractive item of street furniture representing an early-surviving artifact of mass-produced cast-iron ware. The modest design of the box is enhanced by the raised 'ER VII' royal cipher with crown motif, which enlivens the appearance of this otherwise functional object. It was erected during the reign of Edward VII (1901-10). Many pre-independence post boxes were simply painted green and retained their royal insignia but are now becoming an increasingly rare sight and are worthy of retention as historical artifacts.