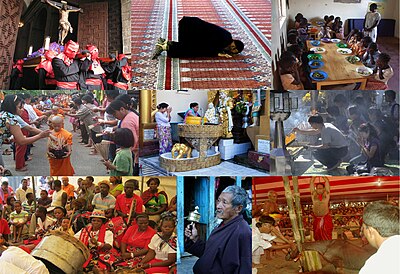 Religion is a set of variously organized beliefs about the relationship between natural and supernatural aspects of reality, and the role of humans in this relationship. While religion is difficult to define, one standard model of religion, used in religious studies courses, was proposed by Clifford Geertz, who simply called it a "cultural system". A critique of Geertz's model by Talal Asad categorized religion as "an anthropological category.". Many religions have narratives, symbols, and sacred histories that are intended to explain the meaning of life and/or to explain the origin of life or the Universe. From their beliefs about the cosmos and human nature, people derive morality, ethics, religious laws or a preferred lifestyle. According to some estimates, there are roughly 4,200 religions in the world.Many religions may have organized behaviors, clergy, a definition of what constitutes adherence or membership, holy places, and scriptures. The practice of a religion may also include rituals, sermons, commemoration or veneration of a deity, gods or goddesses, sacrifices, festivals, feasts, trance, initiations, funerary services, matrimonial services, meditation, prayer, music, art, dance, public service or other aspects of human culture. Religions may also contain mythology.The word religion is sometimes used interchangeably with faith, belief system or sometimes set of duties; however, in the words of Émile Durkheim, religion differs from private belief in that it is "something eminently social". A global 2012 poll reports that 59% of the world's population is religious, and 36% are not religious, including 13% who are atheists, with a 9 percent decrease in religious belief from 2005. On average, women are more religious than men. Some people follow multiple religions or multiple religious principles at the same time, regardless of whether or not the religious principles they follow traditionally allow for syncretism.