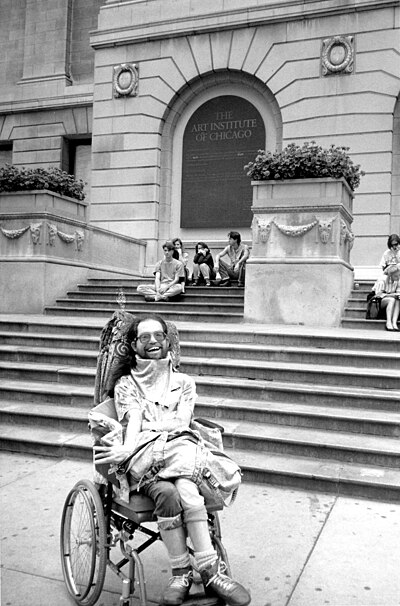 Frank James Moore (June 25, 1946 – October 14, 2013) was an American performance artist, shaman, poet, essayist, painter, musician and Internet/television personality who experimented in art, performance, ritual, and shamanistic teaching since the late 1960s.Moore is perhaps most well known as one of the NEA-funded artists targeted by Jesse Helms and the GAO (General Accounting Office) in the early 90s for doing art that was labeled “obscene". Frank Moore was featured in the 1988 cult film Mondo New York, which chronicled the leading performance artists of that period. He is well known for long (5–48 hours) ritualistic performances with audience participation, nudity, and eroticism. But he has also become well known for his influential writings on performance, art, life, and cultural subversion, for his historic influence on the San Francisco Bay Area music and performance scene, and more recently for his performance/video archive on Vimeo.com that has been viewed by over 7 million people worldwide.Moore coined the word, "eroplay" to describe physical play between adults released from the linear goals of sex and orgasm. He explored this, and similar concepts in performance and ritual as a way for people to connect on a deep human level with each other beyond the social and cultural expectations and limitations, and as a way to melt isolation between people.Moore has been an underground counter-culture hero and artistic inspiration for decades. He was born with cerebral palsy, could not walk or talk, and wrote books, directed plays, directed, acted in and edited films, regularly gave poetry readings, played piano, sang in ensemble music jams, and continued to lead bands in hard core punk clubs up and down the west coast until his death. He also produced a large collection of original oil and digital paintings that have been shown across the United States and in Canada. Moore communicated using a laser-pointer and a board of letters, numbers, and commonly used words.Performance artist Annie Sprinkle considers Moore one of her teachers, and Moore has performed with a host of performance and punk figures of the underground since the 1970s like Barbara Smith, Linda Sibio, The Feederz, and Dirk Dirksen - The Pope of Punk.Frank Moore first came to be known in the 1970s as the creator of the popular cabaret show, the Outrageous Beauty Revue. In the 1980s he became one of the United States' foremost performance artists. In 1992 he was voted Best Performance Artist by the San Francisco Bay Guardian. In the early 1990s he was targeted by Senator Jesse Helms. From 1991 to 1999 Frank Moore published and edited the acclaimed underground zine, The Cherotic (r)Evolutionary.In addition to his books, Cherotic Magic, Art of a Shaman, Chapped Lap,Skin Passion and numerous other self-published pieces, Frank Moore has been widely published in various art and other periodicals. In artist Pamela Kay Walker's book, Moving Over the Edge, Moore is one of the artists featured as having "greatly impacted me and many people through their artistic expression and their lives."Frank Moore’s award-winning video works have shown throughout the U.S. and Canada, and since 2001 Moore has been producing shows for Berkeley's public access channel, Berkeley Community Media, Channel 28. His shows continue to play weekly, throughout the week.In 2011, Frank launched his online performance and video retrospective on Vimeo. At the same time he created the EROART group featuring videos by eroart artists from all over the world.Frank Moore's Web of All Possibilities features a growing archive of his audio, video, visual and written work, as well as the work of other artists. He founded Love Underground Visionary Revolution (LUVeR) in 1999, a webstation combining live streaming and on-demand libraries of audio and video programming, described by Moore as a "non-corporate, d.i.y., totally uncensored, noncommercial, nonprofit internet-only communal collective with 24-hour 'live' programming (by amazing people) with 'no-limits' content." LUVeR ran until 2012.In 2006, Moore announced his candidacy for the 2008 election for President of the United States. He became a qualified write-in candidate in 25 states. His campaign was responsible for reforming the write-in candidate qualifications and procedures in many states. His platform videos are available on YouTube.Moore also hosted his regular internet show, “Frank Moore’s Shaman’s Den”. Moore describes it as a show that “will arouse, inspire, move, threaten you, not with sound bites, but with a two-hour (usually longer) feast of live streaming video. You might get an in-studio concert of bands from around the world...or poetry reading...or an in-depth conversation about politics, art, music, and LIFE with extremely dangerous people! But then you may see beautiful women naked dancing erotically. You never know, because you are in The Shaman’s Den with Frank Moore.” Video and audio archives of all of these Shaman's Den shows are available online.Frank Moore died of pneumonia on October 14, 2013. Frank Moore performed regularly in the San Francisco Bay Area up until his death. His students and the people influenced by his life/work continue his vision.