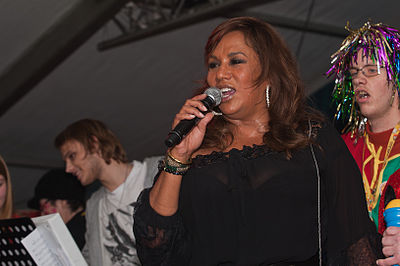 Patty Brard (born Petula Louise Brard in Sorong, New Guinea/Indonesia, on March 25, 1955) is a famous Indo (Dutch-Indonesian) entertainer. She is a TV personality and a singer notable as a member of the girl group Luv'. For three decades, she has often hit the headlines of the tabloid press.In the late 1970s, Luv' scored a string of international hit records such as "You're the Greatest Lover", "Trojan Horse", "Casanova" and "Ooh, Yes I Do". The group reunited in 2005. Since 1982, Patty has been active on television as a host/presenter of Candid Camera-like TV shows such as Bananasplit and Gaan met die Banaan as well as the 1985 edition of the San Remo Festival and the 2001 version of Big Brother. Inspired by the success of The Osbournes, she was involved from 2003 to 2006 in reality television shows that featured her life, the most popular being Patty's Posse. In recent years, she was often invited on famous talk shows (Jensen!, Mooi! Weer De Leeuw, De Wereld Draait Door...). Her funny participation in the ice skating competition Sterren Dansen Op Het IJs was a highly covered event in early 2007. She hosted the entertainment news program Shownieuws between February 2007 and May 2011 on SBS 6. Brard also presented other shows on the same channel: De Nieuwe Uri Geller ("The new Uri Geller"), Wie Ben Ik? ("Who Am I?"), K2 zoekt K3" and "Prins zoekt vrouw".After Sanoma and Talpa had taken over SBS Nederland in 2011, her contract was not extended. In September 2011, she will appear with fellow celebrities Patricia Paay and Tatjana Simic on the RTL 4 reality program Diva's draaien door.