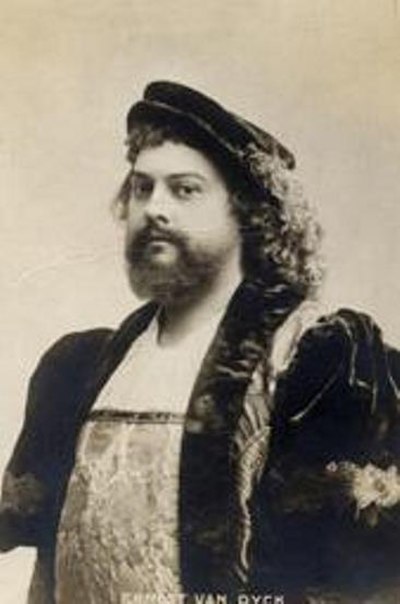 Ernest van Dyck (2 April 1861 - 31 August 1923) was a Belgian dramatic tenor who was closely identified with the Wagnerian repertoire.A native of Antwerp, van Dyck studied both law and journalism before deciding to become an opera singer. He studied in Paris with Saint Yves-Bax before making his debut at the Théâtre Eden on 3 May 1887; the occasion marked the French premiere of Lohengrin. Intensive study with Felix Mottl followed before he appeared as Parsifal at the Bayreuth Festival in 1888, with great success. The intensity of his acting was praised in particular and he was invited back to Bayreuth on repeated occasions, where he became a proponent of the Sprechgesang style of operatic vocalism.The Vienna Opera soon engaged him, and he remained with the company for a decade, also making guest appearances throughout Europe; among these, he featured in the world premiere of Wilhelm Kienzl's Der Evangelimann in London in 1897. Van Dyck made his American debut on 29 November 1898, singing Tannhäuser at the Metropolitan Opera. He stayed in New York City until the 1901-02 season, singing not only Wagner roles but also parts in French operas. In 1907 he managed a season of German opera at Covent Garden, and in 1914 he appeared in the first Parisian performance of Parsifal.Van Dyck made a few acoustic records in the early 1900s (for Pathe, Fonotipia and Homophone) which show a voice prematurely past its prime after a dozen years of hard, declamatory use in heavy Wagnerian parts. He died in Berlaar in 1923. For an appraisal of his recordings and career, see Volume One of Michael Scott's The Record of Singing (Duckworth, London, 1977).