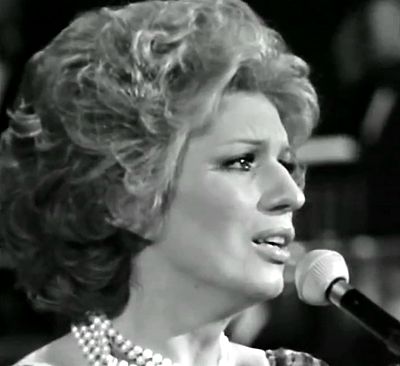 Iva Zanicchi (Italian pronunciation: [ˈiːva dzaˈnikki]) (born in Ligonchio, Reggio Emilia on January 18, 1940) is an Italian pop singer and politician.Iva Zanicchi's career began in 1962 at the Castrocaro Music Festival, where she earned third place. She won the Sanremo song festival in 1967 with Non pensare a me, in 1969 with Zingara and again in 1974 with Ciao cara, come stai?. In 1969, she represented Italy in the Eurovision Song Contest in Madrid with Due Grosse Lacrime Bianche, where she finished 13th. A concert at the Paris Olympia and a tour (United States, Canada, South America and the Soviet Union) followed. Iva later also toured Australia and Japan.From 1987 to 2000 Iva hosted the very popular game show Ok, il prezzo è giusto!, the Italian version of The Price is Right as the only female host in the history of the game show worldwide.In 2004 she was one of Forza Italia's candidates at the European Parliament elections, polling nearly 35,000 but not enough to be elected. However, as the highest-polling among the candidates failing to be elected, Iva took up her seat in Strasburg in May 2008, representing Forza Italia, when EuroMP Mario Mantovani left to become a PdL senator. She was confirmed in her post at the European elections of June 2009.In September 2010 she has expressed her vote in favor of vivisection.