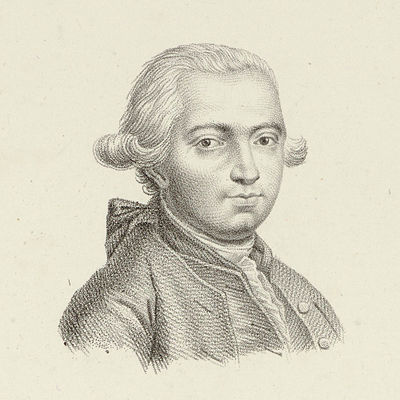 Felice Giardini (April 12, 1716 – June 8, 1796) was an Italian composer and violinist.Felice Giardini (1716–1796) was born in Turin. When it became clear that he was a child prodigy, his father sent him to Milan. There he studied singing, harpsichord and violin but it was on the latter that he became a famous virtuoso. By the age of 12, he was already playing in theater orchestras. In a famous incident about this time, Giardini, who was serving as assistant concertmaster during an opera, played a solo passage for violin, the composer Niccolò Jommelli had written. He decided to show off his skills and improvised several bravura variations which Jomelli had not written. Although the audience applauded loudly, Jomelli, who happened to be there, was not pleased and suddenly stood up and slapped the young man in the face. Giardini, years later, remarked, “it was the most instructive lesson I ever received from a great artist." During the 1750s, Giardini toured Europe as a violinist, scoring successes in Paris, Berlin, and especially in England where he eventually settled. For many years, he served as the concertmaster and director of the Italian Opera in London and gave solo concerts under the auspices of J. C. Bach with whom he was a close friend. He directed the orchestra at the Pantheon C=concerts. He was widely regarded as the greatest musical performing artist before the public. (1755–1770). In 1784, he returned to Naples to run a theater, however, there he encountered financial setbacks. In 1793, he returned to England to try his luck. But times had changed and he was no longer remembered. He then went to Russia, but again had little luck, dying in Moscow in 1796.Giardini was a prolific composer writing for virtually every genre which then existed. His two main areas, however, were opera and chamber music. Virtually all of his music is out of print with the exception of a few songs and works of chamber music. As a string player, he knew how to make string instruments sound their best. His chamber music combines the so-called “Style Galante” with the mid 18th-century classicism of J.C. Bach, the Stamitzes and the Mannheim school. In the “Style Gallant”, the writing emphasizes the soloistic qualities of the instruments, rather than integrated part-writing to create a whole. Giardini, although he did write string quartets and quartets for other instruments—a new and evolving form at the time—, concentrated on writing trios, primarily those for violin, viola and cello of which he wrote at least 18.He married Maria Caterina Violante Vistris, a minor Italian singer in August 1753 in Bramham. Both parties listed their residence at the time as Bramham Park, near Leeds; Bramham was a seat of George Fox-Lane, later created Baron Bingley. His wife Harriet was Giardini's most consistent patron.Felice Giardini is known among Protestant churches for his "Italian Hymn" or "Moscow", which often accompanies the anonymous text to the hymn "Come, Thou Almighty King" and also John Marriott's hymn "Thou whose almighty word".