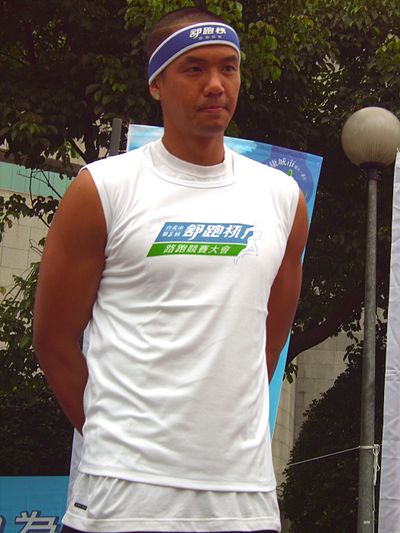 Chen Chien-chou (陳建州) is a well-known Taiwanese performing artist, and a host of numerous variety shows. Because of his dark skin, he has come to be known by the nickname "Blackie". He has been in a relationship with Christine Fan for 10 years, before finally getting engaged in 2010. They were married in Taipei on May 7, 2011.Formerly a professional basketball player, he played for the Chinese Taipei national basketball team from 1998 to 1999 until he prematurely ended his career by tearing his ACL twice in a freak basketball accident. Currently the team leader and head of marketing for the Taiwan Beer Basketball Team, Chen directed a 2008 documentary entitled Attitude (態度) on the team's quest to become Super Basketball League champion. The documentary was well received and earned him widespread acclaim and accolades from the Taiwanese film industry. Many consider it the high-water mark of Taiwanese sports related documentary films.Blackie is also a successful, popular, and well-known television personality and host for several television shows. He is slated to play Peng Dehuai in the highly anticipated miniseries Untold Stories of 1949, to be produced for HBO Asia.He, along with his wife Christine Fan, are also the co-founder and spokespeople for the Love Life campaign, after becoming a Christian, as influenced by her mother-in-law while Cristine was recovering from severe depression.