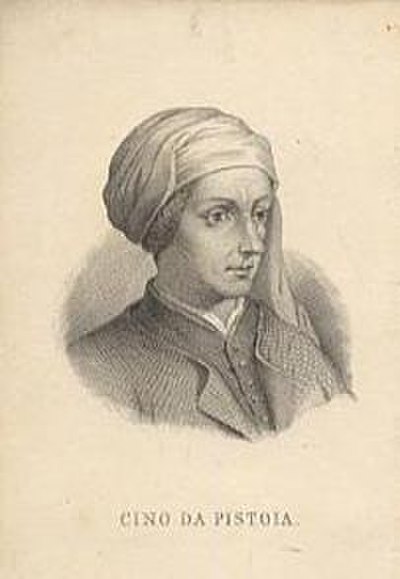 Cino da Pistoia (1270 – 1336/37) was an Italian jurist and poet. He was born in Pistoia, Tuscany. His full name was Guittoncino dei Sinibaldi de Candia Pistoia or, Latinised as Cinus de Sighibuldis, his father was from a noble man from the House of Sinibaldi and his mother a noble lady of the House of Candia Pistoia . He received his doctorate from the University of Bologna, where he studied under Dinus de Rossonis, and taught law at the universities of Siena, Florence, Perugia, and Naples. In 1334, he was elected Gonfaloniere of Pistoia, but did not take up the office. Cino's most important legal work was Lectura in codicem (1312–1314), a commentary on the Justinian Code which blended pure Roman law with contemporary statutes and customary and canon law, thereby initiating Italian common law. He wrote some 200 lyric poems notable for purity of language and harmony of rhythms, most of them dedicated to a woman named Selvaggia. Dante, a friend of his, in De vulgari eloquentia, praised his poetry. Cino was also close to his fellow student Giovanni d'Andrea and was a literary friend of Petrarch.He is the narrator of Ezra Pound's dramatic monologue "Cino."Two of his students were Bartolus (in Perugia) and Francesco Petrarca (in Bologna).