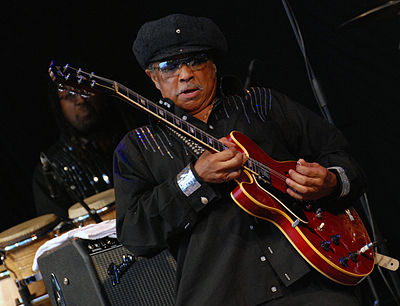 A recipient of five Grammy Awards, Al McKay (born February 2, 1948, in New Orleans, Louisiana) is an American guitarist, songwriter, producer, and former member of the American funk band Earth, Wind & Fire. Al used to lead his own group, Al McKay's L.A. All Stars, with former EWF members Johnny Graham, Fred White (younger brother of EWF founders Maurice White and Verdine White), Rahmlee Michael Davis and Michael Harris of the former Phenix Horns, and Andrew Woolfolk.The group released an album entitled Al Dente through import.Throughout most the '70s and '80s, Al was hired for numerous studio sessions from different artists and produced/composed for various projects, including The Temptations (Truly for You – 1984 / Motown), A Taste of Honey (Ladies of the Eighties – 1982 / Capitol), Finis Henderson (Finis – 1982 / Motown), among many others. His instructional video for Star Licks Productions appeared on VHS in the mid-80s. With a re-designed video sleeve, it was re-issued on VHS during the '90s.He now performs with his band, The Al McKay Allstars, performing a show called The Earth, Wind & Fire Experience, and tours along the major jazz festivals in the world with this 14-piece ensemble. There is also a live DVD from this project, which was filmed in Eastern Europe.Al is a left-handed guitar player.