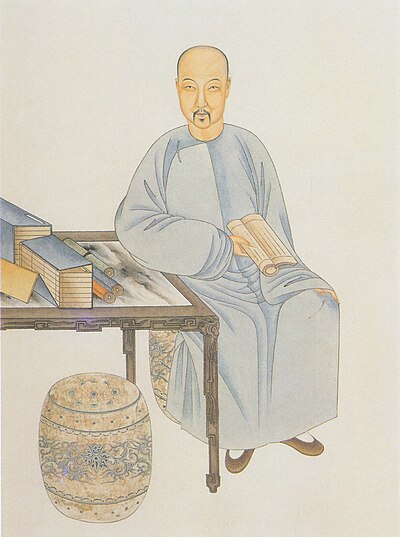 Nalan Xingde (simplified Chinese: 纳兰性德; traditional Chinese: 納蘭性德; Wade-Giles: Na-lan Hsing-te; 1655–1685) was a Chinese poet active during the Qing Dynasty, famous for his ci poetry. He was actually born Nalan Chengde (納蘭成德), but had to change his name when the Kangxi Emperor named Yinreng, whose birth name also had the character cheng (成), the crown prince. Xingde also adopted the courtesy name Rongruo (容若).Born in Beijing in the January of 1665, Nalan Xingde came from a powerful Manchu family that not only belonged to the Plain Yellow Banner of the Eight Banners, but was also related to royalty. His father Nalan Mingzhu, who became Grand Secretary in 1677, was second cousin to the Shunzhi Emperor, and his mother was a daughter of Ajige, Prince Ying of the First Rank, and thus first cousin to the Shunzhi Emperor. Xingde's genealogical origins could have been Mongolian, however, since his clan was originally a tribe of the Mongolian Yehe who defeated the Manchu Nara tribe and adopted their name.He was reportedly a bright child with a talent in writing poetry and essays. Like all Manchu boys, however, he was also taught riding and archery, and was said to be quite proficient in both.By nineteen, he was already enjoying a literary reputation. However, success at the national civil service examination eluded him until 1676, when he obtained the Chin-shih Degree. In contrast to the more common practice of naming a chin-shih a bureaucrat/official, the Kangxi Emperor gave Xingde a military position as a junior grade officer in the Imperial Bodyguard (三等侍衛).Xingde became a close associate of the emperor, perhaps due to their similar ages, and often accompanied the emperor on royal tours of inspection. Later, Xingde was promoted to a higher position (一等侍衛). He was sent on a tour of the northern border to assess the damage caused by the Russian border raids and skirmishes.He died at the age of 31, due to an unspecified illness.When he was 19, he married the daughter of Lu Xingzu (盧興祖), who was the Viceroy of Guangdong. Three years into the marriage, his wife died in childbirth. He later took a concubine whose family name was Yan (顏) and eventually married a woman whose family name was Guan (官). At thirty, he took another concubine, Shen Wan (沈宛), who was a poet of some standing herself. He had at least three sons and several daughters.