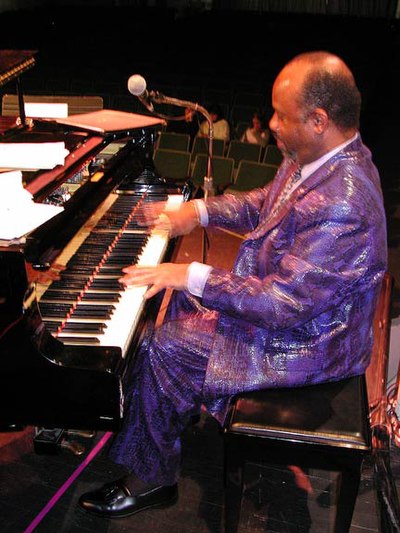 Johnny O'Neal, born October 10, 1956 in Detroit, Michigan, is an American Neo-bop jazz pianist and vocalist. His playing ranges from the technically virtuosic to the tenderest of ballad interpretations. Though unique in style, he is influenced by many jazz elders, including Oscar Peterson and Art Tatum. He has led many recording dates with jazz heavyweights such as Russell Malone and many others. He is a 1997 inductee of the Alabama Jazz Hall of Fame.In 1974, Johnny moved to Birmingham, Alabama and worked as a musician, never needing a day job to make ends meet. In Birmingham he worked with local noted jazz musicians, such as Jerry Grundhofer, Dave Amaral, Cleveland Eaton, and Ray Reach. He moved to New York City to perform with Clark Terry in 1981, and also landed a regular job at the Blue Note, accompanying such greats as Dizzy Gillespie, Ray Brown, Nancy Wilson, Joe Pass and Kenny Burrell. He was a member of Art Blakey and the Jazz Messengers for two years from 1982-1983 and made his Carnegie Hall debut in 1985.On the recommendation of Oscar Peterson, O'Neal portrayed Art Tatum in the 2004 movie Ray, convincingly recreating Tatum's sound on the song "Yesterdays".A 2006 DVD "Tight" captured O'Neal at the height of his powers. Included is an interview with pianist Mulgrew Miller, who stated, “In my generation of musicians there are two who are probably the most naturally talented. They both happen to be from Detroit. One is Kenny Garrett, the well-known saxophonist. The other is pianist Johnny O’Neal.” “There are so many outstanding things about Johnny’s playing. Two or three of the most outstanding: number one, the touch. Johnny has a million dollar touch. Very few people touch the piano like that to get that kind of sound and feeling…. The other thing is his feeling of swing, which is so natural. Then there’s Johnny’s personality, so engaging. And Johnny can play a ballad like few people, if any. I’ve always held his talent in the highest regard, and I think he’s a very special artist.”